In 2010, surgeon Marty Makary pioneered the laparoscopic Whipple at The Johns Hopkins Hospital. Surgical oncologist Jin He, a fellow at the time, attended Makary’s operations and is now using his experience to perform open and minimally invasive Whipples.

Since 2014, Weiss, He and Christopher Wolfgang, director of hepatobiliary and pancreatic surgery, have performed more than 30 Whipples using a robotic approach. Preliminary data show zero infections at the surgery site and oncologic outcomes equivalent to those for open Whipples.

“People may think you leave some tumor behind or you get less lymph nodes with a minimally invasive approach, but our data show equivalent oncological outcomes when the patient is a good candidate,” says He.

Approximately 50 percent of those who have open Whipples at The Johns Hopkins Hospital could be potential candidates for a minimally invasive approach. The robotic approach is appropriate for many cysts and tumors of the pancreas, including intraductal papillary mucinous neoplasms, neuroendocrine tumors and pancreas cancer.

However, Weiss says, each patient is different and has individual needs. Some of the factors the surgical oncologists consider when deciding on a surgical approach include type of tumor, prior surgical history, position of anatomy and major vessel involvement.

Even though the procedure takes longer than an open approach—six or seven hours, compared to three or four—the incision is much smaller. Afterward, patients stay in the hospital for about a week, and the smaller surgical site provides less opportunity for infection and less need for narcotics.

“We are now routinely removing tumors safely with smaller incisions using the laparoscopic and robotic approaches.” 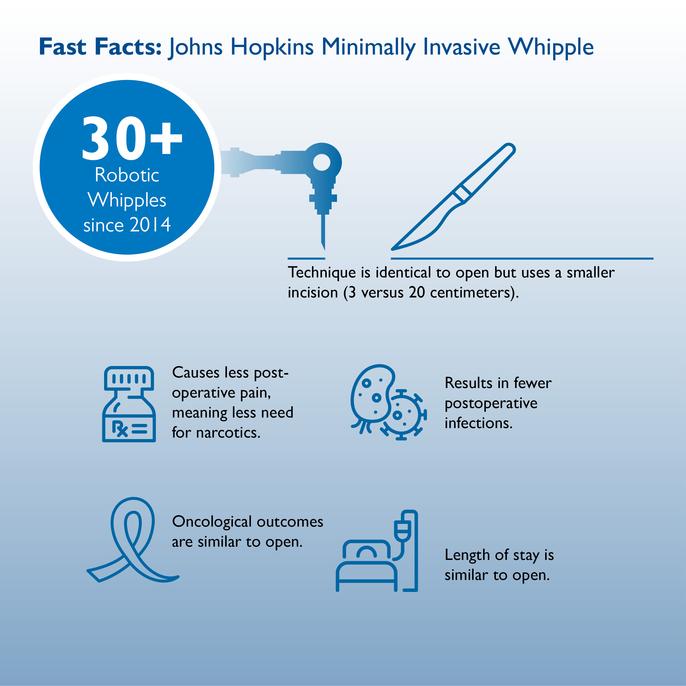