Although the distance between a patient’s room and a hospital unit’s medication room is typically the length of a hallway, that distance can seem far greater when nurses are interrupted nearly every step of the way. Alarms, patient needs, physician requests, phone calls and other right-away demands can turn a simple walk to the medication room into an obstacle course.

Last year, nurses on the Neurosciences Critical Care Unit (NCCU) at The Johns Hopkins Hospital identified a safety problem that resulted from the heavily regulated way in which patient-specific insulin delivery devices—insulin pens—were being handled and stored. They decided to launch a Comprehensive Unit-based Safety Program (CUSP) project to discover how to bridge the gap between the rule and the reality.

The rule: Both Johns Hopkins and the Joint Commission require that, between uses, insulin pens be placed in patient-specific containers in the unit’s medication room.

The reality: Unexpected interruptions often caused nurses to pocket the insulin pen and make a mental note to return it to its regulated container later.

While the storage policy made good safety sense, the CUSP project revealed that the pocketing practice led to medication errors. Now, thanks to the work of the NCCU’s team, eight units throughout The Johns Hopkins Hospital are testing the effectiveness of mounting a clear plastic lockbox directly in a patient’s room to hold a multidose insulin pen.

Designed by Peter Pronovost, director of the Armstrong Institute for Patient Safety and Quality, CUSP is a five-step patient safety improvement program that works by empowering staff members to assume the responsibility for safety in their units. Since beginning at Johns Hopkins in 2001, the program has spread throughout the hospital, the Johns Hopkins Health System and other medical centers around the world.

The Armstrong Institute holds quarterly meetings to highlight and share examples of successful CUSP projects throughout the hospital and to suggest other areas to tackle. An issue that often comes up is finding better ways to prevent patients from falling, says patient safety coordinator Paula Kent.

One recent fall prevention project, based in the hospital’s medical progressive care unit, found that laxatives given to patients without regard to time of day posed a greater risk that patients might fall during unassisted trips to the bathroom at night. The CUSP team proposed only prescribing this medicine during waking hours. It also suggested that nurses execute “purposeful rounding” each hour to assess which individual patients were high risk for falls.

Such results make it desirable to adopt CUSP. Melinda Sawyer, assistant director of patient safety, says the program has taken hold not just at Johns Hopkins—there are now 66 units in the hospital that participate—but at 1,800 hospitals across the United States. Health care facilities in Europe and Asia are also taking up the program and, thanks to a partnership with the World Health Organization, Sawyer will soon travel to Uganda to share CUSP.

“CUSP has been a huge culture change wherever it’s been adopted,” she says. “It’s a way for front-line staff members to point out problems without worrying about how it will affect their jobs.”

At any given time, she says, dozens of CUSP projects are underway throughout The Johns Hopkins Hospital and Health System. At Sibley Memorial Hospital, for instance, 29 CUSP teams have formed since the end of 2012.

One recent success at Sibley is a fall prevention project in the skilled nursing unit where many patients recovering from orthopaedic surgery require assistance. To help educate patients and families, Sibley’s fall prevention team produced a one-page guide explaining that medication, illness and unfamiliar surroundings can all contribute to falls.

“CUSP gets embedded into hospital unit culture pretty easily,” says Laini Talcott, chief of staff at Sibley. “Since it’s unit-based, there isn’t a need to gather hospitalwide committees, which are hard to schedule. CUSP allows local teams to work together.”

“CUSP has been a huge culture change wherever it’s been adopted. It’s a way for front-line staff members to point out problems without worrying about how it will affect their jobs.” 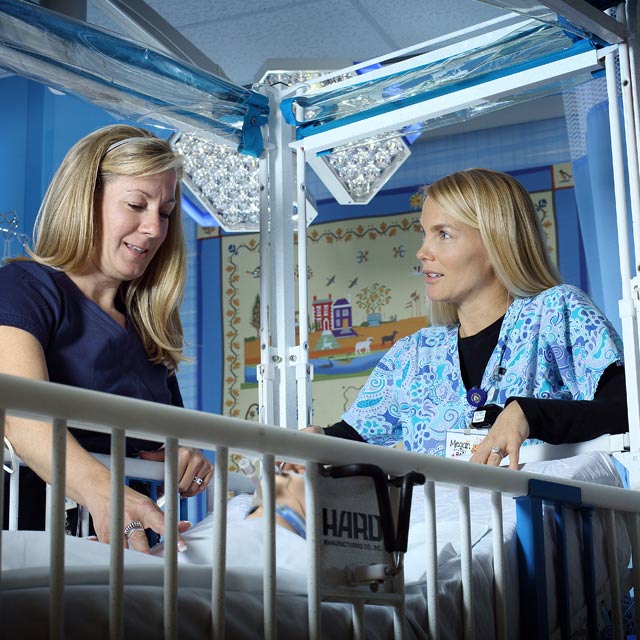 Created and led by nurses, the Building Bridges program brings nurses together to enhance communication and information-sharing between units.
back to top button