Not long after Nicholas “Nick” Sheridan crawled out of his crib, say his mom and dad, they’d find him early each morning — every morning — hitting plastic golf balls around the backyard.

“When Nick was mobile, he decided ‘I’m going to get up and go hit some balls,’” says Chip Sheridan.

Indeed, he never stopped, as his initial joy evolved into a love of the game and a means to socially interact through his middle school and early high school years in Severna Park, Maryland. Like other kids in most things, Nick was different in one important aspect. Due to a congenital anomaly, he was born with only one lung. Also, around 3 years of age he was diagnosed with scoliosis, a sideways curvature of the spine, by pediatric orthopaedic surgeon Paul Sponseller, who has followed the 15-year-old since then. The treatment plan? Bracing, casting and surgery if needed.

“The most important goal of scoliosis treatment is preventing curves from becoming large and requiring surgery,” says Sponseller. “Bracing has an effective role.”

Nick wore a Charleston nighttime brace from ages 3 to 9, then a Mehta cast for three months and a full-time brace from ages 9 to 15. Asked how he tolerated the bracing and casting, he says it was a bit of a distraction at school, like when he’d have to take the brace off for gym class and other kids would pick it up and ask him about it. For the most part, however, he brushes it off.

“It was not too bad; it wasn’t terrible, but I wasn’t enjoying it,” says Nick. “Sometimes it was hard to sleep, and I’d wake up in the middle of the night. But I realized I had to wear it.”

Through all the regimens designed to support and straighten his spine, Nick maintained a normal active childhood encouraged by his parents. He was also determined to keep his eye on the ball at the golf course, having fun but also relishing the work ethic of the game: “I like that there’s always something else to do, something more you can be working on.”

Another appeal of golf, he notes, is the individual responsibility the game demands, especially when you’re playing on a team.

“Everything is on you — when you do something wrong, you can’t blame it on someone else. It’s always your fault,” says Nick, who was undefeated on his high school golf team until the season was cancelled due to the coronavirus. “I kind of like that aspect where it’s an individual sport and there’s a lot of pressure — it’s a very mental game.”

Sponseller was impressed by his young patient’s character in the face of severe scoliosis and only one lung, but concerned about the increasing curvature of Nick’s spine. Although bracing usually works, the absent lung caused the curve to progress anyway.

“He understood what we were asking of him: a commitment to this challenging routine and the hard work of bracing, and the maturity to look at the bigger picture,” says Sponseller. “As he entered adolescence, however, it was clear that surgery would be necessary.”

The question was when, as Sponseller wanted to wait until the optimum age to avoid follow-up operations for Nick. On June 9, two months shy of his 16th birthday, Nick underwent posterior spinal fusion surgery involving 11 vertebrae — two lumbar and nine thoracic — with the aid of intraoperative neuromonitoring to reduce the risk of nerve damage. Sponseller also performed discectomies to remove any herniated disc material pressing on nerve roots and the spinal cord.

Nick’s biggest concerns? “Will it hurt day to day, and what’s my golf swing going to look like?”

“There were no complications, he had an excellent correction of his curvature from 95 degrees down to 10 degrees, and he gained 3 inches in height,” says Sponseller: “His recovery was completely uneventful, as though he had two functioning lungs instead of one, and he went home after three days in the hospital. We don’t anticipate the need for any additional surgery.”

For Nick, the best news?

“Enough mobility of his lumbar spine was preserved to allow him to play golf normally,” says Sponseller. “He’s allowed to start playing in six weeks.” 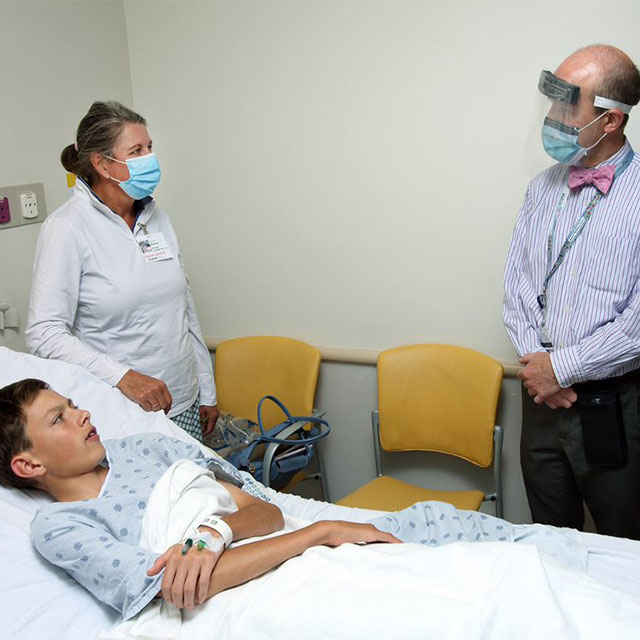