From the day the Johns Hopkins University School of Medicine opened its doors in 1893 to 18 students—three of them women—it has pursued a mission to create a worldwide legacy of education, research and patient care.

To celebrate that 125-year history, hundreds of faculty, staff, students and alumni came together on June 1 in Turner Auditorium on the East Baltimore campus for a symposium that featured remarks from university leaders and elected officials, as well as video highlights recounting the medical school’s impact in Baltimore, and the state of Maryland, nation and world. The symposium was one of many events throughout the school of medicine's 2018 reunion and alumni weekend, aptly themed "Home to Hopkins."

Speaking on the theme, “Where Tradition Meets Innovation,” Johns Hopkins University President Ronald J. Daniels and Paul B. Rothman, dean of the medical faculty and CEO of Johns Hopkins Medicine, shared what distinguishes the institution from other academic centers: pioneering research that has led to treatments for conditions such as sickle cell anemia, Lou Gehrig’s Disease and Marfan’s Syndrone; a medical curriculum for students that, from the very beginning, has offered hands-on training in the lab and at the bedside; and curious faculty members who have earned international recognitions such as the Nobel Prize and Lasker Awards.

In more recent years, Johns Hopkins physicians and scientists are responsible for the lifesaving infection prevention checklist, a five-way kidney transplant and bilateral arm transplant, and advances in attacking the Zika virus’ relationship with microcephaly, and cancer immunotherapy. View a timeline video of some of our breakthroughs.

Dean/CEO Rothman spoke about feminist and philanthropist Mary Elizabeth Garrett’s role in Hopkins history. Garrett, he reminded, contributed the final and largest portion of cash needed to establish a medical school that required that women and men be admitted with the same qualifications.

Reflecting on his tenure as dean/CEO, Rothman said, “It is a unique institution. I’ve been here for six years and it’s the only medical center I know of where the word ‘cure’ is used not randomly, but often, because that's our goal: to cure human suffering and diseases.”

Daniels said, “The Johns Hopkins School of Medicine has never lost sight of the deeply humane objectives that William Welch and his fellow founder and successor as dean, William Osler, committed to 125 years ago: to pursue discovery in the advancement of human welfare, or more simply with focus always on the patient.” He added, “From this core principle have emerged discoveries ranging from the targeted use of radiation to treat cancer, to the modern pregnancy test to the creation of the field of medical genetics, which now provides the foundation for our Genes to Society curriculum—the embodiment of the schools’ commitment to reimagine medical education in the 21st century.”

Also participating in the program were Maryland Governor Larry Hogan and Baltimore City Mayor Catherine Pugh, who spoke on the state and city’s partnership with Johns Hopkins, the largest private employer in Maryland.

After going through a list of how the state supports health care, Hogan thanked Johns Hopkins for its collaborative efforts to expand health care access and affordability to improve the quality of life for Marylanders.

Pugh praised Johns Hopkins for its partnership on programs such as one that promotes healthier babies and another that provides free eye exams and eyeglasses to students in need. Calling “health a critical lever for social justice,” she challenged the school of medicine to work toward more innovative ways to tackle opioid addiction.

Advances at the School of Medicine

Roy Ziegelstein, vice dean for education, spoke about advances at the school of medicine since he came to Hopkins as an intern in 1986. They include:

Later the vice dean moderated a panel with several generations of school of medicine affiliates who discussed their experiences as students and trainees. Topics included technological advances, opportunities for women, maintaining a healthy balance between work and personal life, and the importance of social determinants of health.

Six Johns Hopkins Medicine leaders were recently honored with portraits that will remind future generations of their legacy. The likenesses of William A. Baumgartner, Gary W. Goldstein, Karen B. Haller, Michael J. Klag, Ronald R. Peterson and James L. Weiss were revealed at a symposium honoring the school of medicine’s 125th anniversary on June 1. They are part of a collection of approximately 360 commemorative portraits of individuals associated with the major health entities of Johns Hopkins—The Johns Hopkins Hospital, The Johns Hopkins Health System, Johns Hopkins Medicine, and the Johns Hopkins University schools of medicine, nursing, and public health. Watch a video of the award and portrait presentations.

William A. Baumgartner, vice dean for clinical affairs and president of the Clinical Practice Association, painting by Peter Egeli. 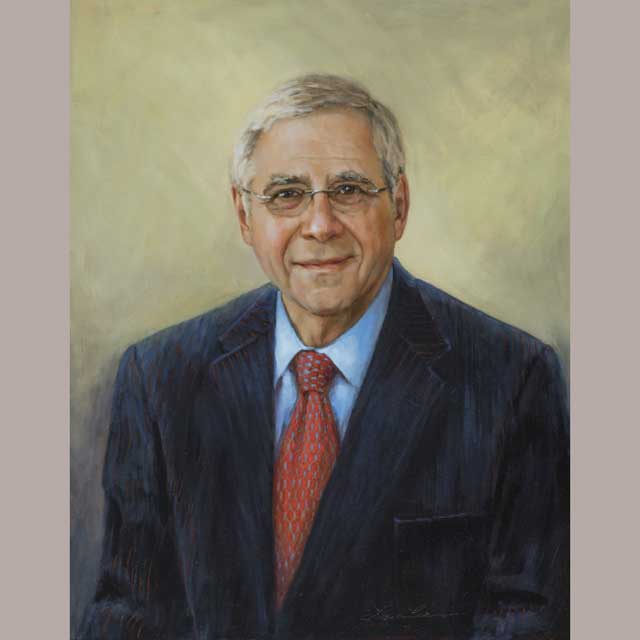 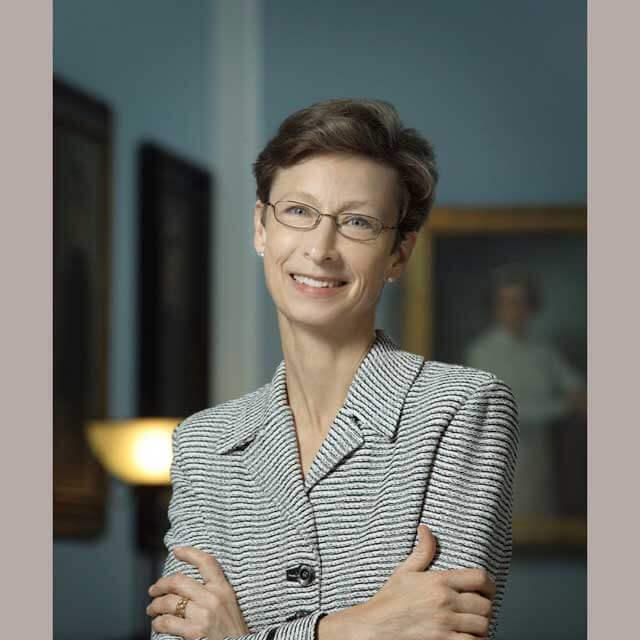 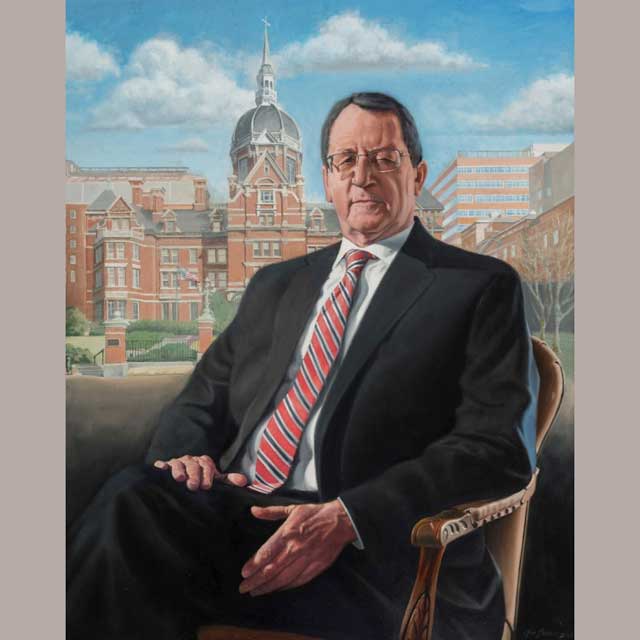 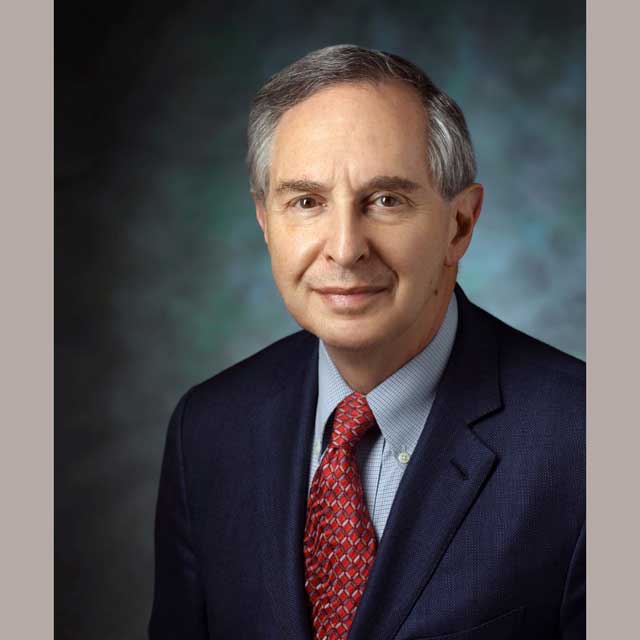 The Johns Hopkins School of Medicine has never lost sight of the deeply humane objectives that William Welch and his fellow founder and successor as dean, William Osler, committed to 125 years ago.

The symposium, which also included a presentation of alumni awards and an unveiling of portraits of Johns Hopkins leaders, is part of a series of events to commemorate the milestone anniversary. Chief among them is an anniversary pop-up museum, on display at the event, which consists of nine eight-foot interactive displays that take viewers on a nostalgic trip through Johns Hopkins’ history.

Black and white pictures of the institution’s most renowned researchers paired with tidbits of history provide snapshots of singular moments—such as the correspondence of the medical school’s feminist co-founders and memorabilia from the opening of the Phipps Clinic, which brought inpatient psychiatry to Johns Hopkins.

History is not the only thing on display in the exhibit. An augmented reality magic mirror allows users to obtain a virtual view inside their own bodies. And those who aren’t afraid of heights can get a view from the top of the Dome Building by putting on a 360-degree virtual reality headset.

Visit the pop-up museum in the southern corridor of Turner Concourse through October 2018.

An employee tests out the augmented reality feature of the Pop-Up Museum.
back to top button