Ryan England believes that a volunteer’s own passions, skills and life experiences inspire the kind of service that has the most impact. As a runner and a sailor, he has been a medical volunteer for marathons in New York City, and a volunteer in Baltimore for helping children with special needs learn how to sail.

England served as an officer in the Navy before deciding to become a doctor. Now, with an interest in global health, he has combined his military and medical experiences to serve as a volunteer with RAD-AID International, a nonprofit global health organization that aims to improve access to radiology in developing regions around the world.

In 2016, while he was at Columbia University College of Physicians and Surgeons, England began his service with RAD-AID as its first global health radiology medical student scholar. After participating in a medical outreach mission to Cape Verde, Africa, he became manager of flight operations for RAD-AID’s medical airship program, an effort aimed at delivering imaging services to underserved regions.

Now in his third year as a radiology resident at the Johns Hopkins University School of Medicine, the Massachusetts native made it his mission to reinvigorate the Johns Hopkins RAD-AID chapter, which now has more than 50 members with multidisciplinary roles, such as nurses, attending physicians, and sonographers

“I thought it was important to get others involved in volunteering and global health,” says England, who in 2023 will complete his residency training specializing in interventional radiology. “It’s not so much what I can do alone -- when others get together for a common goal, we can accomplish so much more.”

For the past four years, he’s directed global outreach planning in low-resource areas such as northern Canada, Alaska and South Africa, to determine where medical imaging is most needed. “It’s not about dropping off a CT scanner, saying you’re welcome, and leaving,” England says. “It’s about a more sustainable approach to radiology outreach, focusing on things like education, teaching, and providing an imaging modality to [local health care providers] that can most help [underserved populations].”

“I thought it was important to get others involved in volunteering and global health. It’s not so much what I can do alone -- when others get together for a common goal, we can accomplish so much more.” 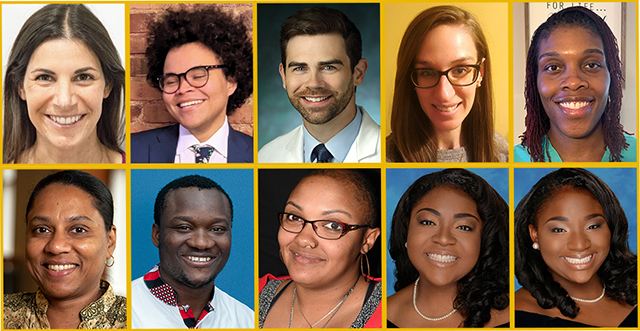 Eight Johns Hopkins Medicine and University faculty and staff members were selected for volunteer work and recognized with the 2020 Martin Luther King Jr. Community Service Award.
back to top button