When Wendell and Rose Eve got married 25 years ago, police closed off streets in their home city of Hamilton, Bermuda, as some 1,200 people danced and celebrated into the morning.

On May 23, the couple marked their anniversary by renewing their vows. The event was much smaller, with about 30 people gathered in front of the iconic statue of Jesus in the Billings Administration Building of The Johns Hopkins Hospital.

But it was even more meaningful than their wedding, the couple said. “He’s alive,” said Rose. “God has brought him through. We are so thankful for the visits from friends and prayers from all over the world, including our bishop, Vernon Lambe, in Bermuda."

The Eves, who have two children and two grandchildren, were planning a vow renewal ceremony in Bermuda, complete with a reunion of the wedding party and a late-afternoon brunch.

But on April 18, Wendell collapsed while taking a shower. The previously healthy 55-year-old public roads superintendent, who was also on 24-hour call for the police department and served as the right-hand man for the bishop, had suffered an aortic dissection, a tear in the artery that brings blood from the heart to the organs. As a result, he lost blood flow to his lower extremities, severely damaging his kidneys and intestines.

He was rushed by ambulance to Hamilton’s King Edward VII Memorial Hospital and airlifted the next day to The Johns Hopkins Hospital, where surgeons John Conte and James Black repaired his aorta, heart, and the circulation to his intestines and legs.

Though his odds for survival started in the single digits, Wendell got better as the rehabilitation team helped him regain strength and function. He is expected to return to Bermuda in early June.

Rose, by his side every day, never gave up hope, "because of our strong faith in God," she said. She also never abandoned her plan of exchanging vows on their anniversary day. She thought she would stand by his bed to do it.

Then the staff of the Department of Physical Medicine and Rehabilitation got involved.

They had to work fast because they found out about the vows on Friday and the anniversary was the following Tuesday. Members of the rehabilitation unit volunteered to bring in food and decorations. Help also came from Antoinette and Charles Jeffers, family friends who moved from Bermuda to Arlington, Virginia, and have been at the hospital constantly.

On the big day, Rose put on a floor-length green and blue dress and walked with Antoinette to the statue of Jesus. “I didn’t know what to expect,” Rose said.

When she got there, her husband of 25 years was waiting in a wheelchair, wearing a button-down shirt, a blue tie and a boutonniere of blue flowers. Gathered in a semicircle were friends, surgeons, nurses and other caregivers.

Wendell leaned on a walker during the vows, then returned to his wheelchair to exchange rings with his wife.

The couple then went to Meyer 7, where the kitchen had been decorated with silver and white balloons for the reception. One table held a three-tiered wedding cake and silver-framed photos of the couple’s family and 1992 wedding. Another held cookies, chips and other snacks.

The bride and groom, wiping away tears, sipped sparkling cider from plastic champagne flutes. They thanked everyone in the crowded room and promised to return for a visit.

“The first time I met Mr. Eve, his wife was not in the room and his eyes filled with tears as he spoke about her in the most adoring way,” said Feldman. “I’m so happy we could do something really special for them.”

For more than 20 years, hundreds of Bermudians like Wendell Eve have traveled to Baltimore for health care at The Johns Hopkins Hospital. The trip is eased by a concierge service in Baltimore that coordinates travel, accommodations and treatment.

And through a collaboration with the Argus Group, which provides health insurance to one-third of Bermudians, Johns Hopkins Medicine experts serve as consultants on a case management program that connects patients with condition-specific interventions.

The Force Is Strong at the Johns Hopkins Children’s Center

Seven local Star Wars volunteer characters spent the day at the Charlotte R. Bloomberg Children’s Center with one common goal: to make patients forget they were in the hospital. 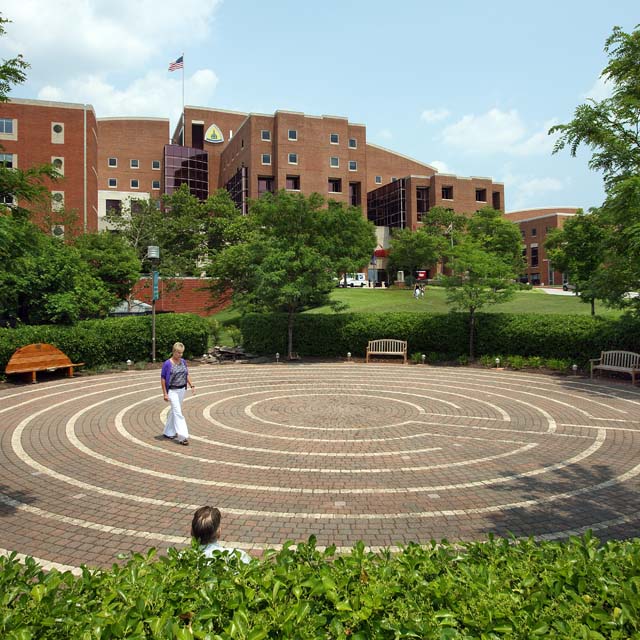 The labyrinth at Johns Hopkins Bayview Medical Center offers a path for quiet contemplation.
back to top button