Physiatrist Pablo Celnik is accustomed to getting referrals for sophisticated patients. What he is not used to is receiving referrals for patients accompanied by a film crew—until now, that is.

In January 2016, Celnik was contacted by a University of Tokyo neuroscience researcher, Daichi Nozaki, who was involved with producing a health and science documentary film. Nozaki wanted to learn how a Baltimore-based Paralympian, who was being featured in the film, could become a competitive swimmer despite left hemiparesis.

The Paralympian, 24-year-old Cortney Jordan, has a history of spastic cerebral palsy due to a stroke that occurred at birth. Despite her medical challenges, she is a two-time U.S. Paralympian with eight medals and numerous world records.

Nozaki asked Celnik if he would evaluate Jordan to see if the left hemisphere controls her left arm in the same way it controls her right arm. Celnik, a well-known neurological rehabilitation scientist with clinical expertise in stroke and traumatic brain injury, agreed to assess Jordan and try to uncover how her motor cortex functions.

In February, the film crew visited Baltimore and filmed Jordan swimming and exercising while Celnik monitored her behavior. They then went to the Johns Hopkins Human Brain Physiology and Stimulation Laboratory.

For Nozaki, the finding explained how Jordan can perform freestyle and backstroke but is unable to do other strokes. For Celnik, Jordan is a testament to the idea that understanding how the brain controls behavior is critical to finding the appropriate target to deliver novel, scientifically based neurorehabilitation interventions.

“Most people recover proportionally to the original damage caused by a stroke,” says Celnik. “Traditional rehabilitation allows patients to return to functioning individuals in society—regaining the ability to speak, dress themselves, drive a car and go to work. At Johns Hopkins, we are working very hard to augment the process of neurological recovery.”

With a keen interest in understanding and improving motor function in patients with brain lesions, Celnik, neuroscientist Amy Bastian and neurologist John Krakauer are developing a state-of-the-art outpatient neurorehabilitation clinic. The joint venture between the departments of Neurology, Neuroscience, and Physical Medicine and Rehabilitation will pair brain stimulation techniques with interventions involving robots, immersive games and special treadmill exercises.

“We want to provide interventions that will help patients with more than just functional recovery,” says Celnik. “We want to enhance the return of ‘normal’ neurological function while we maximize the function of the individuals. Potentially, patients could become high-achiever athletes, just like Cortney.”

As a clinician-scientist in the Department of Physical Medicine and Rehabilitation, Pablo Celnik’s most pressing question is, “How can you enhance motor function in patients with and without neurological damage?”

Most recently, Celnik gathered several colleagues investigating cerebellar noninvasive brain stimulation to summarize how cerebellar transcranial direct current stimulation (ctDCS) can become a viable intervention for patients with neurological conditions. They found evidence suggesting that ctDCS could influence motor, cognitive and emotional behavior. If so, the intervention could provide an option for cerebellar ataxias, which currently lacks effective alternative treatments.

“This work is bringing us closer to new treatments that could promote recovery of motor function following an injury,” says Celnik. 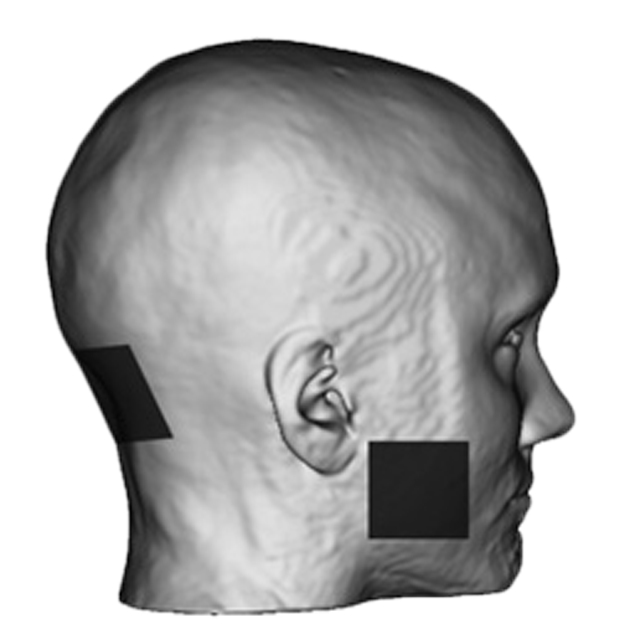 In cerebellar transcranial direct current stimulation, one electrode is centered over the right cerebellar cortex and the other is placed on the right buccinator muscle.
Learn More