For the past 3.5 years, the 49-year-old Northern Virginia resident has been battling metastatic metaplastic breast cancer, a rare and aggressive form of the disease that, in her case, initially presented as redness and skin irritation rather than a lump in the breast.

When Pam was diagnosed, she also learned, via genetic testing, that she has the BRCA1 mutation, an inherited gene mutation that predisposes the carrier to a higher risk of developing breast and ovarian cancers. While this information presents a burden to patients, who now realize their family members may also share this genetic predisposition to cancer, it’s also beneficial.

The ability of experienced clinician-scientists to glean information about a patient’s genetic makeup and, subsequently, evaluate the potential benefit of targeted, experimental therapies is especially important in complex cases like Pam’s, in which standard radiation, chemotherapy and surgery are not enough to keep the disease in check.

The promise of this type of individualized care, known as “precision medicine,” has proven a bright spot on Pam’s turbulent cancer journey, during which she’s had to cope with her own overwhelming and ever-shifting medical circumstances, but also those of others who are near and dear to her.

A world suddenly turned upside down

Pam’s personal foray into the seemingly relentless world of cancer began on Thanksgiving Day in 2013, when she and her mother were volunteering at a local “turkey trot” foot race. At the event, her mother, who Pam describes as her best friend, suffered a seizure. That led to a stint in the hospital, where she was diagnosed with stage 4 lung cancer.

“The wheels came off, and we were free falling,” says Pam, a single marketing consultant who quickly became her mother’s strongest advocate and caregiver. About six months later, Pam was diagnosed with metaplastic breast cancer. It was May 4, 2014—the day before the festive holiday known as Cinco de Mayo.

The next year was a blur of medical appointments and procedures. Pam received treatment at Inova Fairfax, a local community hospital close to home. She received chemotherapy, then surgery, followed by radiation. After genetic testing identified her as having a BRCA-1 mutation, putting her at higher risk for breast cancer recurrence and ovarian cancer, Pam underwent a double mastectomy and a salpingo-oophorectomy, a procedure to remove a fallopian tube and ovary. Then there was more chemotherapy, and a few blood transfusions.

Pam reflects on the summer of “mother–daughter chemo” in 2014, when both she and her mother were receiving chemotherapy in different parts of the same hospital.

“That first day when I walked across the courtyard from my chemotherapy, into the building where my mother was getting her treatment, it was quite overwhelming,” she says.

This admission is about as close as Pam ever comes to expressing self-pity. She doesn’t complain about any of the crushing side effects of cancer treatment. Of the two unanticipated blood transfusions she received along the way, she does acknowledge that period as “fairly difficult.” In all, she counts 400 doctor appointments between her and her mother during that time.

Pam found the will to keep going, even when her mother succumbed to cancer in August of 2015. During her mother’s final days, Pam began noticing the return of telltale signs of metaplastic cancer: redness in her skin.

“Chemo was not taking care of it. I asked my oncologist, Dr. Mary Wilkinson, about some of the experimental treatments we’d been reading about. She referred me to Dr. Ben Park at the Johns Hopkins Kimmel Cancer Center,” Pam says.

Soon afterward, Pam met with Dr. Park, a breast cancer expert who also was among the world-renowned group of Kimmel Cancer Center scientists who deciphered the genetic blueprint for breast cancer.

“He was fantastic. He recommended me for a trial using a PARP inhibitor targeting the BRCA1 mutation,” Pam recalls. PARP inhibitors are a form of targeted therapy that works by preventing cancer cells from repairing their damaged DNA, causing the cells to die.

“Pam not only had the BRCA1-related cancer, but also an unusual type of breast cancer that’s very aggressive and doesn’t respond well to traditional chemotherapies. Getting on a trial for a PARP inhibitor made perfect sense for her,” Park says. “Or so we thought.”

Ultimately, Pam was unable to join the clinical trial because metaplastic breast cancer presents as a skin disease. The doctors running the trial were concerned they would not be able to evaluate responses, which are usually measured by reductions in tumor size.

“There are a lot of trials, but there are also a lot of eliminating factors. You can get your hopes up, and they can be dashed,” Pam says. Though she acknowledges the emotional rollercoaster cancer has taken her on, she adds, “You have to move through these things pretty quickly and advocate for yourself.”

Pam’s resilience has kept her open to new possibilities that, in turn, have proved beneficial.

After Pam was unable to join the initial study, Dr. Park found a different to treat her with a PARP inhibitor. Dr. Park instead used PARP inhibitor approved for ovarian cancer in what is called an “off-label use.” This simply means he used the drug for a different cancer than the one for which it received FDA approval. Parks decision represents a changing tide in cancer medicine, where drugs are prescribed because they go after the unique characteristics of the cancer, regardless of where it starts in the body. In fact, Kimmel Cancer Center research recently led to the first ever FDA approval of a cancer drug for all cancers that has a specific genetic defect, regardless of where they occur in the body.

Pam took the drug for 18 months, tolerating the targeted treatment well and enjoying a bit of a respite, feeling, in her words, “pretty good.” That was in 2016.

Pam’s skin redness vanished within a month, but then very slowly it began to return. At this point, both doctors agreed that the PARP inhibitor was keeping the cancer “relatively stable” and the best course was to stay on it and monitor Pam closely.

However, by early 2017, Drs. Park and Wilkinson agreed that it was time to change treatments after a new suspicious lymph node appeared in a scan. Off the PARP inhibitor for a few weeks, Pam was accepted into a trial, but only briefly.

Explaining that this new discovery means she now has Stage IV cancer (doctors determined it was a metastasis from the original tumor), Pam injects a bit of her customary humor into the story. “In the middle of all this, my 11-year-old mix dog is diagnosed with canine breast cancer, and I thought my life has become a country song,” she says.

What she refused to do was give up.

After surgery, radiation and chemotherapy for her brain tumor, Drs. Wilkinson and Park ordered some additional testing. They showed the cancer’s hormone receptors changed, converting from triple negative, for which there are currently no standard-of-care drugs effective at suppressing the growth of the cancer after the traditional methods of chemo, radiation and surgery have been utilized, to 60 percent hormone receptor-positive.

“We always check hormone receptors in case they change because they change in about five to 10 percent of patients,” says Park. “This was he case for Pam, and it opened up new therapy options for her.”

The ability of clinician-scientists like Park to track the evolution of this complex and ever-changing disease, and subsequently interpret the best available treatment options along the way, gives hope to patients like Pam Fitzgerald.

“My hope is that we can convert this to a chronic disease, to be able to treat it indefinitely, so that more patients will die with it than from it,” Park says.

For now, patients like Pam find themselves on the cusp of this new frontier in cancer treatment, which acknowledges the disease’s complexity and varied genetic landscape and recognizes that targeted, individualized therapies are the best defense against it.

“We’re kicking the can, riding the wave of these new treatments that are coming out,” Pam says. “We’re very fortunate to be in a time and a place in medicine when so much has been learned and new drugs are coming out. I feel privileged to benefit from this work, knowing that people like Dr. Park are working hard to change the face of this cancer, and if not cure it, keep it in a chronic state.”

Pam says she is impressed with the advances made since her diagnosis. “When I look at the progress of gene sequencing, targeted therapies and immunotherapy, I am so impressed. When you are a patient like me, fighting metastatic cancer, it brings such hope.” 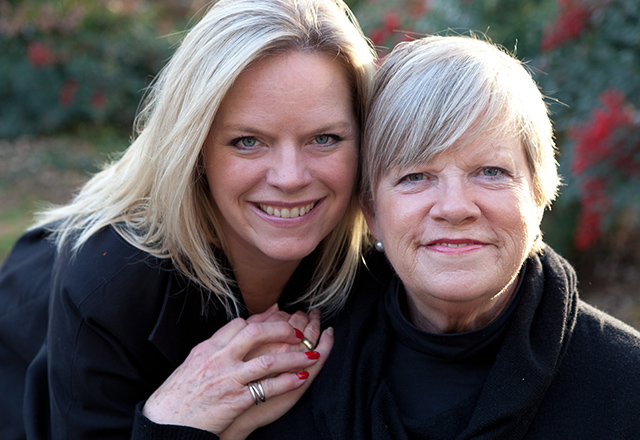 Pam Fitzgerald, left, with her mother.
back to top button