Earnestly constructing models of lungs from balloons, straws and tape, Golden Ring Middle School students replicated the respiratory system. They were shown that when the straws were constricted, similar to when someone uses electronic cigarettes or tobacco, air couldn’t reach the balloon lungs. This easy-to-understand lesson is part of the Lung Health Ambassadors program.

“It was cool that we got to do an activity where we interact with stuff,” says student Franchesca Badrina, a seventh grader. “It helped me understand it better.”

More than 1 in 4 high school students in the U.S. use e-cigarettes, according to preliminary results from the Centers for Disease Control and Prevention’s 2019 National Youth Tobacco Survey. Among high school students, 27.5% reported using an e-cigarette in the previous 30 days, up from 20.8% in 2018. Fruit, menthol and mint flavors were by far the most popular flavors, with more than 60% of teens who vaped saying they used them.

“They get so much information thrown at them in school, it’s hard to memorize it. It has more meaning when you do it. It just stays with you,” Rubin says.

The Lung Health Ambassadors initiative aims to teach students about lung health and the consequences of electronic cigarettes and tobacco on the lungs. It also encourages students to raise awareness with their peers and families of the danger of electronic cigarettes and trains them to manage peer pressure. Students participate in five one-hour sessions over the academic year, culminating with a graduation from the program.

The program is sponsored by Medicine for the Greater Good and The Baltimore Breathe Center, both part of Johns Hopkins Medicine. Medicine for the Greater Good aims to promote more effective communication with the lay public. It also encourages physician engagement in communities while providing trainees with an understanding of the social determinants of health. The Baltimore Breathe Center explores how environment impacts lung disease and disease management.

“When I was younger I didn’t have anything like this,” says Rubin. “It’s one thing to learn about health science from your science teacher, but it’s totally different to learn from doctors, nurses and respiratory specialists. It really reinforces that what they’re learning is important, and they see how it’s used in practice.”

Rubin says she wants to help the students make good decisions about their lung health.

“They’re still learning how to make choices and decisions,” Rubin says. “We teach them that the only thing that should be going into their lungs is air. That can be really hard for them if they have family that smokes on a regular basis. I think it’s brave of them to go back to their family members and share what they’ve learned. It’s exciting to know that they’re the ones who are going to make a difference.”

“It brings everything full circle and helps them understand the gravity of lung health,” he says.

Galiatsatos, who was a Baltimore City student himself, says the program is also effective because the students get to meet and chat with medical professionals. After the sessions, Galiatsatos says many of the students say they want to become nurses and doctors.

“Being in the classroom with them helps ignite the possibility that they can become health care professionals,” he says. “We show them that it’s doable, and we make these higher educational outcomes seem achievable.”

“It’s really inspiring for the students to see what they have achieved,” she says. “They have the opportunity to ask questions, and it helps them make connections.”

Seventh grader Taylor Fitch says it was cool to meet a real doctor.

“You know they know what they’re talking about,” Fitch says. “It definitely informed me that it can be deadly, and I learned the consequences it can have on your health. I don’t think I will vape.”

Seventh grader Idrissa Danquah says even before the classes, he didn’t want to vape.

“They just added to the reasons why I shouldn’t vape,” he says. “They thoroughly explained how tobacco products are wrong, and taught us how to spread that message to other people. They showed me that I’m on the right side, and I know what I’m doing.”

“We are catering to adolescents who can make wrong decisions right now, and those decisions will impact them throughout their lifetimes,” she says. “This is really a lifesaving event because they are learning now how to have healthy lives.”

“It’s one thing to learn about health science from your science teacher, but it’s totally different to learn from doctors, nurses and respiratory specialists. It really reinforces that what they’re learning is important, and they see how it’s used in practice.” 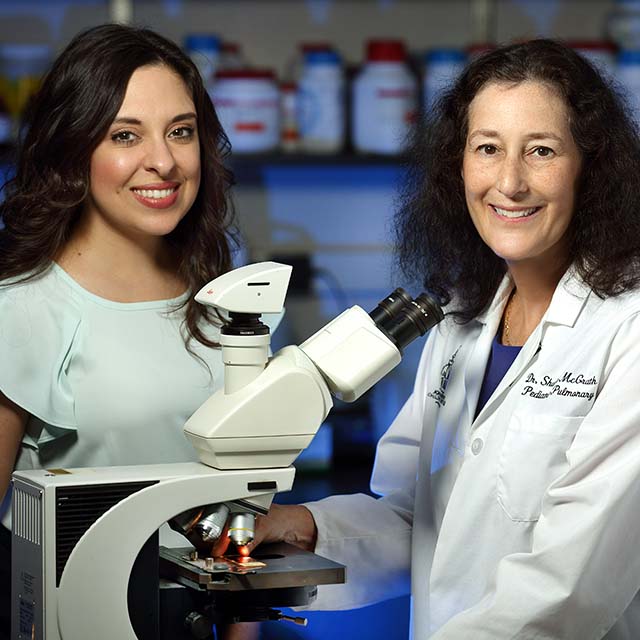 Exposing the Ill Effects of E-cigarettes

Well before recent news reports of people across the country being admitted to hospitals with sudden and severe lung injury related to vaping, Johns Hopkins pediatric pulmonologists were studying vaping’s impact on lung development in children.