Just before Fox’s anesthesia was administered, Nicholas Theodore, M.D., M.S., head of the Department of Neurosurgery’s Spine Division, introduced the actor to the personnel gathered around the operating table.

“This is the A-team,” Theodore reassured his patient. “It’s like fantasy football, Mike. I pick the best of the best,” Fox recalls in his new bestselling book, No Time Like the Future: An Optimist Considers Mortality.

It was April 4, 2018. After contending with Parkinson’s disease for nearly 30 years, Fox had come to Johns Hopkins for removal of a tumor on his spinal cord that was unrelated to his neurological disease. Although benign, the large growth was threatening the 57-year-old actor with paralysis.

The procedure to remove it was “not one that a lot of doctors were eager to tackle,” Fox recalled recently in a telephone interview.

Theodore said he would.

During the five-hour operation, the Johns Hopkins neurosurgeon succeeded in removing the tumor — a major surgical feat that he says was “one of the most difficult” procedures he has ever performed.

Fox’s book, which describes this successful operation, offers praise not only for Theodore but also for Johns Hopkins.

“All the wonderful things I can say about Johns Hopkins — and I’ll say them — start with Dr. Theodore,” the actor says. “Everybody on his team, from the tip of the spear down, was just fantastic. I felt like I was in the best place in the world to be.”

Theodore’s bona fides had promptly impressed Fox — he jokes that after looking over all the diplomas and citations in Theodore’s office, he thought, “Slacker!”

After graduating from Georgetown University’s medical school in 1991, Theodore spent several years in the Marines, including as head of the largest neurosurgery practice in the Navy: the neurological surgery division at the Naval Medical Center in San Diego.

Before joining the Johns Hopkins faculty in 2016, Theodore was the director of neurotrauma at the Barrow Neurological Institute in Phoenix. He also was the team neurosurgeon for the NFL’s Arizona Cardinals and a consultant for the Diamondbacks baseball team and the Coyotes hockey team.

In April 2018, the NFL appointed Theodore to lead a committee of independent and NFL-affiliated physicians and scientists, including advisers for the NFL Players Association. The committee brings together some of the foremost experts in brain and spinal trauma to advise the league on neuroscience, concussion, and other health and safety issues.

The tumor that Theodore and his A-team were going to battle began in the ependymal cells that line the spinal canal through which flows cerebral spinal fluid. Spotted years earlier, it was benign and dormant then, but suddenly it began to grow. An operation to remove it was necessary — or complete paralysis would ensue.

Fox had conferred with other neurosurgeons and neurologists, but he says he knew almost immediately when meeting Theodore that he was the man for the job.

“He was just so impressive,” Fox recalls. “He was so able to tell me what my situation was, what my likely outcomes were, and what the risks were and the benefits were. He was really upfront about it.

“And he had a sense of humor.”

When the actor pointed out that other experts had shied away from performing the operation, Theodore replied, “Who wants to be the guy who paralyzes Michael J. Fox?”

“That was a really great icebreaker,” Fox says.

The Canadian-born actor first captured the public’s eye in 1982 as Alex P. Keaton, the right-wing son of former hippies in the classic TV sitcom Family Ties. He soared into superstardom as Marty McFly in the blockbuster Back to the Future film series, which launched in 1985, and he later returned to television by portraying the despicable lawyer Louis Canning in The Good Wife, the barbiturate-gobbling paraplegic Dwight on Rescue Me and deputy mayor Mike Flaherty on Spin City.

Theodore has operated on other celebrities, including prominent professional athletes, and concedes that it involves extra pressure. He says Fox’s case will “forever be emblazoned in my mind.” The neurosurgeon found an “extremely large tumor taking up 99% of the spinal canal, with the normal spinal cord being flattened to only a millimeter or so.” Adopting a “Zen mode,” he focused on nothing except removal of the tumor, millimeter by millimeter.

The surgery was deemed a success by all. Although damage done to Fox’s spine before the operation could not be reversed, “the big deal was that it wouldn’t go any further, and it hasn’t,” Fox says. “Suffice it to say, I’m in much better shape than I would be if I hadn’t had Dr. Theodore.”

After the surgery, Fox spent several weeks recovering in The Johns Hopkins Hospital’s acute inpatient unit, for which he also has high praise. “I’m grateful for and impressed by the doctors, the therapists and the staff. I [could] feel them wanting a positive outcome so badly for me.”

The actor seemed on his way to full recovery when, four months later, he had an unrelated but devastating fall in his New York apartment that shattered his left arm.

Until then, Fox writes in No Time Like the Future, he had considered his optimism unconquerable. However, the fall that broke his arm — requiring a steel plate and 19 screws to repair — also seemed to shatter his enduring faith in the power of optimism.

It returned, he writes, with the realization that despite his medical travails and the inexorable progression of Parkinson’s disease, his life includes many blessings: his devoted wife of now 32 years, actor Tracy Pollan; his exceptional four adult children; his ability to walk and express his feelings; his friends and his incomparable dog, Gus. “With gratitude, optimism becomes sustainable,” he concludes.

On the telephone, Fox adds, “I needed to look for those things I was grateful for — like Dr. Theodore, like the team at Johns Hopkins, right?”

Theodore is surprised that his famous patient chose to publicize the story of his operation so dramatically.

“While Michael has been vocal about his Parkinson’s disease, I did not think he wanted to share everything,” Theodore says. “He is an amazing individual. His sharing gives people hope.”

All the wonderful things I can say about Johns Hopkins — and I’ll say them — start with Dr. Theodore. Everybody on his team, from the tip of the spear down, was just fantastic. I felt like I was in the best place in the world to be.”

Part of the Department of Neurosurgery, Johns Hopkins' spine center specializes in complex procedures like the one performed on actor Michael J. Fox. The Johns Hopkins Hospital is ranked #1 for Neurology & Neurosurgery by U.S. News & World Report. Learn more about our care and connect with our team of experts. Request an appointment.

Over the past 20 years, the Michael J. Fox Foundation for Parkinson’s Research has raised and donated $1 billion to fight Parkinson’s disease — more than any charity in the world.

For example, Fox Foundation funds have supported research by Johns Hopkins, the University of Rochester in New York and Aston University in the United Kingdom on the use of smartphone apps and wearable devices to help monitor a patient’s Parkinson’s, to direct care decisions and to test new treatments.

Fox believes that his foundation’s association with Parkinson’s researchers at Johns Hopkins will continue. “It stands to reason that we would have a deep and entrenched relationship with Johns Hopkins because of its research enterprise,” he says. 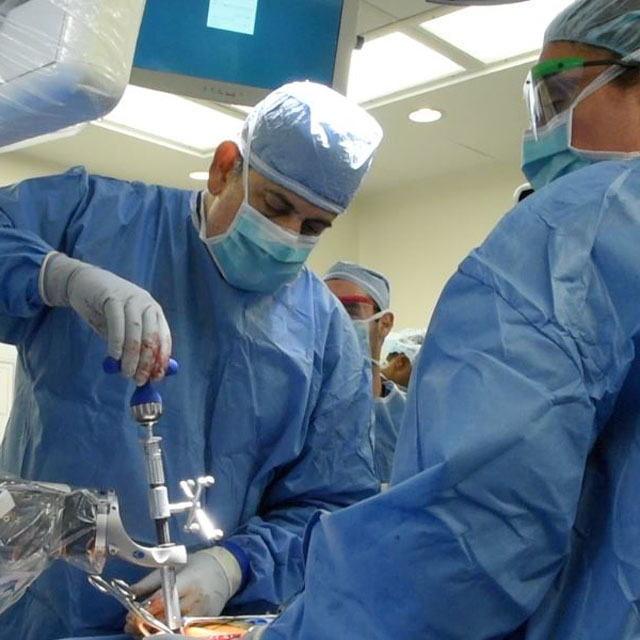 An Innovation in Robotic Spine Surgery 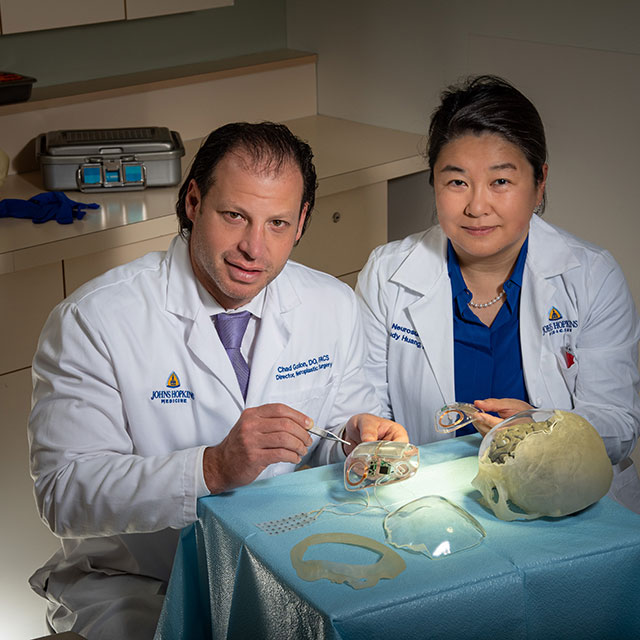 Meet the Neurosurgeon Behind a Safer Super Bowl

Johns Hopkins neurosurgeon Nicholas Theodore heads the committee advising the NFL on health and safety initiatives.
back to top button