Although he’s an adult endocrinologist, volunteering at an overnight summer camp for children living with type 1 diabetes has made Mihail Zilbermint, M.D., a better doctor. He sees the campers’ struggles, learns about how they manage their condition and observes in real time the effects of low or high blood sugar.

“I just really enjoy working with the kids,” says Zilbermint, chief of endocrinology, diabetes and metabolism at Suburban Hospital. “They’re vulnerable because they live with a chronic condition requiring multiple insulin injections per day. But they’re also extremely mature. They have a deep understanding of chronic disease.”

Zilbermint, who is also the chair of Suburban Hospital’s Department of Medicine, has volunteered at Camp Possibilities — held this year at Elks Camp Barrett in Annapolis — since 2013, when he was an endocrinology fellow at the National Institutes of Health. In a typical year, about 100 campers ages 8–17 attend. Approximately 75 children attended this year in three sessions split by age groups to allow COVID-19 precautions to be followed.

Zilbermint is not just a member of the camp’s medical staff. He takes part in the fun as well, joining water balloon fights and helping campers make up songs while he strums his acoustic guitar.

About 210,000 Americans under age 20 have diabetes, according to the Centers for Disease Control and Prevention. Of them, 187,000 are diagnosed with type 1 diabetes. Management involves daily insulin injections, healthy lifestyles habits and monitoring of blood sugar (see sidebar).

Across Johns Hopkins Medicine, faculty and staff members volunteer at summer camps throughout the region, providing much needed medical care for kids with chronic conditions. In Baltimore, pediatric endocrinologist Risa Wolf, M.D., founded Camp Charm City Diabetes, a five-day program hosted on the campus of The Johns Hopkins University and funded by the Johns Hopkins Division of Pediatric Endocrinology and Diabetes along with the American Diabetes Association.

Donald Small, M.D., Ph.D., director of the Division of Pediatric Oncology at the Johns Hopkins Sidney Kimmel Comprehensive Cancer Center, has volunteered at Camp Sunrise since its founding in 1986. The overnight camp for children who have cancer is usually held for one week in August at the same Annapolis property that hosts Camp Possibilities. The program was held virtually this and last summer, but previous years included swimming, sports, hiking and eating s’mores around the campfire for more than 100 campers ages 4–18.

Like Zilbermint, Small relishes the opportunity to see kids just being kids, and it reminds him to encourage his pediatric patients with cancer to take part in the things they enjoy.

“We get more of out of this than we give,” he says of the camp volunteers. “The kids are great. They don’t feel sorry for themselves. Whatever they’re going through, they go there and they have just an absolutely wonderful time.”

Johns Hopkins physicians, physician assistants, nurses and nurse practitioners volunteer at the camp for 12-hour and 24-hour shifts. The work can include giving campers chemotherapy; dealing with bee stings, scrapes and bruises; and helping campers get transported to the hospital if necessary.

For about 10 years, the Kimmel Center maintained and sponsored Camp Sunrise. The camp is now a 501(c)(3) organization with its own director and board, but Johns Hopkins staff members continue to volunteer.

For both Zilbermint and Small, the camps are like family reunions — many of the children go on to become camp counselors. This year, Zilbermint worked with counselors in training, some of whom may become his future colleagues.

“We’re teaching them to be role models and to be understanding toward the other kids in the camp,” he says. “As the med staff, we’re role models for campers as well. Some of them even want to become doctors, nurses or physician assistants, which is terrific.”

“I just really enjoy working with the kids. They’re vulnerable because they live with a chronic condition, but they’re also extremely mature. They have a deep understanding of chronic disease.”

Type 1 diabetes, in which the body doesn’t make enough insulin, is more common in youth than type 2 diabetes — for people with this disease, the body doesn’t use insulin effectively. Type 2 diabetes is becoming more common in children, and many public health experts blame this on rising rates of childhood obesity. About 26.9 million Americans are diagnosed with diabetes.

While type 1 diabetes cannot be prevented, it can be managed with daily insulin injections, lifestyle changes in areas such as diet and exercise, and frequent monitoring of blood glucose levels. The risk of developing type 2 diabetes can be lowered by maintaining a healthy weight, performing regular physical activity and eating a healthy diet.

Click here for more information about diabetes in children.

The Magic of Volunteering

With Suburban Hospital doubling in size due to the opening of a clinical addition this winter, volunteers continue to play a vital role in supporting care. 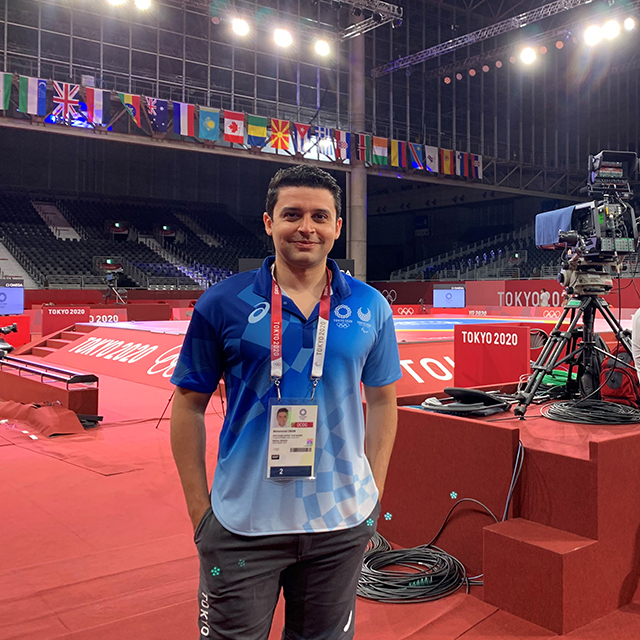 Johns Hopkins sports medicine specialist Mo Emam talked with Dome from Japan following his stint as a physician volunteer at the 2021 Olympic Games.
back to top button