When Susana Rodriguez began her undergraduate studies, science wasn’t on her list of career options. She was having a hard time choosing a major field—nothing seemed to fit. Many college students face the same dilemma, and for those who are minorities, there are few role models with similar ethnic backgrounds in careers within different academic disciplines.

One of Rodriguez’s professors led a program called Minority Biomedical Research Support to encourage minorities to pursue careers in science. “We talked about health disparities in minorities, and that really hit a nerve,” she says.

Soon after Rodriguez was accepted into the program, she quit her side job as a bank teller. It wasn’t long before Rodriguez was presenting at local and national conferences her undergraduate research project on how reproductive cells die.

“Presenting my research was empowering, and it kept me motivated to move forward in this field,” says Rodriguez, who graduated from California State University, Dominguez Hills with a bachelor’s degree in chemistry and a minor in biochemistry.

Now, in her fifth year of postdoctoral studies in the Department of Physiology at the Johns Hopkins University School of Medicine, Rodriguez is leading an annual effort that began three years ago to celebrate and showcase research led by underrepresented minority biomedical trainees, including postdocs, clinical fellows, graduate students, undergraduates and high school students, in the Baltimore area.

In three years, the conference’s committee doubled the number of poster presentation submissions. The committee also selected students in high school through postgraduate education to give presentations on their work at the conference, based on the strength of the abstract they submitted for their research.

One of those students was Cory White, who is in the Biochemistry, Cellular and Molecular Biology Graduate Program at Johns Hopkins. “I enjoy the curiosity factor of science and discovering something that no one else has studied before,” says White.

White says he has seen diversity initiatives among trainees grow since he first arrived five years ago. When he decided to attend the Johns Hopkins program, he was looking for a good balance between the best science and wide professional networks. He found that DPAC and the Biomedical Scholar’s Association for graduate students offered opportunities to network with postdocs, graduate students and faculty from different academic departments and personal backgrounds. White says he found these networks useful when applying for awards in scientific achievement and to get mentorship from individuals in the next stage of their careers.

White is currently using genetic tools to study how the brain uses fats for energy, and he’s thinking about options for postdoctoral positions. Still, he says, he’s not sure if he wants to stay in academia long-term and is interested in technology ventures.

Also on the roster of lectures during the conference, neurosurgeon Alexander Perdomo-Pantoja, M.D., is in his third of five years as a postdoctoral fellow at Johns Hopkins. He completed his neurosurgery residency at the National Institute of Neurology and Neurosurgery in Mexico City before joining the Johns Hopkins Spinal Fusion Laboratory.

Perdomo-Pantoja is studying a variety of topics in neurosurgery, including spinal fusion. Previously, he found that tissue and blood samples of people with brain tumors called astrocytomas may contain genetic clues that could identify people who are predisposed to poor survival from the tumors. Testing these tumors for those genetic clues could alter treatment strategies for patients.

“I fell in love with Johns Hopkins,” says Perdomo-Pantoja. “This is the mecca of neurological surgery.”

For Rodriguez, the Biochemistry, Cellular and Molecular Biology Graduate Program offered the opportunity to interact with people in many research programs, but she found fewer underrepresented minorities like her among the graduate students compared with medical students.

“Not only were there fewer of us among graduate students, but there were few organizations in place when I started my doctoral studies that catered to the unique challenges and experiences of underrepresented minority graduate students,” she says. “Graduate students didn’t fit into medical-focused programs, and the Biomedical Scholars Association was just forming as a response to fulfill this need for doctoral students.”

“As a postdoc, you become a bit isolated compared with graduate students,” she says. “Hosting and organizing programs, such as the Excellence in Diversity symposium and other program on mentoring, made me feel less isolated and more connected to the larger Hopkins community.”

DPAC’s Excellence in Diversity symposium is held every year in Turner Auditorium. All faculty, students, trainees and staff members from universities in Maryland and surrounding areas are invited to attend. A call for abstracts is distributed in the fall.

Presenting my research was empowering, and it kept me motivated to move forward in this field.

“I enjoy the curiosity factor of science and discovering something that no one else has studied before.&quot;
--Cory White 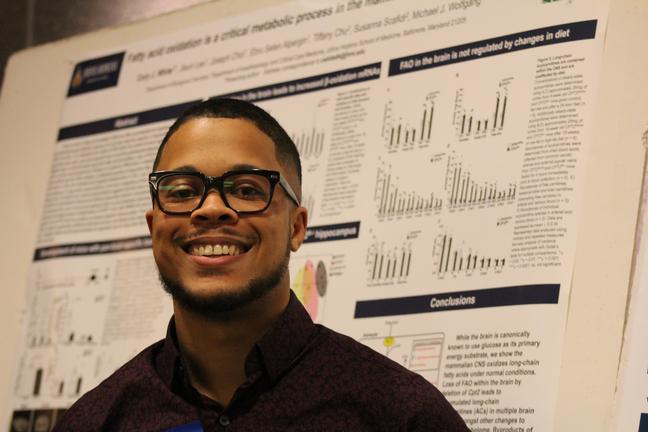 Cynthia Eleanya, M.D., a third-year resident at Johns Hopkins Bayview Medical Center, presented her research on identifying patients at high risk for readmission after discharge from the hospital. 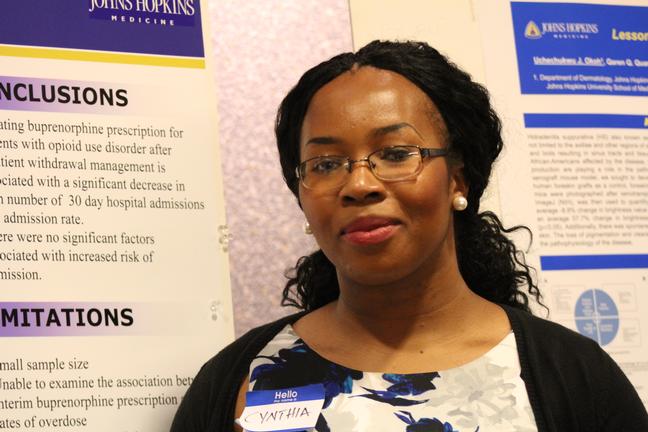 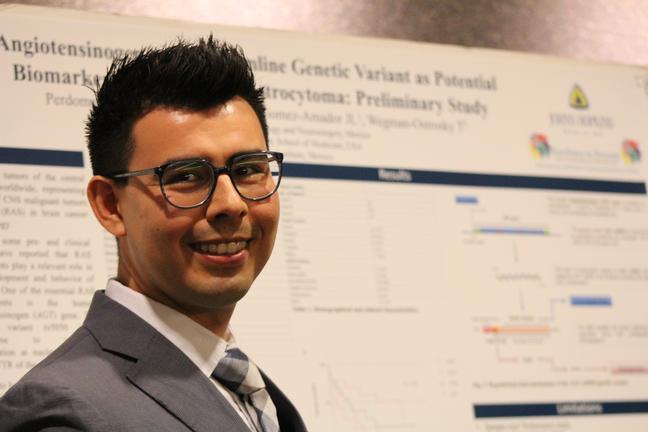 Alexander Perdomo-Pantoja
back to top button