April Lugo watched in horror as her great-grandmother tripped on the sidewalk recently, breaking bones in her face and spine.

She scooped up her beloved relative and sped her to a nearby emergency room. With no interpreters available, she became the linguistic bridge between the injured woman and the harried clinicians in the Pennsylvania hospital.

“My Spanish is conversational, not medical,” says Lugo, whose family is from Puerto Rico. “I didn’t know the word for MRI in Spanish, and probably terrified my great-grandmother by trying to explain it as a huge loud machine that they stuff you inside so they can see your brain.”

Lugo was the first in her family to go to college. After graduating from The Johns Hopkins University, she took a job as a program specialist in the Johns Hopkins Medicine Office of Diversity, Inclusion and Health Equity.

She also became co-chair of Hopkins Familia, an employee resource group (ERG) for her Hispanic and Latinx colleagues and their allies in Johns Hopkins Medicine.

“Growing up, I saw the inequities that my family, and other families like my own, faced,” says Lugo. “Having the power to make a difference for our Hispanic/Latinx communities is so rewarding.”

Hopkins Familia, co-chaired by Wilson Lamy, senior quality and innovation coach for the Armstrong Institute for Patient Safety and Quality, launched in February 2018. Its focus, says Lamy, is “increasing awareness of Hispanic/Latinx challenges related to workforce, patient care and community, while promoting our heritage and culture.”

Membership has grown from 60 to 470 members, representing about 25% of the JHM Hispanic population, who work in all levels of the health system and represent dozens of nationalities.

The group organizes networking events, mentoring programs and lectures for employees; hosts “patient cafes” with informal conversations between clinicians and patients; and sponsors career days and summer internships for nearby residents. Since the start of the COVID-19 pandemic, most events have shifted to virtual formats.

The group’s executive sponsors are Inez Stewart, senior vice president for human resources, and Pablo Celnik, director of the Department of Physical Medicine and Rehabilitation.

About 2,000 employees of Johns Hopkins Medicine, roughly 4%, are Hispanic (Spanish-speaking culture or origin) or Latinx (Latin American culture or origin). The workforce of Johns Hopkins Bayview Medical Center is less than 2% Hispanic or Latinx, a contrast with the surrounding Baltimore community of Highlandtown, which is about 22% Hispanic/Latinx, according to City-Data.com.

As a medical interpreter at Johns Hopkins Bayview, Eduardo Ribeiro works with patients and families from just about every Spanish-speaking country on the planet.

“In Highlandtown, you’re going to see Incans, Mayans and Aztecs walking down the street,” says Ribeiro, who grew up in Colombia and has a doctorate in linguistics. “Every day I see at least two patients who speak an indigenous language. I talk with them in Spanish, but I’m always aware that that’s their second language.”

Through Hopkins Familia, he gives talks to his Johns Hopkins colleagues about the patients they might see.

“My talks have been about the backgrounds of people who come to this part of the U.S., in order to make sure the Johns Hopkins community is aware that a Spanish-speaking patient can come from all walks of life,” he says.

Familia member Donna Batkis, senior psychotherapist for the Hispanic psychiatry clinic, hears some of the challenges faced by her Spanish-speaking patients. “As a mental health provider, people tell me things from their hearts,” she says.

Some patients came to the U.S. to flee civil war or other violence, and may have post-traumatic stress disorder. If they are undocumented, they may be wary of seeking care for fear of legal repercussions, including deportation. Many are unfamiliar with the complicated U.S. health care system and may be uncomfortable seeking preventive care, which is not common in some cultures.

COVID-19 adds new burdens. In Maryland, Hispanic and Latinx residents account for 10% of the population and 20% of COVID-19 hospitalizations, according to the COVID Tracking Project.

The pandemic is also making language barriers more pronounced for people with limited English proficiency because patients and caregivers are wearing masks, and because family members who might otherwise serve as informal translators are restricted from visiting.

During the informal gatherings, Hispanic patients and their family members can ask questions and offer suggestions about their care. Batkis is planning to hold future cafes online.

“A lot of the kids from Patterson High School have immigrant parents; I relate to that being an immigrant myself,” says Marchena, who grew up on the Caribbean island of Aruba.

This year, the October event took place over Zoom, with about 35 students and 20 volunteers, including Marchena, who discussed their own careers.

“They want to know what college is like, what they have to do to become an accountant or start a business,” he says. “One thing I emphasize with kids is that if something doesn’t work out as you originally planned, it’s not the end of the world. Always keep moving, pushing forward, that’s important.”

In non-COVID-19 years, he runs a booth for Johns Hopkins job seekers at the Hopkins Bayview Fun-n-Fit Day, sponsored by the medical center’s Department of Pediatrics every September. “We talk to people, find their interests and try to facilitate their application process,” he says.

“We can have the workforce represent the community better, in order to provide better care for our patients.”

To learn more, contact April Lugo at alugo@jhu.edu or Wilson Lamy at wilsonlamy@jhmi.edu. 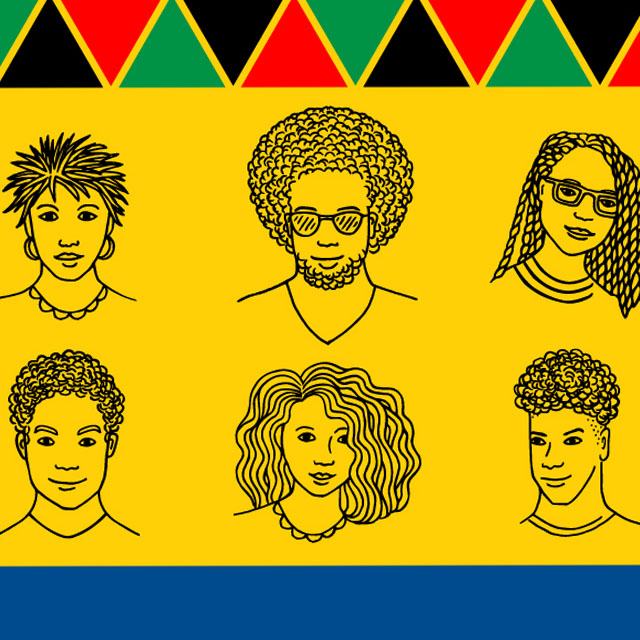 The Johns Hopkins Diaspora: Where Diversity and Inclusion Thrive

In its first year, the employee resource group has promoted racial justice and inspired change.