Published in One Wilmer Spring 2020

Because researchers have a finite amount of time and attention, to truly leverage both the depth and breadth of today’s scientific advances, they need to band together to tackle problems. Yet, the primary model for medical research is still the single research group, led by a faculty member known as a principal investigator (PI), who receives a grant from the National Institutes of Health (NIH) to fund his or her lab. The researcher then has discretion as to how much or how little he or she collaborates with others.

The NIH isn’t the only game in town, however. Recently, Wilmer ophthalmologist Don Zack, M.D., Ph.D., received generous grants from the Gilbert Family Foundation (GFF) — established and run by Quicken Loans founder Dan Gilbert and his wife Jennifer — that aim to create a different model. “The grants were given as groups to fund research teams at different institutions to work together. They’re not separate grants to each lab,” says Zack. “It’s all part of a larger project structurally designed to be a collaboration.”

Part of the structures mandated by the GFF include monthly phone calls and an annual in-person meeting as well as sharing materials such as reagents, cells and animal models; a coordinator provided by the foundation makes sure these processes run smoothly.

The grants, which total $11 million, fund a “Dream Team” (as the foundation refers to it) whose goal is to preserve and restore vision to individuals suffering from vision loss caused by optic nerve tumors in patients with neurofibromatosis 1 (NF1) — a condition in which tumors can grow within the nervous system and in the skin.

The Dream Team includes 12 experts from the fields of NF1, ophthalmology and neuroscience. The researchers want to “figure out how NF1- associated tumors injure the optic nerve, find ways to reduce the injury, and develop technology to regenerate the optic nerve and restore vision,” says Zack. Their work will likely have implications for other optic nerve diseases such as glaucoma as well.

The initiative is focused on specialized neurons called retinal ganglion cells (RGCs), the cells in the retina that combine to form the optic nerve and transmit visual information from the eye to the brain. An example of how the collaboration works between the researchers involves how these cells are created.

“Another lab generated cells that have the NF1 mutation, either from a patient or using CRISPR- Cas9 editing,” says Zack. “They sent the cells to us, not as RGCs, but as stem cells. We are making those stem cells into retinal ganglion cells.” His lab will study the RGCs with the NF1 mutation and he will send them to other collaborators who will do the same.

Zack is optimistic that this could be a more productive structure for research projects because of its size and the amount of funding. “This is a very directed collaboration. The goal is to help patients with NF1 see again. They picked the groups who they think can work together to achieve this goal,” says Zack. 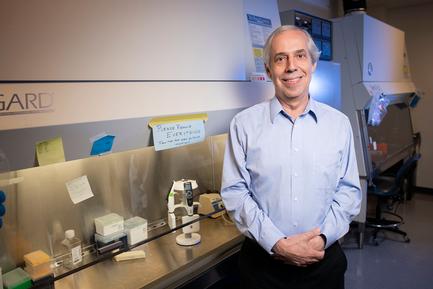 Don Zack
back to top button