Brian’s days were busy as he and his wife enjoyed their active two-year-old son. Despite a family history of prostate cancer, when the 47-year-old began feeling “a little off,” he didn’t initially think much of it. As his symptoms worsened, however, he decided to make an appointment with an urologist.

The urologist performed a prostate exam and a prostate specific antigen (PSA), a blood test that screens for prostate cancer. The results of both tests pointed to cancer. The exam revealed an enlarged prostate, and his PSA test results were high. A friend recommended he go to Johns Hopkins to have it checked out.

His appointment with the Prostate Cancer Multidisciplinary Clinic involved all of the specialists involved in treating prostate cancer, including radiation oncologist Phuoc Tran.

By the time Brian’s cancer was diagnosed in 2016, it had already spread, a distinction known as a metastatic cancer that often limits the kind of treatments a patient is eligible to receive. It also often represents a dividing line between a curable cancer and one that is not curable. However, Tran is beginning to shift that paradigm through a new Cancer Invasion and Metastasis Program he leads with Kimmel Cancer Center colleague and cell biologist Andrew Ewald and Bloomberg Distinguished Professor Ashani Weeraratna.

Their research shows that just as there are varying stages and grades of cancer, there are also varying degrees of metastasis. A cancer that has just begun to spread from the primary tumor to a few sites is very different from a cancer that has spread to many distant sites throughout the body, yet treatment is often similar, Tran explains. Popular opinion was that once a cancer had spread, there was no going back. Attempts to cure the cancer were obviated for palliative treatments that knocked the cancer back a bit and ameliorated pain and other side effects associated with the spread of the cancer.

Tran and colleagues, including prostate cancer researcher Kenneth Pienta, however, were starting to see evidence that there was connectivity between primary tumors and cancer cells that broke away and formed new tumors elsewhere in the body. They believed that selectively treating these tumors with radiation and other treatments had the potential to make cancers once thought incurable, curable.

This was the approach taken with Brian. 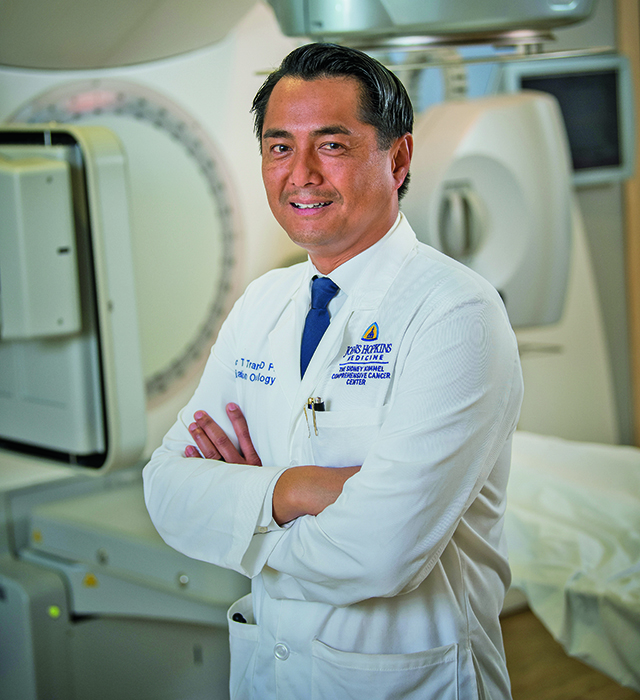 Tran uses the analogy of the first American colonists. Although, they set up communities in distant locations, they often relied upon and received support, guidance and instruction from Great Britain, says Tran. Similarly, he believes—and research is beginning to bear this out—that spreading cancers remain molecularly connected to the primary tumor site, where the cancer originated.

“Most experts forget about the primary prostate tumor once a cancer has spread,” says Tran. “We’ve learned from data generated by the Johns Hopkins Rapid Autopsy Program that some metastatic cells go back to the prostate and travel all over, communicating with other cancer cells and colonizing. Information is exchanged, and it strengthens the cancer as a whole,” he says.

This connectivity and how the primary tumor communicates with colonizing metastatic tumors are not yet fully understood. Although cancer metastasis is the leading cause of cancer death—accounting for 90%--little research is aimed at figuring out how to thwart it. Deciphering how cancer spreads and how to interfere with the process is the mission of the Cancer Invasion and Metastasis Program.

Cancer cells are the ultimate survivalists, exploiting all the tools of normal cellular and molecular biology to their advantage. There is some data that show that primary tumors send out signals to lay the groundwork for the future spread of the cancer. Later, cells go to predetermined locations and form new tumors. Other tumors remain dormant, sometimes for decades, and then begin growing again.

Tran believes cutting off the metastatic or spreading cancer cells from the primary tumor makes it more difficult for a cancer to survive. Some prostate clinical trials are beginning to prove his hypothesis to be true, showing that treating the primary tumor extends life. Still, many times the cancer often comes back, he says.

Tran’s vision is to take the battle to the next step, treating both the primary tumor and metastatic sites.

This is the plan Tran, Pienta and surgeon Mohamad Allaf developed for Brian, combining chemotherapy, a testosterone-blocking drug, surgery and radiation to get at the primary tumor and the spreading cancer cells.

Typically, surgery is not an option for prostate cancer that has already spread. Instead, doctors usually opt to cut off the testosterone feeding the cancer, a treatment that can quiet the cancer down but also it can have unfavorable side effects for patients, and it does not cure the cancer.

Tran says as they shift the treatment paradigm for metastatic cancers, they need safe and precise ways to get at spreading tumors, and he believes proton therapy could be the way.

Treatments such as immunotherapies that engage and improve the ability of the immune system to attack cancer are having success against metastatic cancers and may be part of combined treatments. “We think that protons are less immunosuppressive, so we want to study how they interact with immunotherapy,” says Tran.

He and Marikki Laiho, director of molecular radiation sciences, have already begun preparing for these kinds of proton therapy laboratory studies.

“We don’t really know a lot about protons. This is our mandate. How proton therapy interacts with other therapies we already give, including immunotherapy, represents a whole untapped area of research,” says Tran. “Combining proton therapy with other treatments is a completely novel and promising strategy to change proton therapy into a systemic treatment against more advanced, spreading cancers.”

It is called the abscopal effect, Tran explains. The thought behind it is that treating the primary tumor and some metastatic lesions can cause even untreated tumors to shrink. It goes back to Tran’s concept that the primary and spreading cancer cells are interconnected, and damaging one link in this chain is enough to weaken the entire cancer.

“The sum is greater than the individual parts,” says Tran. “Cut off the metastatic sites from the primary tumor, and it becomes more difficult for the cancer to survive.”

The treatment appears to be working for Brian, who four years later remains cancer free, with no signs of recurrence and a PSA of zero. He does his part to keep the cancer in check, keeping active, eating well and keeping a positive outlook.

“One of the smartest things I did was come to the Johns Hopkins Kimmel Cancer Center,” says Brian, who got a second opinion at Tran’s encouragement. He went to another major comprehensive cancer center and was advised to stick with Tran’s plan. The doctor he saw noted that no other place was offering these kinds of treatments for advanced prostate cancer.

“The most important advice I give to other people is to make sure to talk to the best,” says Brian. “Find the people who care about the issue you have and are on the cutting edge. I met people around the world when I was receiving radiation therapy at the Kimmel Cancer Center. They told me that everyone around the world knows Johns Hopkins.”

Tran says many patients he sees for the first time, come believing there is nothing that can be done for them. In their most difficult moment, Tran’s innovative new treatment approach gives hope.

“My life is great,” says Brian. “I have two kids now, and my wife and I are enjoying every moment.”

The merging of two discoveries provides a novel way to deliver cell destruction to prostate cancer. At the center of the research are two things familiar only to scientists—aptamers and siRNA.
back to top button