While making house calls was common medical practice when John Burton was growing up in the 1940s, he and his colleagues were met with skepticism when they proposed bringing them back 30 years later.

“Oh, everybody thought we were nuts. They said, ‘What are you doing? House calls? That’s old-fashioned. You can’t do anything in the home at all. You don’t have your gizmos, you don’t have your equipment,’” says Burton, a geriatrician and professor at the Johns Hopkins University School of Medicine. “I said, ‘Well, it’s the right thing to do.’”

He launched the elder house call program in 1976, which grew from 10 to 90 patients in one year and continued to grow in the years that followed. Initially supported by a grant from Miriam Andrus, a grateful patient of Burton’s, the program was renamed Johns Hopkins Home-Based Medicine (JHOME) in 2016.

While Burton is no longer involved in the program, JHOME’s medical director, Mattan Schuchman, along with JHOME nurse practitioners, see patients who are homebound or otherwise have difficulty visiting a doctor’s office for routine medical appointments. Patients must be at least 65 years old and have two or more chronic conditions — the most common are dementia, diabetes, chronic obstructive pulmonary disease (COPD) and congestive heart failure.

The idea came out of another program that Burton, now 82, and colleagues started: an off-campus primary care center to better serve the community and to teach doctors-in-training medicine outside of the hospital setting. Burton was a nephrologist — he served in the Philippines during the Vietnam War, performing dialysis and working on kidney diseases — but his calling was getting to know patients as people, not focusing on one area of medicine.

As the clinic saw patients, Burton and his colleagues noticed a common occurrence that was troubling. A few times each month, an ambulance would bring in a patient who had been homebound for an extended period of time and had no access to health care.

“The family had to take the whole day off. We said, ‘This is crazy. This is a lose-lose situation,’” Burton says. “‘Why don’t we just see you at home?’ So that’s how house calls started.”

Burton found house calls particularly vital for patients living alone. He recalls an elderly woman who had visited the emergency department nearly 100 times in one year for issues ranging from a sore thumb to a fall. When the house calls program took her on as a patient, she only visited the emergency department once the following year, and she did not go at all the year after.

“In my view, you cannot take care of vulnerable people, particularly the older population, without some way to provide care at home,” Burton says.

The program partnered with nurses a few years after launching, and the doctors and nurses would meet weekly to discuss some of their complex patients. Similar meetings continue to this day, with Johns Hopkins doctors, nurses and other clinicians discussing their home-care patients’ needs.

“In my 50 years of medicine, we’ve gone from taking care of people with acute disease who died at 50 to now taking care of people who are 85 with 12 different chronic problems,” Burton says. “So you have to have a system that deals with that effectively, and to me, having a major house call program as part of your system is critical.”

Burton is the former director of both the Division of Geriatric Medicine and Gerontology, which honored him by renaming the Johns Hopkins Care Center as the John R. Burton Pavilion, and the Johns Hopkins Geriatric Education Center. Some major programs that were started or developed under his leadership include Hospital at Home, Program of All-Inclusive Care for the Elderly and the Orthopedic-Geriatric Medicine Hip Fracture Service. While Burton stopped seeing patients in June 2018, he still does teaching rounds — partly at the bedside — with medical students and residents at Johns Hopkins Bayview Medical Center every Wednesday afternoon.

Reflecting on his JHOME legacy, Burton says house calls put patients at the center of decision-making by virtue of being in their homes, and cast doctors more as advisers or counselors who make decisions in conjunction with their patients.

“Connecting some of the modern technology to the old-fashioned stuff is a challenge, but it’s happening,” Burton says. “I think house calls are back and here to stay.”
Request an appointment
Johns Hopkins' medical concierge services offer complimentary assistance with appointments and travel planning. Request free assistance:
All fields required *
Related Reading 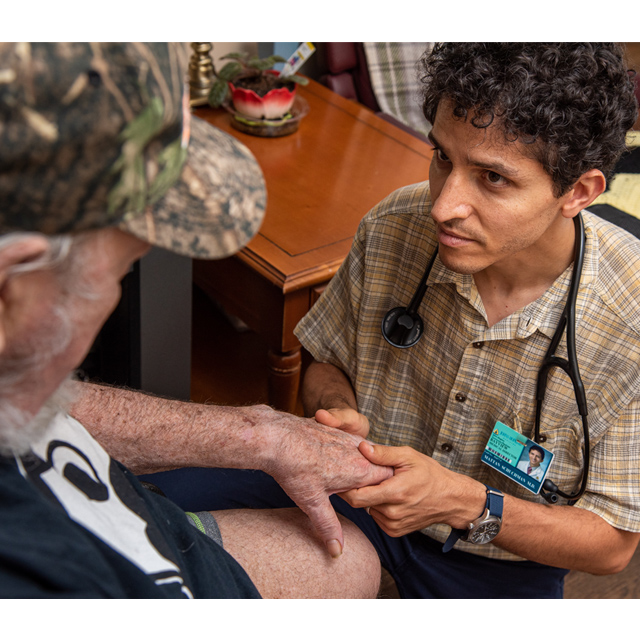 Johns Hopkins clinicians deliver primary care at home for patients age 65 and older who struggle with chronic conditions such as heart failure and dementia.
back to top button