Pediatric neurologist Sarah Kelley recalls the complex case of a child diagnosed with epilepsy, and the cause of his seizures was not known. What started out as periodic shaking of his right leg evolved into violent, minute long episodes – up to 60 each day – on his entire right side. The good news was the patient’s epilepsy could be treated surgically, but only if the lesion in his brain triggering the seizures could be located. Conventional MRI had revealed the culprit and a higher-resolution MRI scan confirmed its precise location at the bottom of a deep fold in the cortex of the brain. The lesion, however, was a few millimeters away from the area in the brain responsible for motor movement, posing a serious surgical risk for the patient. Intracranial monitoring in the epilepsy monitoring unit (EMU) helped reduce that risk, and subcortical motor brain mapping was used to ensure vulnerable areas were not injured. Immediately after surgery, the patient was able to speak, and 24 hours later, he gave his family a high-five with his right arm. Two weeks later, he was walking.

Kelley cites the case as an illustration of the human and technological resources that Johns Hopkins pediatric neurologists/epileptologists, neuroradiologists and neurosurgeons, among others, can bring to bear in diagnosing and treating young patients suffering from seizures. However, she adds, one fly in the ointment was that the one EMU at The Johns Hopkins Hospital served all age groups. That meant children went through seizure monitoring, in some cases for up to a week, with adults in neighboring beds and not all pediatric services readily available. This all changed Jan. 6, when a new EMU for pediatric patients only opened in the Charlotte R. Bloomberg Children’s Center building.

“We now have an epilepsy monitoring unit staffed 24/7 with pediatric-trained neurologists, neurosurgeons and nurses, epilepsy specialists and technicians,” says Kelley, director of the new unit.

Designed for children, Kelley adds, the pediatric EMU is a four-bed unit with state-of-the-art technology, including high-definition cameras and wireless monitoring in two of the rooms, allowing patients to walk freely. Other services provided by Johns Hopkins Children’s Center, such as pediatric respiratory therapy, pediatric home care and child life services, are available to patients and their families.

“Having this specialized pediatric care is extremely important and will drive quality for our patients,” says Kelley. “Our youngest patients will now have easy access to all the resources of a children’s hospital. We’ll be able to build capacity and bring more children in more quickly for the care they need.”

During the unit’s grand opening, Redonda Miller, president of The Johns Hopkins Hospital, noted Johns Hopkins’ long and storied history of treating epilepsy through diet, medications and surgery. “I think back to the ketogenic diet and how it had its roots here, and hemispherectomies as a curative treatment for some of our youngest patients,” said Miller. “So it’s only fitting that we continue that tradition of excellence by opening these beds for children suffering with seizures.”

“We’ve always had amazing epilepsy treatment here,” added pediatric neurosurgeon Shenandoah Robinson. “Now, with all the pediatric services we have here, it’s extremely gratifying to be on the front lines and to be able to offer this to our families.”

The goal of epilepsy monitoring is to determine if the child is having seizures and, if so, their frequency and location. Patients undergo electroencephalography (EEG), with electrodes placed on the scalp, to record the brain’s electrical activity. In some cases, it’s already known that the patient has seizures and the EEG is performed to allow doctors to change the patient’s medicine in a safe environment. Other times, the patient has failed a pharmacological treatment and the EEG results are used to determine if the patient is a candidate for surgery.

In some cases, intracranial monitoring – in which electrodes are placed in or on the brain in the operating room – is used to further localize the area of seizure onset. Both adult and pediatric EMU staff review all complex cases during their weekly epilepsy conference.

“That’s where we get 15 epileptologists in adult medicine and pediatrics together to think about the details of each case to determine by consensus the best course of action for each patient,” says Kelley. 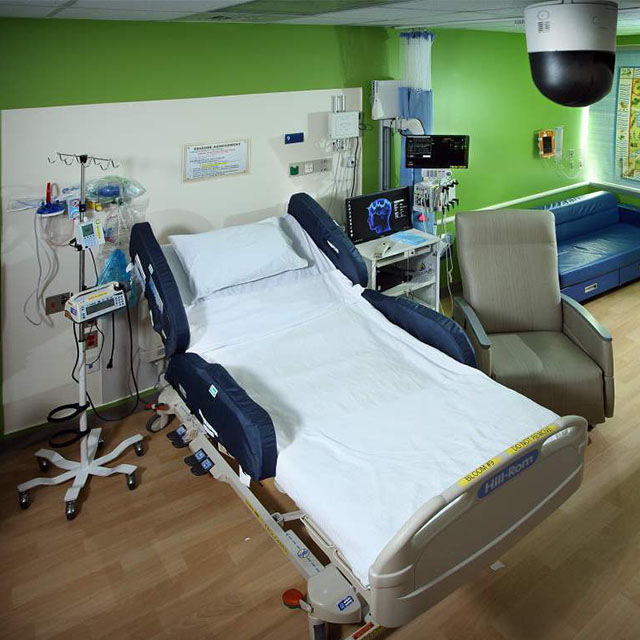