When Tim and Gretchen Reilly’s son, Matthew, was diagnosed with spinal muscular atrophy (SMA) type 2 a decade ago, the family spent the next year adjusting to a new normal. Then, they turned to action.

Because this genetic neuromuscular disease is relatively rare—affecting just one in every 6,000 to 10,000—and is fatal in its most common and severe form known as type 1 within the first two years of life, relatively few research dollars are devoted to developing treatments for children like Matthew, now 11, who will live with severe and progressive muscle weakness. Very informally, the family began fundraising for the largest SMA research organizations. But eventually, Tim says, they wanted to do something “a little different.”

Thinking Outside the Box

As a scientist who currently leads immuno-oncology early drug development for a large pharmaceutical company, he’s seen firsthand how most biomedical research gets funded: Whether at governmental funding organizations like the National Institutes of Health or biopharmaceutical companies, most funders want to invest only in research that’s headed in a proven direction and is likely to succeed. But that’s not where many truly groundbreaking advances come from, Reilly explains.

“Harebrained, out of the box ideas have led to some of the most amazing discoveries we have in our culture,” he says.

Finding a way to fund such risky research could dramatically change the research landscape for SMA, Tim and Gretchen reasoned. That’s why the couple, along with friends and family members back in their hometown of Buffalo, New York, started the Spinal Muscular Atrophy Research Team (SMART; www.smarthope.com) in 2009. Their goal was to fund creative scientists doing work related to SMA who had the same mindset and passion to explore ideas outside the mainstream.

They found their match with Charlotte Sumner, a Johns Hopkins neurologist who has made SMA the cornerstone of her laboratory research. For the past five years, SMART, including its foundational supporters like the Buffalo Firefighters Local 282 and Buffalo Sabres organization, has funded Sumner’s investigation with yearly grants between $100,000 and $150,000.

For decades, researchers have known that the disease stems from a defect in a gene known as survival motor neuron 1 (SMN1), which causes motor neurons to ultimately die from a lack of the protein produced by this gene. This deficiency can be partly ameliorated with functional proteins from another gene known as SMN2, which varies in copy number from person to person. Consequently, the type and severity of a patient’s disease correlates to the number of SMN2 copies encoded in their genome and the corresponding amount of protein they produce. However, the SMN2-derived protein doesn’t compensate completely for SMN1.

The vast majority of the field is focused on trying to change SMN2’s assembly so that it better matches the function of SMN1, and drugs for this purpose are being tested in clinical trials. But even then, explains Sumner, patients will still only have as much SMN2 protein as their gene copy number provides.

In work also funded by SMART, Sumner identified a window when motor neurons affected by this disease stop working well but are still alive. This period could represent a critical time to deliver therapies.

Rather than spend hours on lengthy proposals that most funding organizations require, Reilly asks Sumner simply to write up a quick summary and a list of her most out-of-the-box ideas, which they discuss and fine-tune over the phone. This unusual system allows her make the most of her time and mental energy in the lab.

“It’s very unconventional,” says Sumner, “but Tim trusts that this money is going to good use.”

Focusing resources on research, adds Tim, is the best way to accomplish SMART’s goal: to help patients like Matthew to eventually convert SMA to more of a chronic condition that can be managed rather than a life-threatening disease and, someday, to find a cure. 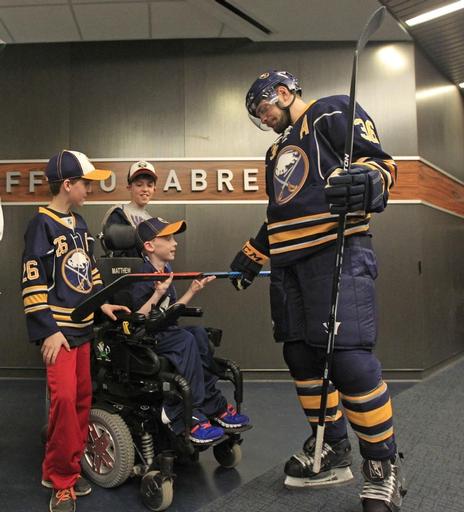 Matthew Reilly receives a hockey stick from a player on the Buffalo Sabers, an organization that is one of the Spinal Muscular Atrophy Research Team’s biggest proponents.
Fighting for SMA Research 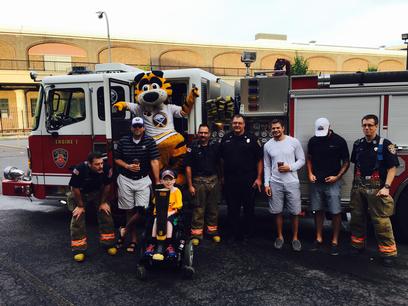 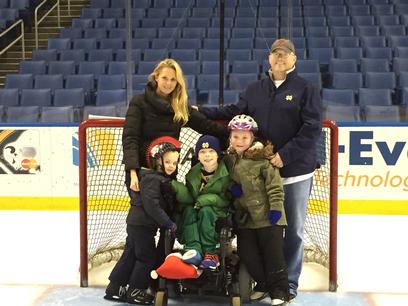