Elizabeth Edsall Kromm cradles one daughter under each arm, holding them easily even though they are getting pudgier and wigglier every day. She’s gotten used to having her hands full. Just weeks after becoming a mother, Edsall Kromm began a second new role, as senior director for population health and community relations at Howard County General Hospital.

The newly created job reports to both Steve Snelgrove, president of Howard County General, and Linda Dunbar, vice president for population health and care management with Johns Hopkins HealthCare. Edsall Kromm’s assignment: Forge partnerships and create a unified health care system that will serve Howard County residents in the community and across treatment settings. “She will have a tremendous leadership impact on population health in Howard County,” says Snelgrove.

Edsall Kromm knows firsthand the power of Johns Hopkins to improve lives. Her enduring connection with the institution began with cancer treatments she received as a toddler and includes her surprising path to parenthood. “I think Hopkins is not only responsible for why I am alive, but also for helping to shape my world view and the type of professional I have become,” she says. “Most recently, Hopkins helped make it possible for me to add the title of mom to my resume.”

In 1981, Edsall Kromm was diagnosed with Wilms tumor, a rare kidney cancer that mostly afflicts children. When surgeons removed her left kidney, they discovered the cancer was so widespread, it was stage 4. Edsall Kromm, now 36, endured two more surgeries and outpatient chemotherapy and radiation that lasted from age 3 until she started first grade.

The treatments eradicated Edsall Kromm’s cancer but impaired her fertility. After she married, Edsall Kromm and her husband turned to Johns Hopkins gyn/ob Lisa Kolp, who guided them through four rounds of intrauterine insemination and four rounds of in vitro fertilization before helping them with surrogacy.

A year ago, as the surrogate was enjoying a healthy, easy pregnancy, Edsall Kromm began feeling rundown and ill. Because of her cancer history, Edsall Kromm’s primary care doctor recommended a nuclear scan but told her to take a home pregnancy test first.

Although Edsall Kromm didn’t think it was necessary, she reluctantly took the home test. Then she took another because she didn’t believe the result. The pink lines told Edsall Kromm she needed to go back to Kolp’s Green Spring Station office, where she and husband Jonathan heard their baby’s heartbeat for the first time.

Kolp, who specializes in fertility preservation for cancer patients, says Edsall Kromm’s ovaries, though damaged, still produced sporadic eggs. “It was possible for her to become pregnant even though exhaustive fertility treatment attempts had not resulted in pregnancy.”

Last November, baby Amelia was born at 27 weeks, only 12 days after the surrogate delivered her full-term sister. Caroline weighed 7.2 pounds, while Amelia weighed just 2 pounds. Amelia arrived early — and bruised — because the radiation that had killed Edsall Kromm’s cancer had damaged her uterus so it couldn’t grow with the pregnancy. Amelia remained in the neonatal intensive care unit at Howard County General for three months, with Edsall Kromm visiting before and after work from her new office in the same building.

In addition to lifesaving medical treatment, Johns Hopkins has given Edsall Kromm education, guidance and friendship: Her pediatrician, Peter Rowe, became ordained as a Universal Life Minister in order to officiate at her wedding. “He has been a huge part of my life,” Edsall Kromm says. “He watched me grow up, helped me stay healthy, and served as an informal mentor and even career counselor.”

Inspired by her oncologist, Brigid Leventhal, the first director of the Pediatric Oncology Division, Edsall Kromm decided before she started kindergarten that she would be a doctor. She stuck to her plan until a college internship at the school of public health motivated her to pursue that field, first as an undergraduate  at the University of Pennsylvania and then in a master’s program at the London School of Economics.

“Being able to help segments of the population instead of one individual at a time was very appealing,” Edsall Kromm says. In 2007, she earned her Ph.D. at the Bloomberg School of Public Health, where she holds an adjunct assistant professorship.

Last month, Howard County General and Johns Hopkins HealthCare won a $200,000 state grant to integrate health resources in Howard County, a major step toward meeting the goal of delivering comprehensive care that is aligned and accountable. Edsall Kromm hopes the data-guided population health model she helps develop will be replicated throughout the state.

“We have a unique opportunity to do good stuff here,” she says. “Hopkins, in many ways, feels like a family member. At various points in my life it has even felt like home. It’s nice to be back.”

“Hopkins, in many ways, feels like a family member.” 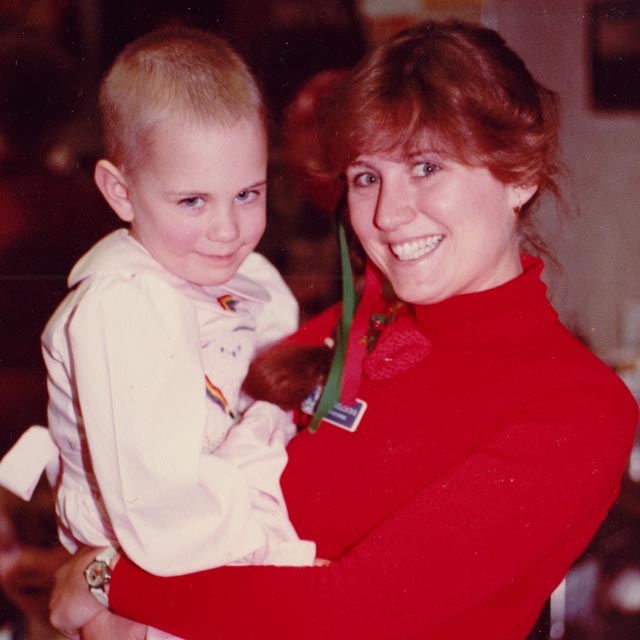 Elizabeth Edsall Kromm now works for Johns Hopkins, but in 1981 she was a patient, shown in the photo at right getting a hug from Colleen Blough, who is still an oncology nurse in the Johns Hopkins Children’s Center.
back to top button