It started in the spring of 2013. Mary Robertson felt a pop in her foot at the gym, which led to worsening pain that never wore off. Two months later, she was sitting with a podiatrist who was recommending surgery.

“He thought he could help me, so I had the surgery that August,” she recalls. “By October, it was clear the surgery had done nothing at all to help my foot.”

Robertson, the wife of a Naval base officer and mother of three boys, had been an athlete her entire life—running, cycling and working out regularly. But after her injury, she could barely even walk. Desperate for relief, Robertson met with two other surgeons—one who told her he couldn’t help, and to just live with it; and the other who agreed to operate, but just before the surgery told her he wasn’t sure it would be a complete success.

“I was devastated. I couldn’t use my foot. The magnitude of the situation was becoming overwhelming and I was very discouraged. And in the meantime, my foot was only getting worse.”

But then came the hope that Robertson has been searching for. In August 2014, a friend recommended Johns Hopkins foot and ankle surgeon Casey Humbyrd, M.D. Says Robertson, “I made an appointment with her, but I was prepared to make this my last effort to find help. If she couldn’t help me, I knew I’d have to face living with this disability.”

At the first appointment, Dr. Humbyrd discussed Robertson’s medical history and reviewed past X-rays and MRI scans. What’s more, Dr. Humbyrd asked her about her lifestyle, family and hopes for her recovery. “Out of the four surgeons I saw, Dr. Humbyrd was the only person that stopped to ask the questions—not only about my pain, but how this was affecting my activity level, my emotions and my life.”

Dr. Humbyrd works with each of her patients to develop an approach specific to their individual needs. “I spend a substantial amount of time talking to my patients and getting a feel for their routines, health, life and family, and what’s important to them,” she says. “I can then speak to what the possibilities are for surgery and what the expectations should be. The goal for me in surgery is always to maximize function.”

Dr. Humbyrd was confident that she could improve the anatomy and function of Roberson’s foot, which had become deformed from trying to walk on it while compensating for severe pain. In fact, the anatomy of her foot had shifted, and a bone had dislocated. With each step that Robertson took, she was actually stepping on free-floating bone.

Putting One Foot in Front of the Other

Dr. Humbyrd came up with several possible procedures that could be done while in the operating room—explaining each to Robertson and her husband. “It’s something I think is the key to a successful surgery,” says Dr. Humbyrd. “Not to just have a plan, but also a back-up plan, and a back-up to the back-up.”

Robertson had her surgery in early September 2014, and by Christmas was able to ski when went she went on a family vacation to Mont Tremblant (Quebec). “I certainly wasn’t skiing any diamond courses, but I was able to ski the easy trails. It felt great. I would ski one or two runs a day. I couldn’t have even attempted that three months earlier.”

It has been a year since Dr. Humbyrd told Robertson she could resume all of her routine activities, which have included doing spin classes and joining a local rowing club. “I feel like I’ve gotten my life back, quite frankly. When you go through something like that and someone can finally help you . . . I’m just so very grateful.”

For more information on foot and ankle surgery or to make an appointment, call 410-550-0453 or visit hopkinsmedicine.org/ortho. 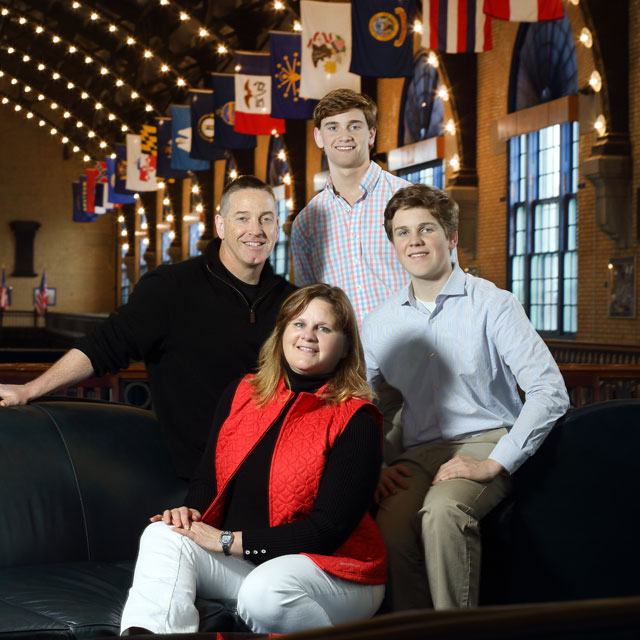 Mary Robertson with (from left to right) husband Tom, and sons Luke, 17, and Evan, 16
back to top button