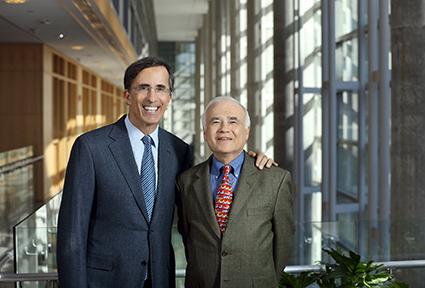 Above, Joshua Rales, l, and Jerry Winkelstein at Johns Hopkins in 2014.

"I was very impressed with Johns Hopkins in general and Jerry in particular,” says Rales, founder and managing partner of RFI Associates, a Maryland-based real estate investment company. “He was clearly a kind human being and devoted to his patients. His wonderful demeanor put you at ease, and he took terrific clinical care of you. So I asked him, ‘How are you going to protect your legacy, this great division you created?’”

Winkelstein was intrigued. He had spent 35 years building the Division of Pediatric Allergy and Immunology at the Johns Hopkins Children’s Center and its fellowship training program. Most of the trainees in the three-year program had gone on to careers in academic medicine, with many becoming leading figures in the field. One of these fellows was Robert Wood, who succeeded Winkelstein as division director and is a world-renowned food allergy and asthma expert.

“When Josh brought up the issue of preserving one’s legacy, I’d never thought about it in terms of fundraising,” says Winkelstein. “But it became apparent to me that one of the biggest threats to our division and its ability to bring about critical advances in the field of allergy and immunology would be the loss of funding for our fellowship training program. Its survival was too dependent on federal funds.”

Since 1980, the National Institutes of Health (NIH) had awarded annual training grants to fund the fellows. While the Johns Hopkins pediatric program has been fortunate enough to maintain its NIH funding, the overall number of grants was already in decline by 2004, as Winkelstein approached retirement, a trend that is likely to persist in an era of ongoing budget cuts, rendering alternative sources of funding increasingly critical.

To begin creation of the private allergy and immunology fellowship fund Winkelstein now envisioned, Rales donated $10,000 and said that he would match whatever Winkelstein could raise. “We wanted to help ensure that America’s leading hospital could continue to improve treatments and advance science in these areas,” says Rales. “I’ve seen dramatic improvements in my own care over the years, with new developments in the field here, and wanted to see that they continued for others, too.”

Once challenged, Winkelstein wrote to his former fellows, seeking their support. Within a year, they’d raised enough money to fund at least one three-year fellowship position. At Rales’s suggestion, the new fund was named for Winkelstein.

“It’s a tremendous cause,” said Bradley E. Chipps, at the time. The program’s first pediatric allergy, immunology and pulmonology fellow, he was among the first to contribute to the fund: “Hopkins taught me how to incorporate medical literature in my daily practice. You need this analytic approach to treat immunologic disorders. Jerry was a terrific mentor.”

Another supporter and former fellow, Scott Sicherer added, “The fellowship provided me with lifetime mentors and colleagues who are also friends, and continues to produce the best of the best in pediatric allergy.”

Rales, who has ever since supported the Winkelstein Fellowship Fund in Pediatric Immunology in the Eudowood Division of Allergy and Immunology, upped the ante in the fall of 2013. He pledged $50,000 if the now-retired Winkelstein could match it by year’s end.

“Josh put it to me this way, ‘Let me help you raise $100,000,’” says Winkelstein, who wrote another letter to former fellows and current faculty. Funds totaling more than $50,000 poured in over the next three months, enriching the fund by more than $100,000.

“Thirty-five years later, I feel very fortunate to have been a small part of what has grown into one the finest allergy divisions in the world,” says former fellow Ken Schuberth.

Says Rales, “Jerry has become a very successful steward and fundraiser. He has built up a fund to help support the fellows he believes are crucial to breaking new ground and help more patients. My foundation stepped up its gift last year because we thought it prudent and appropriate to help maintain the caliber of people and research at Johns Hopkins.”

Current Winkelstein Fellow Mark Gorelik, who is studying the mechanisms of desensitization in peanut allergy and working on mouse models of asthma, adds, “My mentorship and guidance here have been second to none. I am deeply appreciative for the funding and support."

Winkelstein hopes the fund will grow with additional philanthropy to become an endowment, with funds sufficient to cover the salaries of all the fellows. For now, he says, it remains a safety net. “With the NIH’s budget shrinking for activities like research, it’s increasingly important for institutions to find alternative sources for funding, such as philanthropy, to drive their basic mission of research and training,” he says.

“Terrific people like Josh Rales are stepping up and making a substantial difference in some of the most important programs that Hopkins houses,” says Wood, a contributor to the Winkelstein fund. “Our fellows are critical to advancing our understanding of how the immune system works.”

With his support for the division, Rales joins generations of generous donors, chief of which is The Hospital for the Consumptives of Maryland (Eudowood) Foundation. Its board has also long supported the Johns Hopkins divisions of pediatric infectious diseases, pediatric pulmonology and neonatology.

“We are indebted to individuals like Rales and our Eudowood board members who have been such stalwart supporters of our mission,” says Johns Hopkins Children’s Center Director George Dover. “Countless children have a chance for long and healthy adulthoods because of what they all make possible here at Johns Hopkins. It’s a simple fact.”

For their part, pediatric allergy and immunology faculty and trainees continue to develop and deliver life-saving and life-altering therapies to more than 2,500 patients each year for the treatment of primary immunodeficiencies and environmental and food allergies.

Primary immunodeficiency disorders–also called primary immune disorders or primary immunodeficiency–weaken the immune system, allowing repeat infections and other health problems to occur more easily. Many people with these inherited conditions are born missing some of the body’s immune defenses, which leaves them more susceptible to germs that can cause infections. In its lab and clinics, division specialists provide diagnoses and long-term management for patients of all ages.

Most of today’s allergy and immunology faculty members are former fellows. They are investigating the basic mechanisms of milk, egg, peanut, and tree nut allergies, and the effectiveness of immunotherapy in potentially curing them. In other research, they are studying the role of cockroach and mouse allergens in flare-ups among inner-city children with asthma. Former fellows Satya Naivety and Justin Skripack were among the investigators who, in 2013, showed that some children treated for milk allergies with progressively higher doses of milk, a method known as oral immunotherapy, lose tolerance over time, while others remained symptom free long-term.

“Many children were still clearly better off with treatment,” says lead investigator and former fellow Corinne Keet, a pediatric allergist in the division.

In this challenge to preserve all that the division has become, “Josh Rales opened my eyes to my responsibility to sustain what we’ve developed here and then to make it happen,” says Winkelstein. “I’ve learned from him some of the ways in which you can effect success in fundraising. You have to get people involved, to recognize the importance of your mission, and to understand how the funds will be used.”

This voyage of philanthropy has solidified his own devotion to Johns Hopkins. “Johns Hopkins allowed me to practice medicine the way I thought it should be practiced and gave me the opportunity to explore research in my chosen field of immunology,” says Winkelstein, who, too, was an immunology fellow, as well as a pediatric resident, at Johns Hopkins. “I feel a responsibility now to see that this division on which so many children and families depend can continue its research and training.”

At Johns Hopkins, Rales is one of many adults whose condition is best managed by pediatric specialists. Today, in the care of pediatric immunologist Howard Lederman, who is director of the division’s immunodeficiency clinic, pediatric immunology laboratory and A-T clinical center, Rales can extol with confidence the soundness of the institution and its mission: “There’s nothing like personal experience at this place to recognize its greatness.” 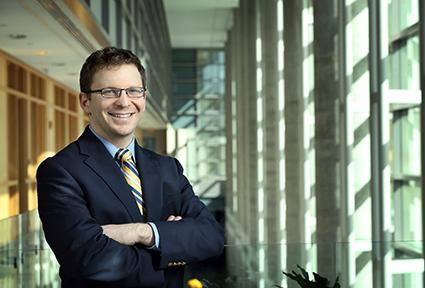 New medical breakthroughs in allergy and immunology will be built on philanthropy. It is the critical fuel for funds and endowments that powers promising clinician scientists Winkelstein Fellows like Mark Gorelik, above, in their pursuit of better therapies and even cures. Endowed funds have the added boost of ensuring continued financing of vital laboratory and clinical research. The Winkelstein Fund is on its way to becoming an established endowment, but needs your support to get there. More about the exciting research of Dr. Gorelik and our other Allergy and Immunology fellows. To learn how you can become involved with our philanthropic effort, contact the Office of Development at Johns Hopkins Children's Center, 410-361-6493.

This article by Wendell Smith appeared in the summer 2014 issue of Hopkins Children's Magazine.