Myths About Smoking and Lung Cancer

Myth: You Can’t Get Lung Cancer If You Don’t Smoke

But there are other risk factors for lung cancer. According to the U.S. Environmental Protection Agency (EPA), naturally occurring radon gas causes about 20,000 cases of lung cancer a year, making it the second-leading cause of lung cancer in the U.S. Radon gas comes from rocks and dirt, and the gas is trapped inside buildings. There are ways to test for and lower high-radon levels in buildings.

Other workplace substances that can increase lung cancer risk include asbestos, arsenic, diesel exhaust, and some forms of silica and chromium. The World Health Organization also (WHO) recognizes air pollution as a cancer-causing agent, and says that lung cancer is responsible for 6% of the 3.2 million annual air pollution-related deaths worldwide.

Cancer survivors who have been treated with radiation therapy may also have a higher risk of lung cancer, Yarmus noted. “And recently we have discovered genetic mutations that place patients at risk for lung cancer in both smokers and nonsmokers. There is a great deal of research effort ongoing into these mutations to help better understand lung cancer and how to target specific treatments.”

Myth: Lung Cancer Is The Only Kind Of Cancer Connected To Smoking

Smoking contributes to a host of other health problems as well, including heart disease, stroke, respiratory disorders from asthma to emphysema, low birth weight and erectile dysfunction.

Myth: I’ve Smoked For Years, So Cutting Back or Stopping Smoking Altogether Won’t Reduce My Risk of Lung Cancer

Truth: “It’s always better to quit,” Yarmus says. “We know from several studies that smokers who are diagnosed with lung cancer that then quit after the diagnosis are better able to tolerate the treatments and can live longer than those who keep smoking.”

Smokers may have permanent damage to their lungs, he explains, but “even though there may be permanent damage there are likely areas of the lung that have not had significant scarring and will heal after you stop smoking and that healing often results in improved lung function and exercise capacity.”

According to the National Cancer Institute, studies have shown that smokers who quit at about age 30 can reduce their chance of dying prematurely from smoking-related diseases like lung cancer by more than 90 percent. If you quit at age 50, you can reduce this risk by 50 percent. And if you quit at age 60, you’re still more likely to live longer than those who keep smoking.

Truth: Yarmus says that about 7,300 people who never smoked die from lung cancer due to secondhand smoke every year. Some studies suggest that the amount of cancer-causing chemicals in tobacco smoke is higher in secondhand smoke than in smoke inhaled by smokers. What’s more, living or working with a regular smoker can increase a nonsmoker’s risk of lung cancer by 20 to 30 percent. The National Cancer Institute says there is no “safe” level of exposure to secondhand smoke.

Myth: I Only Smoke a Pipe/“Light” Cigarettes/Cigars/Bidis/Hookahs, So I Don’t Have the Same Risks of Lung Cancer As A Cigarette Smoker

Truth: All tobacco products contain nicotine and cancer-causing substances, which increase the risk of lung cancer. According to the National Cancer Institute, for instance, cigar smoke may contain even more toxic substances than cigarettes, due to the way the tobacco is cured. Cigars also contain more tar and are smoked for longer than cigarettes, adding to their harm.

Some studies show that people who smoke “light” cigarettes try to compensate for the lower levels of tar and nicotine in the cigarettes by inhaling more deeply, which can be bad for the lungs as well.

Myth: I Exercise and Take Antioxidant Vitamins, So That Should Protect Me Against Lung Cancer Even Though I Smoke

Truth: Eating healthy and getting regular exercise are great for your health, but they won’t undo the risks of smoking. Some studies have shown that regular physical activity can reduce the risk of lung cancer, but it is unclear whether this activity produces the same results in smokers.

“Research has not shown convincingly that taking antioxidant or vitamin supplements can help reduce the risk of developing or dying from cancer, and some studies have even shown an increased risk of some cancers,” Yarmus says. He said there have been nine randomized studies of supplements for cancer prevention, “and none have shown it helps reduce lung cancer risk and in several cases actually increased the risk. For example, patients in two studies that took beta-carotene supplements showed an increase in risk of lung cancer.”

Myth: I Want To Quit Smoking, But I’ve Heard That Nicotine Replacement Products Might Also Cause Cancer

Truth: “To my knowledge there are no studies that have linked nicotine replacement therapy) to cancer,” Yarmus says. “Of the thousands of chemicals found in tobacco, we know almost 100 of them are known to cause cancer. We also know that nicotine replacement therapy can help reduce or quit smoking, which will then reduce the risk of being exposed to these other cancer-causing chemicals, so any potential harm is far outweighed by the benefit of quitting.”

Myth: I’m a Smoker, But I’m Too Young to Get Lung Cancer

Truth: The average age of a lung cancer patient in the United States is 70. However, about 30,000 people under the age of 50 will be diagnosed with lung cancer each year, and about 21,000 of them will die from the disease. Your risks of getting lung cancer at a young age may be determined in part by factors such as radiation therapy for a childhood cancer, or a genetic predisposition to lung cancer.

Myth: Everyone Dies From Lung Cancer

Truth: Lung cancer is the leading cause of cancer death in the United States, in part because the disease is often discovered at a late stage when it has already spread to other parts of the body. Over half of people with lung cancer die within one year after their diagnosis. However, detection and treatment of lung cancer have improved in recent years.

The U.S. Preventive Services Task Force (USPSTF) recommends an annual CT scan to check for signs of lung cancer in adults between the ages of 55 and 80 who have smoked the equivalent of 30 pack-years (a pack-year is the equivalent of 20 cigarettes per day for a year).

Experts at the Kimmel Cancer Center Lung Cancer Program are researching new ways to personalize the treatments for patients with lung cancer, and in detecting special genetic and molecular markers in lung cancers that determine how the cancers grow and spread. 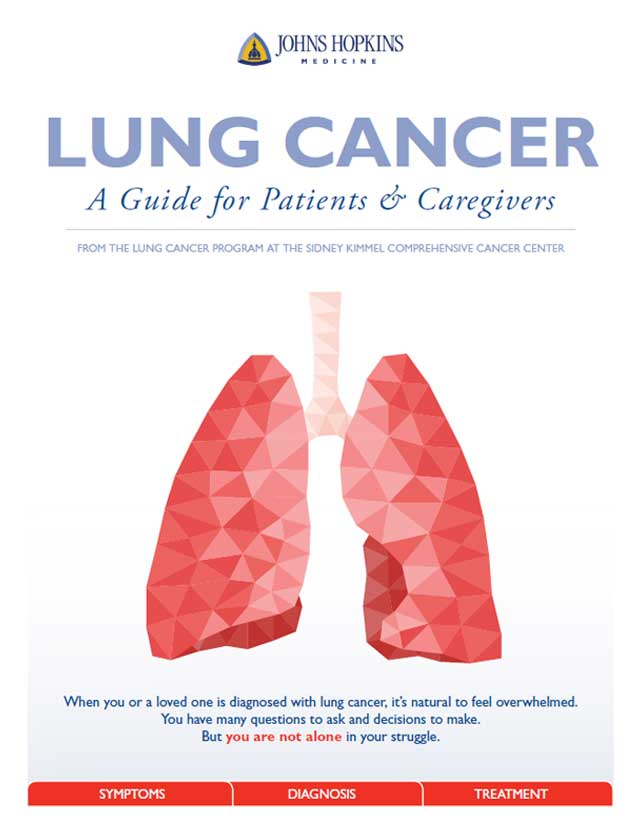 For an appointment and answers to your questions