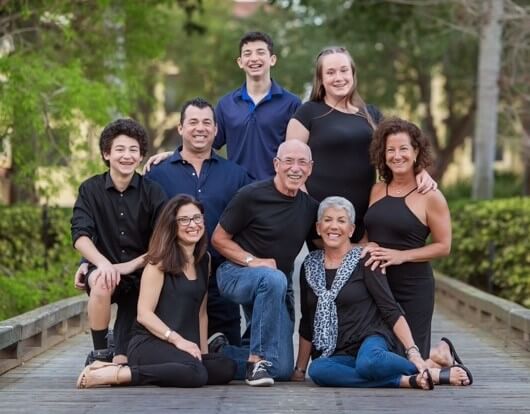 Sarann and her family.

Sarann Kraushaar, who had always maintained an active lifestyle including teaching exercise classes for 20 years, considered herself to be the picture of health. That is until one day just shy of her 70th birthday, when she started to experience some unfamiliar health issues, including feeling overwhelming exhaustion while doing her regular activities.

Concerned about the sudden change in her energy level, Sarann brought her symptoms to the attention of her concierge physician and learned she was experiencing episodes of atrial fibrillation (AFib), a condition marked by irregular heart rhythms, also known as arrhythmias. Because AFib causes blood to pump more slowly, it increases the risk of developing dangerous blood clots. If pumped from the heart to the brain, they may lead to stroke. Sarann knew she didn’t want this diagnosis to go untreated, so she found a doctor to try to help regulate her heart rhythm in her home state of Florida.

All was well until December 2013 when, upon arriving in Argentina to embark on a cruise to Antarctica, she came down with pneumonia, causing her heart rate to soar from the normal heart rhythm of 60–100 beats per minute to an alarming 180 beats per minute. Sarann knew her AFib had returned.

“Together with my family and physicians, I made the decision to fly home to be closer to care,” she says, recalling the beginning of a five-month period of failed electrical cardioversions, procedures to shock the heart back into rhythm. Not only did the cardioversions either completely fail, or result in only a very fleeting return of normal rhythm, but she was found to have a prolonged period of asystole (heart stoppage) after cardioversion, which required the implantation of a permanent pacemaker.

Even with the pacemaker and medications, Sarann’s AFib was not controlled, so she, her husband and daughter decided it was time to go to Johns Hopkins. At the recommendation of her concierge physician, she set up an appointment to be evaluated by Hugh Calkins, M.D., professor of cardiology and director of the Electrophysiology Laboratory and Arrhythmia Service at The Johns Hopkins Hospital. Within a week of calling, she saw Calkins in his office and underwent her first successful cardioversion. “Dr. Calkins was an absolute pleasure from the beginning. He listened so patiently and exhibited the confidence and expertise necessary to assure me that my problem could be solved,” she says.

Sarann says she felt euphoric after the success of her cardioversion. “Prior to meeting Dr. Calkins, I had felt like I was on a merry-go-round, going in the same circles but seeing no results. I enjoyed the feelings of euphoria for about five months, until my AFib returned that fall,” says Sarann, who again sought Dr. Calkins’ expertise once the bouts became more frequent and started to interfere with her quality of life.

Recognizing the need to try a different approach to control Sarann’s symptoms, Calkins recommended a catheter ablation procedure, a minimally invasive procedure that allows physicians to cauterize areas of heart tissue that are responsible for causing atrial fibrillation.

During the procedure, Sarann was placed under general anesthesia. Calkins guided several thin wires into Sarann’s leg, through blood vessels and into her heart. Using electrodes at the end of the catheter, he identified the areas of the heart that were causing Sarann’s atrial fibrillation. He then used radiofrequency heat energy to destroy this problem area, correcting the arrhythmia. Sarann underwent two additional ablation procedures over the course of the next two years and has been symptom-free since her last procedure on June 29, 2016.

“Before I met Dr. Calkins, I felt tired, depressed and couldn’t live my life to the fullest. My AFib was greatly impacting my quality of life,” Sarann explains. “Now, I feel great and have no limitations. I’ve done a lot of traveling within the past year and am enjoying my life again.”

She adds, “What I, as well as my family, find to be utterly amazing about Dr. Calkins is his level of accessibility. He is always there when I need him, and he has always responded quickly whenever I contacted him or had questions.”