Giant Cell Arteritis (GCA) is often a difficult problem for the physician because it is common, serious, has a myriad of presentations, often reoccurs, and the treatment is very difficulty with frequent iatrogenic problems.  Several questions will be addressed in this review based on these cases:

Recognition of GCA is difficult in a well established patient who is elderly and typically has many confounding chronic health problems.

A well established, 70 year old female patient since 1985 has controlled hypertension with no complications.  She is a smoker and takes clonidine, hctz, and estrogen.  Overall, she is well and fully active.

Patient presents with fatigue for about 1 month associated with the withdrawal from estrogen because of recently publish data suggesting an increased risk of breast cancer and other complications.  Exam, including review of systems, CXR, and PPD, is negative except for the following: 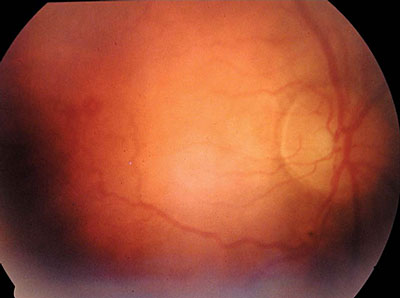 One week later, the patient appears even more ill and Fundi (image right) shows a subtle abnormality.  Note the faint red spot in periphery of retina.

She was immediately put on high doses of oral prednisone (60 mg/day).  She felt somewhat better in about 3-4 days.  However, one week following initiation of treatment, she became acutely ill primarily with cardiac symptoms, dyspnea and fatigue.  The following tests were done:

Patient improves on prednisone, isosorbide, hydralazine, metoprolol, but rash develops on ACE.  Osteopenia (by DEXA) develops most likely resulting from the prednisone treatment.  Additionally, the patient’s blood pressure and glucose become difficult to control.  As a result of the hypertension and diabetes, tapering of the prednisone to 15 mg/day over 10 weeks is attempted.  When prednisone reaches 15 mg/day, GCA symptoms return; recurrent fever, headache, fatigue, and her sed rate increases from 4 to 73.  The prednisone is increased to 40 mg/day.

Patient slowly but steadily improved and felt back to normal after she was on prednisone for about one year.  The prednisone was slowly tapered until she had been treated for about 18 months and reached 10 mg/day.  A bisphosphonate was added to prevent osteoporosis.

The patient remained asymptomatic when the prednisone was completely stopped 24 months following initiation of treatment.  Her sed rate and CRP are normal and the blood pressure and diabetes were easy to control off prednisone.  Due to the unexpected death of her husband about one month after stopping prednisone, depression developed.

Symptoms began to recur 4 years after first episode, just over 2 years after discontinuing prednisone.  Symptoms included fatigue and loss of appetite.  The patient commented “I can’t believe it but I think I’m getting my illness back”.  Her sedimentation rate was 95 and CRP was 10.  Given the complexity of the patient’s story and illness emerging at the time of a slowly improving depression, another biopsy was performed and was positive for GCA.  The symptoms were fully controlled in 2-3 weeks after resuming prednisone treatment.

An 84 year old woman has a history of diabetes mellitus, osteoarthritis (OA), COPD, and is wheel chair bound secondary to OA of the knees.

This patient presents with a GI bleed, weight loss and abdominal pain.  Her sedimentation rate is 68 and CRP is 4.  A 1 cm single temporal arterial biopsy is negative for GCA.  The suspicion of GCA was high, and she was treated with predinisone even with a negative biopsy because of the less than ideal specimen.

Prednisone 40 mg per day was prescribed and symptoms were fully under control in one month.  Her sedimentation rate and CRP were normal after 6 weeks of treatment.  After 20 months, the prednisone was discontinued.  Patient had marked problems with high blood pressure and diabetes when on prednisone. 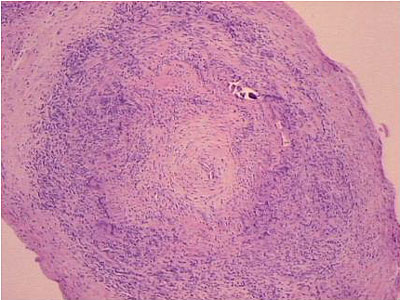 Four years after the initial episode and 2 ½ years after discontinuing prednisone, patient develops increasing symptoms over 3 weeks of headache, jaw claudication, scalp tenderness, and myalgias.  There is no fever, weight loss, abdominal pain or bleeding.  Her sedimentation rate is 55 and CRP is 8.2.

This presentation is different from that of the first episode when the diagnosis of GCA was made but nevertheless is highly suggestive of recurrence.

A biopsy of the temporal artery (picture right) shows marked inflammation and necrosis.

At higher power (right), giant cell arteritis and destruction of elastin elements of the artery are evident. 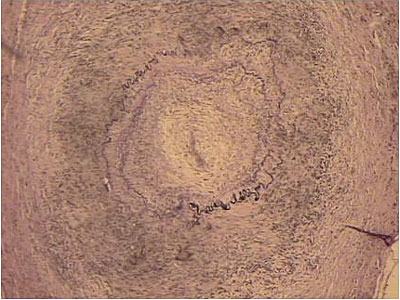 Prednisone 60 mg/day was started.  She was also given a bisphosphonate to prevent osteoporosis.  After six months, the prednisone was slowly tapered to 10 mg/day.  The patient subsequently developed atrial fibrillation and diverticulitis which was probably incidental and reflects the complex situation of many elderly patients.

The patient is a very active, well 73 year old man.

Patient presents with polymyalgia rheumatica (PMR): myaligias, stiffness, wrist and ankle pain and swelling, fatigue and weight loss.  His ESR is 60 and CRP is 9.1.  Patient did very well on 20mg/day of prednisone and this was tapered slowly beginning 3 months after control of his symptoms.

However, symptoms recur, although the ESR and CRP remain normal.  The patient was treated with increased doses of prednisone and then one month after control of symptoms his dose was re-tapered to < 3 mg/day for 6 months before stopping, approximately 30 months after original diagnosis of PMR.

The patient did well for 3 months and then presented with difficulty in chewing food and fleeting pain in upper extremities.  There were no other symptoms and the ESR and CRP remained normal and on no medications.  A temporal artery biopsy is done and is positive for GCA.

Giant Cell Arteritis.  Worth noting, this patient is a likely host for GCA yet he has a normal ESR.

The patient is treated with 40 mg/day of prednisone for 4 weeks and then tapered by 5 mg/week until the patient reaches 20 mg/day.  A continual slow taper is continued.  A bisphosphonate is added to prevent osteoporosis.

GCA is really a systemic illness with many manifestations and a myriad of presentations.  It may be associated with coronary artery disease as in Case 1.

Some of the clinical features of GCA (derived in part from Machado reference)and their appromimate prevalence are as follows:

Other less common symptoms are:

1. GCA is a humbling illness to the clinician, especially for the primary care physician, because it emerges subtly in the patient with typically many other problems.

2. It is a common illness in elder with a myriad of manifestation, often very subtle

3. Recurrence is common, even with ideal treatment

4. Prednisone use in the elderly is very tricky

5. While a potential nightmare for the generalist, GCA is an exciting problem for the medical student because of its variety in presentation and pathology.