The Father of Active Surveillance

Carter, retiring as the Bernard L. Schwartz Distinguished Professor of Urologic Oncology, reflects on his 32 years at the Brady. 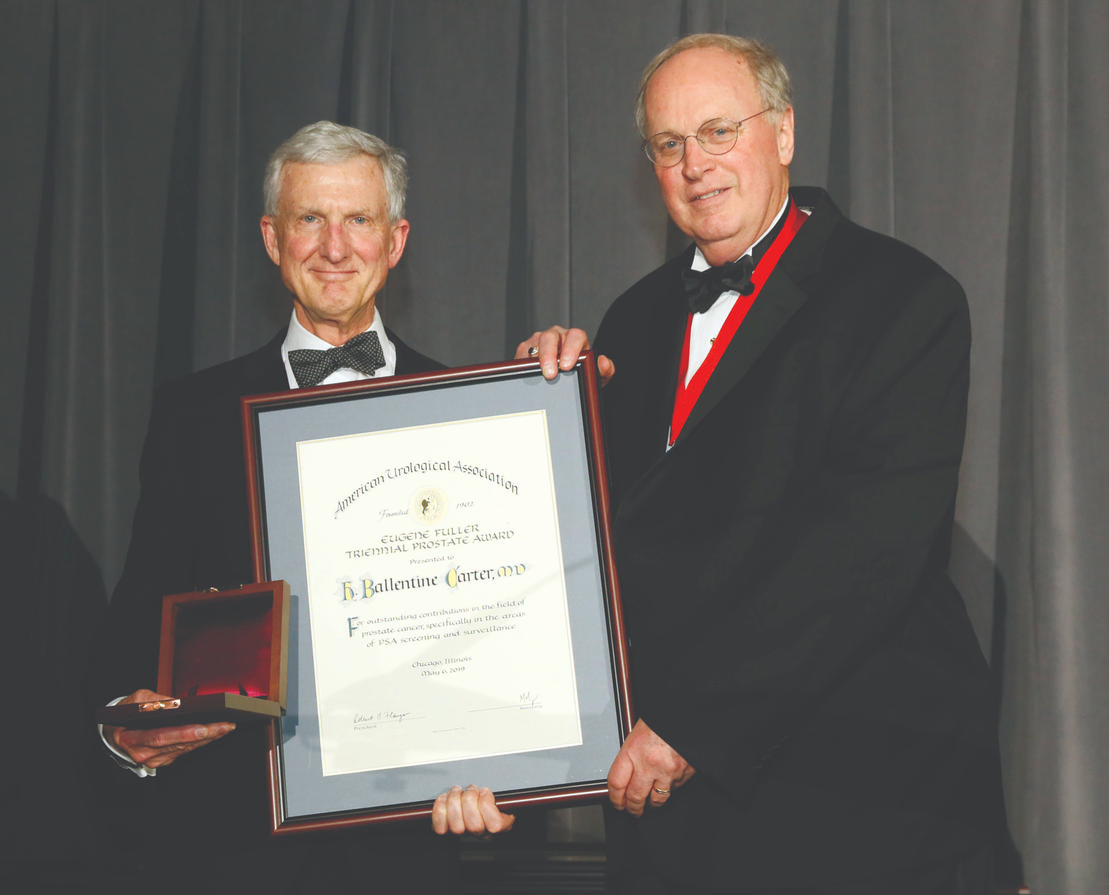 Bal Carter is the 2019 winner of the prestigious Eugene Fuller Triennial Prostate Award, given once every three years by the American Urological Association to an individual who has made an outstanding contribution to the study of the prostate and its associated diseases. This award is named after the famous 19th-century New York City urologist, Eugene Fuller, who pioneered the open suprapubic surgical approach for treatment of benign prostatic enlargement, and supported by a trust fund established by his family. Since 1977, the Award has been awarded to 13 urologists, nine of them former Brady residents or faculty: Clarence Hodges, William W, Scott, Patrick C. Walsh, John T. Grayhack, Donald S. Coffey, William J. Catalona, Thomas A. Stamey, and Peter C. Albertsen. The award was presented by AUA President Robert Flanigan.

The history of Johns Hopkins medicine is rich in fortuitous coincidence: the right people who happen to be at the right place at the right time. We are fortunate that one of these is urologist H. Ballentine Carter, M.D., who came to the Brady in 1987, after graduating second in his class at the Medical University of South Carolina and completing an internship and residency at New York Hospital-Cornell Medical Center.

“I was awarded an American Urological Association (AUA) Scholarship to work with Don Coffey (the Brady’s longtime Director of Research) for two years,” Carter recalls. “His lab was an amazing place to be, not just for the opportunity to work with Don, but with so many people who shaped my career, including: Evelyn Barrack, Tom Chang, Bill Nelson, John Isaacs, William Isaacs, Ken Pienta, Alan Partin, and Jonathan Simons,” to name a few. The galvanizing research environment inspired Carter to stay in academic medicine as a surgeon-scientist, and in 1989, then-Director Patrick Walsh hired Carter as a member of the Brady faculty.

“To say that Patrick Walsh had an impact on my professional life would be an understatement. His generosity in mentorship truly launched my career in urology.” Carter also credits his “amazing colleagues” at the Brady, who “generously gave advice to a junior faculty member,” including Fray Marshall, Chaz Brendler, Jacek Mostwin, Ray Stutzman, Bob Jeffs, and John Gearhart.

So here we have Carter at the right place to begin a fruitful career. But what about the right time? In the late 1980s, discoveries by Walsh and others had dramatically shaken up the field of prostate cancer treatment. Walsh’s transformation of the radical prostatectomy into a safer operation, and his discovery of the neurovascular bundles (allowing preservation of potency) suddenly made surgery into the gold standard for curing localized disease. At the same time, the discovery of PSA made it possible, for the first time, to learn about prostate cancer from a blood test. The problem was that nobody knew what to do with PSA, or how to use it along with the digital rectal exam and the new use of transrectal ultrasound- guided biopsy in diagnosing prostate cancer early. Widespread screening for prostate cancer did not exist.

“Until several papers were published, by William Catalona, William Cooner, and others, demonstrating that PSA was the most effective way to go about identifying prostate cancer early as a primary screening tool, there was controversy about even using PSA,” Carter recalls. “There were voices saying, ‘Beware, we’re going to uncover a lot of cancers that never should have come to light.’”

Next came controversy over the PSA threshold: what was the magic number that would indicate the need for a prostate biopsy? “In retrospect, that was probably the wrong thing to be asking,” Carter says. “There was just not a good understanding then of PSA as a continuum.”

Carter pioneered the concept of PSA velocity – the rate at which PSA rises over time. “But that’s never been tested as a screening tool. I honestly believe if we had not focused on a single, absolute threshold, and instead had focused on changes in PSA to alert us that someone has an aggressive cancer, in the long run we may have identified more individuals with the cancers that need to be treated, and eliminated more who don’t need to be treated. But that will require a carefully done, prospective trial.”

Once PSA screening started, as Carter, Walsh and others had predicted, there was a bubble – tens of thousands of men were diagnosed with prostate cancer – and then, over time, this leveled out. But in the early 1990s, Carter notes, “nobody knew that PSA levels would change. Until they started looking at it.”

“Have You Ever Heard of the BLSA?”

Carter started looking at it, in studies that would lay the foundation for PSA screening and also for safe, vigilant active surveillance as a mainstream treatment for low-risk prostate cancer. How that came about, he says, “was really the brilliance of Pat Walsh. When I first joined the faculty, he came to me and said, ‘What do you think would happen if we looked at changes in PSA?’ I said, ‘I think they’ll probably rise faster in people who have prostate cancer. How can we study that?’ And he said, ‘Have you ever heard of the Baltimore Longitudinal Study of Aging (BLSA)?’” The BLSA was conceived in 1958, when gerontologists at the Baltimore City Hospitals were trying to find a better way to study aging. At that time, and even today, scientists would compare men and women who were in their twenties to people who were decades older. But these scientists had a better idea: to revisit the same person every two years, with a history and physical and blood samples that were stored. This made it possible to look at men who had no prostate disease, benign enlargement, or localized or metastatic prostate cancer –and then work backward, describing the changes in PSA over the previous 20 to 30 years.

“I had never heard of it,” Carter continues. “He said, ‘Why don’t you go and shake the trees and see what falls out? I know they have a large frozen serum bank, and we might be able to use some of that to look at the question: do PSA levels rise faster in men who have aggressive
disease vs. men who don’t have prostate cancer?’ Sure enough, that’s the way it turned out. I did the work, but believe me, virtually everything that came out of the Brady in that era, Pat was the instigator, the mind behind the hypothesis. He’s just an amazingly brilliant man. I’ve never worked with anyone who could think more clearly. He has an amazing way of getting to the bottom of things.”

Patrick Walsh, in turn, places the credit squarely on Carter. “Simply stated and without exaggeration,” Walsh says, “Bal has changed the way prostate cancer is treated today around the world.” Although Carter is “a great surgeon,” he has done his best not to operate on men who don’t need it. “He was a voice of reason at a time when the diagnosis and treatment of the disease underwent revolutionary changes. With the introduction of widespread PSA testing in 1990, the diagnosis of prostate cancer reached epidemic acceleration and led to abuses fed by the greed of many fellow urologists. Those are tough words, but there is no other way to explain it. Bal emphasized the harm of overdiagnosis and overtreatment, proposed solutions based on improved screening practices, and developed guidelines for identifying men who should not be treated. He began by learning about PSA.”

Using blood samples that had been collected for decades by the BLSA, Carter  described how age and prostate disease influenced PSA. “Based on his unique observations, he proposed new ways to interpret PSA levels, and specified intervals for testing that were the most informative,” says Walsh. As Chairman of the AUA’s Guidelines Panel, Carter developed recommendations for how all urologists should screen for prostate cancer.

He also changed the way prostate cancer is treated for many men with localized disease. “In 1994, (Brady pathologist) Jonathan Epstein published his landmark work on the use of prostate biopsy criteria and PSA density to predict the presence of small-volume, low-grade prostate cancer at radical prostatectomy,” says Carter. “Recognizing that PSA testing was uncovering a substantial number of prostate cancers consistent with what was found at autopsy in most men who died of other causes, and that these men were undergoing radical prostatectomy for cure, we began to use the Epstein criteria to enroll men in a longitudinal study of expectant management, or active surveillance.” In 1995, Carter began the Brady’s active surveillance program for men with low-risk prostate cancer (about 40 percent of all men who are diagnosed with the disease). Since then, and with the help of Patricia Landis, who has coordinated the program for more than 20 years, the program has enrolled more than 2,000 men.

“Because of Bal Carter, active surveillance has become accepted as a standard-of-care approach to the management off avorable-risk disease around the world,” says Brady Director Alan Partin, M.D., Ph.D., The Jakurski Family Director and Professor, “and because of his work, many men have been able to avoid the side effects of unnecessary treatment.”

In recognition of his preeminence as an educator, Carter was elected President of the American Board of Urology. And in recognition of his outstanding contributions in the field of prostate cancer, he was awarded the highest honor bestowed by the Society of Urologic Oncology, the Charles Huggins Medal, and the American Urological Association’s Eugene Fuller Triennial Medal and its Distinguished Contribution Award.

Because of Carter’s work, urologists now recommend that men start getting their PSA tested in their forties. But when  should they stop? Carter recalls asking that question at a meeting with other BLSA scientists. “No one really knew what would happen if you measured PSA very early in life, in midlife, and then looked at outcomes later on. I had gotten really interested in screening for cancer, so I combed the literature. It just dawned on me, mainly from cervical cancer screening literature: What if very young men have PSA levels that are extremely low, and have cumulative numbers of negative tests – would that suggest later in life that they are very low-risk? As it turns out, if you’re in your 50s or early 60s and you have very low PSA, it’s unlikely that you’re going to be diagnosed with prostate cancer later in life. Is there an age and a PSA level where you could tell an older man,‘Congratulations, you made it, and you don’t ever need to have a PSA test again?’ Sure enough, you reach an age around 70, 75, and your PSA is less than 3, it is extremely unlikely that you will be diagnosed with lethal prostate cancer.”

What about intervals for screening?

In another study, published in JAMA, Carter and colleagues found that “PSA levels really don’t change rapidly in most people, even those who are going to develop prostate cancer. We found that intervals of two to four years were perfectly reasonable for detecting the type of cancers we wanted to detect.”

Looking back over his 32 years at the Brady, Carter says, “I would not change anything. I landed in the perfect spot, with unbelievable mentors and colleagues. It could not have been for me a better place, or better situation. I got to do everything I wanted to do.” With his wife, Lillian Carter, Ph.D., a professor of health education at Towson University, Carter has moved to “a house we built in 1993 on Bald Head Island,” in North Carolina. He is learning Spanish, which he intends to use while hiking in Latin America, and very soon will be hiking across England with a Brady alumnus, urologist Joel Nelson. “I’m also going to be looking for volunteer work,” he says, “to help people who are not as fortunate as I have been throughout my life.”