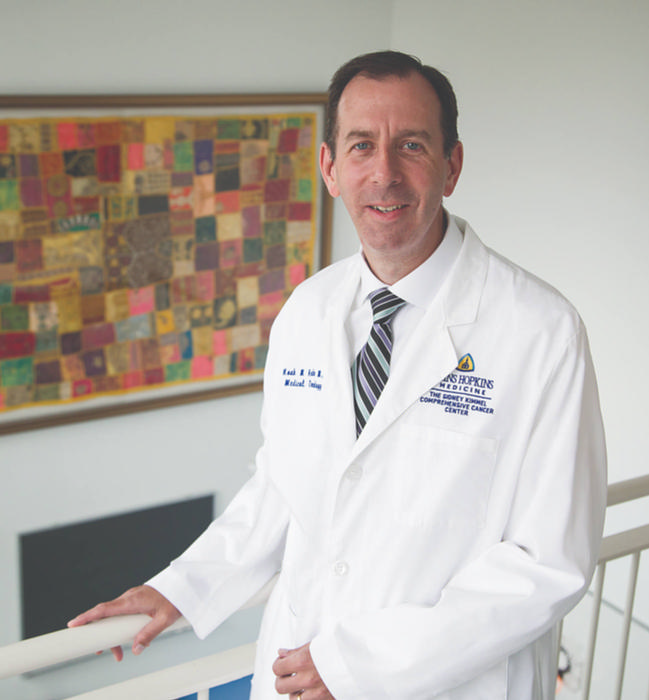 "Four out of six patients demonstrated a complete response, with no identifiable residual tumor seen at the time of surgery."

Medical oncologist Noah Hahn, M.D., presented results of the Johns Hopkins experience in treating sarcomatoid bladder cancer at the International Bladder Cancer Network’s Annual Meeting in Aarhus, Denmark, in October. Based on a complete response to neoadjuvant chemotherapy in a patient who initially was considered to have unresectable cancer, Hahn and urologist Trinity Bivalacqua, M.D., Ph.D., began offering “neoadjuvant multi-agent chemotherapy” – using a triple punch of cisplatin, gemcitabine, and docetaxel – before cystectomy to sarcomatoid bladder cancer patients seen at Johns Hopkins who were eligible for cisplatin-based chemotherapy. “Thus far, six patients have been treated with this more intense approach, followed by cystectomy,” says Hahn. “Our initial results are very encouraging, with four out of the six patients (67 percent) demonstrating a complete response, with no identifiable residual tumor seen at the time of surgery.” The news was good for the other two patients, as well: “Neither of the patients who had residual tumor in the surgery specimen, had growth of their cancer on treatment, and neither had any severe, unexpected surgical complications.”

Now, the scientists are examining the pre-treatment tumor samples from these patients “to examine the genetic basis of these encouraging responses,” says Hahn, “to help guide physicians in deciding whether all or only a portion of patients with sarcomatoid bladder cancer should be treated with this new, multimodality approach.”

Previously in Discovery, we reported on Hahn’s leadership of a clinical trial of an immune checkpoint-inhibitor drug, durvalumab, in patients with metastatic bladder cancer. “This study led to the FDA approval of durvalumab and provided bladder cancer patients with another much-needed therapy option,” says Bivalacqua, Director of Urologic Oncology. Recently, a team of Hopkins investigators led by Hahn, including Bivalacqua, Luigi Marchionni, Kellie Smith, Woonyoung Choi, Alex Baras, Marianna Zahurak, Gary Rosner, David McConkey, and Drew Pardoll, received a $3.2 million R01 award from the National Cancer Institute for their novel clinical and translational work proposed within the ADAPT-BLADDER trial.

“Within this study, bladder cancer patients with BCG-relapsing and BCG-unresponsive, non-muscle invasive bladder cancer will be treated with a number of novel immunotherapy combination approaches,” says Hahn, “including durvalumab plus BCG, and durvalumab plus radiation therapy.” The award will also fund novel genetic and functional immunology investigations, using patient samples collected within the study. “The ADAPT BLADDER trial is one of the first studies to bring urology, medical oncology, radiation oncology, pathology, and translational medicine together to create a new multidisciplinary care model for non-muscle invasive bladder cancer,” notes Hahn. “In this respect, it stands to serve as a transformative study for the bladder cancer field.”