He was “the father of modern science in prostate disease.” More than this, he was a great man. 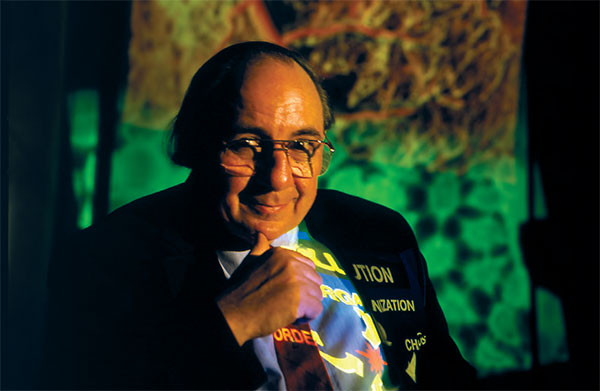 The Brady lost a good friend last year, and the international world of prostate cancer research lost one of its brightest stars, a brilliant scientist, scholar, thinker, mentor and teacher.

For more than half a century, Donald S. Coffey, Ph.D., made The Brady a better place just by being here; for 30 of those years, he was our Director of Research – a scientific legend who trained and inspired generations of fellows and students and was a powerful driving force in the careers of dozens of scientists who were trying to understand prostate cancer. A gifted storyteller, he not only ignited the imagination and creativity of his students and colleagues; he genuinely cared about them. He was remarkable for his quick mind and gift for cutting through even the most intimidating scientific challenges to find the simple questions at the heart of them.

“Don was a genius,” says longtime friend and colleague, Patrick C. Walsh, M.D., Distinguished Service Professor Emeritus. He credits Coffey’s “brilliant ability to simplify” as the key factor in one of Coffey’s most important discoveries, the nuclear matrix of cells, the scaffolding that provides the structure of a cell’s nucleus, and helps organize its DNA. In cancer cells, Coffey discovered, the nucleus looks different. “As a non-pathologist,” explains Walsh, “he was able to simplify the pathology of cancer down to one rule: The nucleus is irregular. He then set out to find what makes a nucleus round, and in the process, discovered the nuclear matrix.”

But of all of Coffey’s achievements, the most important is that he has attracted, inspired, and trained the leaders in the field. “He is truly the father of modern science in prostate disease because of the many scientists he has personally trained, and the hundreds of others he has influenced,” says Walsh. “Today, when one looks at the leaders in urological research, every one of them has the imprint of Don Coffey, one way or another.”

Alan W. Partin, M.D., Ph.D., didn’t know he wanted to be a urologist until he spent four years working in Coffey’s lab as a graduate student; before that, he had wanted to be a pediatrician. “Don Coffey had the most unique grasp of human nature I have ever witnessed,” says Partin. “He touched the lives of countless individuals both within urology and oncology, and pressed them always to ask the question, if this is true, what does it mean?”

Coffey’s approach to teaching was simple. “Tell me the smartest people, and I don’t care what they do, I’m helping them.” A partial list of his former graduate students includes some of the top scientists in urology and oncology: Alan Partin, William Nelson, Ken Pienta, Ballentine Carter, Drew Pardoll, Arthur Burnett, Bert Vogelstein, John Isaacs, Herb Lepor, Angelo De Marzo, Shawn Lupold, William Isaacs, Andrew Fineberg, Alan Meeker, Lelund Chung, Warren Heston, and Jonathan Simons. “All these great people,” said Coffey. “It’s not that I teach them anything. It’s that, if you’re the best, I’ll give you an opportunity to do your thing, and we’re on our way.”

Among many other honors and awards, Don Coffey served as President of the American Association for Cancer Research, the largest cancer research society, with 35,000 members from 110 countries. He was President of the Society for Basic Urologic Research, and served on several major editorial boards. For 19 years, he served as a member of the National Prostatic Cancer Program of the National Cancer Institute, and as National Chairman of this board for four years. He published more than 250 research papers. Coffey received the Robert Edwards Award from the Tenovus Institute, both the Fuller Award and the Lifetime Achievement Award from the American Urological Association, the First Society of International Urology- Yamanouchi Research Award, that society’s highest research award, and the Distinguished Service Award from the American Cancer Society.

In 2015, Coffey received the American Association for Cancer Research’s highest honor, the Margaret Foti Award for Leadership and Extraordinary Achievements in Cancer Research. He was the recipient of two Merit Awards from the National Institutes of Health.

Said Coffey about his work: “I’ve dedicated my life; I hope to die doing this. I don’t need any more honors, I’m paid more than I’m worth, I probably should get out of the way, but I still have questions.”

In honor of Don Coffey’s great ability to inspire and encourage so many young scientists, The Brady has set up the Dr. Donald S. Coffey Memorial Fund for Research, to support mentoring of future generations of urologic researchers. If you would like more information or are interested in supporting this fund, please contact Sushmitha Kosuri in the Brady Development Office at 410-955-8434.