“Some of these alterations are directly associated with poor prognosis.” 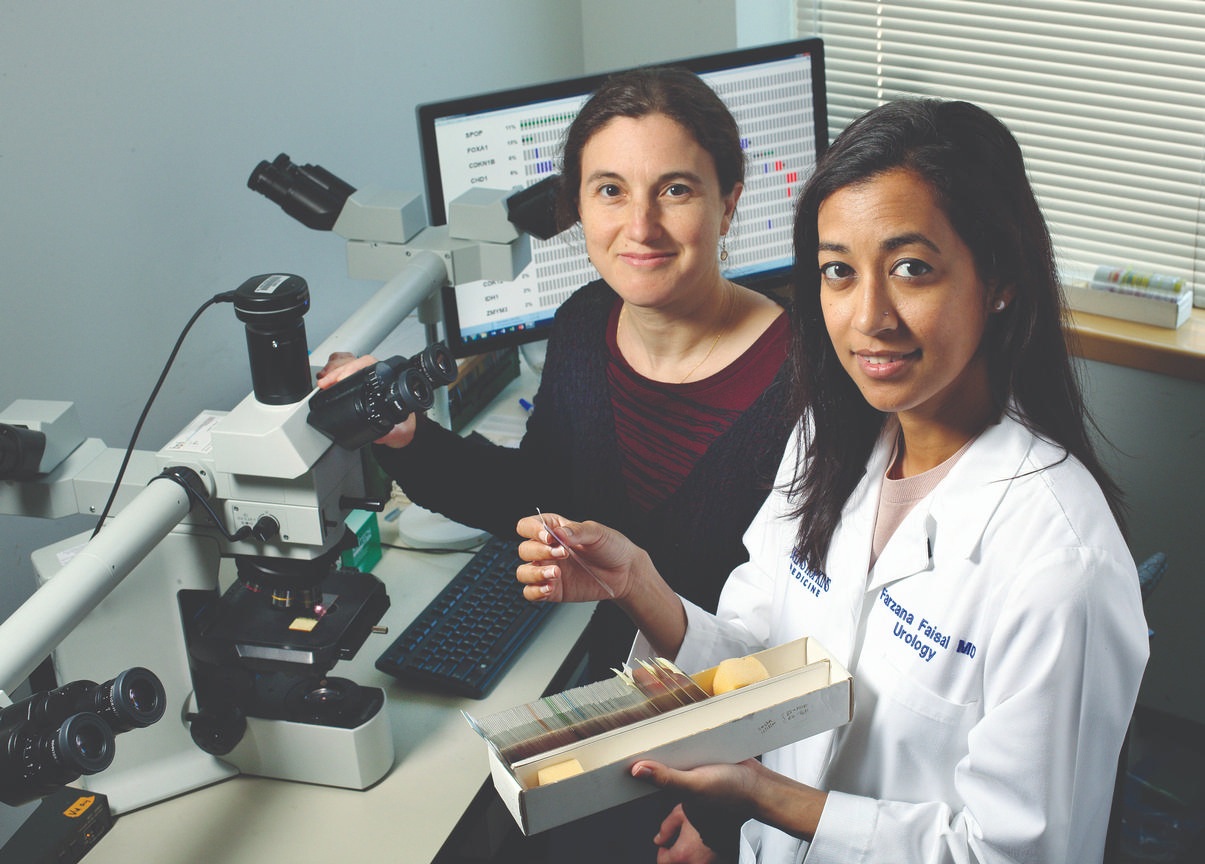 Lotan and Faisal: “The poor prognosis of patients with deletions in the CDKN1B gene has important clinical implications for African American men.”

Why are African American men 1.5 times more likely to get prostate cancer, and more than twice as likely to die of it as men of European descent? Brady investigators have discovered critical, inherited genetic mutations in men of African descent. Their work gives scientists new genes to look for – and new targets for precision diagnosis and treatment.

“We have identified several molecular and genomic alterations of prostate cancer that are unique to African American men,” says Brady resident Farzana Faisal, M.D., who began this research several years ago as a Johns Hopkins medical student, working with Brady scientists Tamara Lotan, M.D., and Edward Schaeffer , M.D., Ph.D. (now Director of Urology at Northwestern University). “Importantly, some of these alterations are directly associated with poor prognosis.”

Many studies of prostate cancer patients worldwide have been done on groups of entirely or primarily Caucasian men; but the Hopkins scientists have learned that the genetic markers that can signal aggressive prostate cancer in men of one race don’t always apply to men of other races, and vice versa. Thus, Faisal, with the direction of Lotan, performed targeted genome sequencing in a group of African American patients – the largest cohort to date.

“We found that mutations in the TP53 gene, deletions in the CDKN1B gene, and overall burden of genome alteration (percent of the genome with variations) were associated with increased risks of metastasis in African American men,” notes Faisal. “Our study was the first ever to correlate tumor genomic sequencing data with risk of metastasis in African American prostate cancer.” The team’s findings were presented at the American Urological Association, at the American Society of Clinical Oncology’s Genitourinary Symposium, and published in the Journal of Clinical Oncology and the Journal of Urology.

Faisal and colleagues are most excited about bringing the CDKN1B gene to light: “The poor prognosis of patients with deletions in the CDKN1B gene is a novel discovery that has important clinical implications for African American men,” Faisal says. One foreseeable implication might be in the type of treatment recommended: for example, an African American man diagnosed with localized prostate cancer who tests positive for a deleted CDKN1B gene might be encouraged to seek surgery or radiation, rather than undergo active surveillance. “These deletions were more common in younger men with higher-grade and -stage disease.” For this work, Faisal received the Physician Scientist Award at the 2019 Young Investigators’ Day at Johns Hopkins.