If You Have Lymph Node Metastases After Radical Prostatectomy, What Should You Do?

Determining factors included seminal vesicle invasion, a Gleason score of 9 or greater, having three or more positive lymph nodes, and having positive surgical margins. Men with one or more of these findings would benefit from ADT plus radiation. 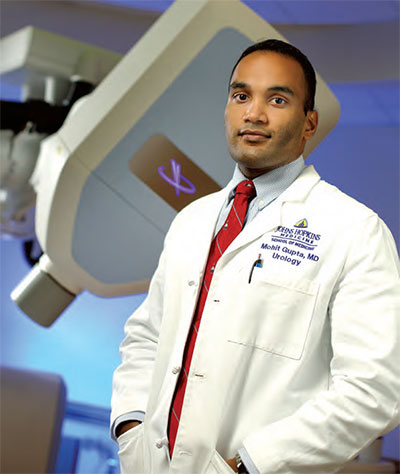 Gupta: “Despite having more aggressive disease, the men who received adjuvant ADT plus radiation did better.”

What should happen when a man is found to have lymph node metastases (LNM) after radical prostatectomy? Some doctors would advocate waiting; others would advise a course of androgen deprivation therapy (ADT), or external-beam radiation therapy – or both.

Which option is right? That’s a trick question: they all are, depending on whether or not the man has “adverse pathology.” A new analysis, published in the British Journal of Urology, provides much-needed guidance for men in this situation. In this Brady-led study using hospital records from the National Cancer Data Base, investigators looked at survival outcomes in 8,074 patients with LNM after prostatectomy between 2004 and 2013.

After surgery, 4,489 of these men were managed with observation; 2,065 were treated with adjuvant ADT; and 1,520 received adjuvant ADT together with external-beam radiation therapy. The average follow-up time for all patients was a little over four years.

“We found that the men who were managed with observation were older than those who received adjuvant ADT or ADT plus radiation,” says Brady urologist Mohit Gupta, M.D., the study’s lead author. “The patients treated with adjuvant ADT, or with ADT plus radiation had more aggressive pathology” – findings such as a higher pathological stage of cancer, a higher Gleason score, positive surgical margins, and a greater amount of cancer in the lymph nodes.

The Brady investigators, including Hiten Patel, Zeyad Schwen, Phuoc Tran, and Alan Partin, also found that certain pathological findings raised the likelihood of having lethal disease, “and men who have one or more of these independent predictors would benefit from receiving adjuvant ADT plus radiation,” says Gupta. These included the presence of cancer in the seminal vesicles, a Gleason score of 9 or greater, having three or more positive lymph nodes, and having positive surgical margins. “Conversely, we found no benefit in survival rates between the treatment groups in men who lacked any of these adverse features.”

Based on this research, “we conclude that patients with adverse pathology who are found to have LNM benefit most from adjuvant ADT plus external-beam radiation therapy.” However, “patients without high-risk features may be managed with observation and forego the complications associated with extra treatment.”