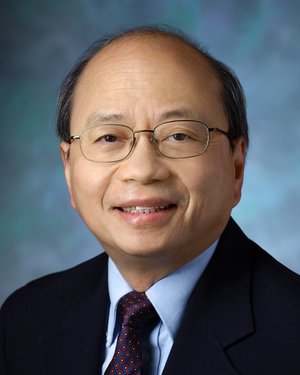 Dr. King-Wai Yau is a professor of neuroscience and ophthalmology at the Johns Hopkins University School of Medicine. Dr. Yau’s research focuses on the flow of molecular signals that are important to sight and smell. His discoveries have helped advance the understanding of many hereditary blinding diseases that affect these rod and cone cells.

Those discoveries include identifying the key roles of two key signaling molecules—calcium and cyclic GMP—in visual transduction, the process of how light is converted into electrical signals by the retina’s rod and cone photoreceptor cells.

In addition to helping to find the cause of a form of central vision loss, Dr. Yau also characterized the light-response behaviors of a newly discovered photoreceptor cell that responds to light and affects circadian rhythms and other non-image-forming visual functions.

The Yau Laboratory focuses on the study of sensory transduction – specifically, visual and olfactory transductions, which are the processes by which the senses of vision and olfaction (smell) are initiated.

Investigators are examining topics that include:

Dr. Yau and his laboratory study visual and olfactory sensory transduction, which have interesting similarities but also striking differences.

Visual transduction in retinal photoreceptors (the rods and cones) is known to involve a cGMP signaling pathway.

Recording from single, dissociated photoreceptors isolated from genetically modified mice and frogs is one assay they use to address specific questions about the details of phototransduction.

Unlike vision, which involves only a few visual pigments in rods and cones, olfaction apparently involves of the order of a thousand distinct odorant receptor proteins.

A key, still largely unknown question about olfactory transduction is how a given odorant receptor protein recognizes a specific set of chemicals (odorants).