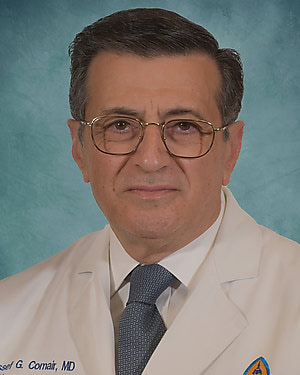 Dr. Comair is an internationally recognized neurosurgeon and sees patients for a wide range of neurosurgical needs. He offers surgical therapy for diseases of the brain and spine and has pioneered awake craniotomies for resection of intrinsic brain tumors. His surgical expertise also includes epilepsy surgery, deep brain stimulation for Parkinson’s disease and essential tremor, trigeminal neuralgia surgery, radiosurgery, treatment for hydrocephalus and herniated disc repair.

Dr. Comair has educated scores of neurosurgical trainees in the Middle East, North Africa region and the U.S., authored more than 120 publications in peer-reviewed journals and two leading textbooks of neurosurgery. He contributed chapters to more than 40 textbooks.

Dr. Comair has received multiple awards and recognitions and has been an invited visiting professor to the most prestigious neurosurgery centers. He is a diplomate of the American Board of Neurosurgery and a fellow of the royal college of surgeons of Canada. He serves on the board of directors of the World Society of Functional and Stereotactic Neurosurgery and has been elected to the pediatric epilepsy surgery committee of the International League Against Epilepsy (ILAE).