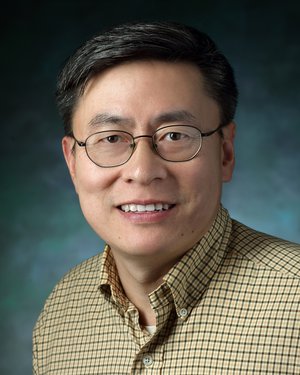 Dr. Xinzhong Dong is an associate professor of neuroscience at the Johns Hopkins University School of Medicine. Dr. Dong has identified many genes specifically expressed in the pain-sensing neurons of the brain’s dorsal-root ganglia.

Using approaches that include molecular biology, mouse genetics and behavior, and electrophysiology, his research examines the function of these genes in pain sensation.

Dr. Dong serves on the faculty of the Johns Hopkins Institute for Basic Biomedical Sciences and the Center for Sensory Biology, as well as on the Neurosurgery Pain Research Institute’s scientific advisory board.

He received his B.A. from Holy Cross College and his Ph.D. from the University of California, Los Angeles. Trained in molecular neuroscience, Dr. Dong completed a postdoctoral research fellowship at the California Institute of Technology. He joined the Johns Hopkins faculty in 2004.

He has published approximately 40 academic journal articles and was recognized as an early career scientist by the Howard Hughes Medical Institute.

Dr. Dong, trained in molecular neuroscience, has identified many genes specifically expressed in pain-sensing neurons in dorsal root ganglia. He is interested in studying the function of these genes in pain sensation by multiple approaches including molecular biology, mouse genetics, mouse behavior, and electrophysiology.

The laboratory will use these genes as molecular tools to understand the cellular properties of different subtypes of pain-sensing neurons with respect to neuronal circuitry in central projection and pain modalities. The laboratory also is investigating the molecular mechanism of how skin mast cells sensitize sensory nerves under inflammatory states.

Using mouse molecular and genetic techniques, Dr. Dong’s team found that the axons of Mrg-expressing nociceptors mainly innervate skin, but not visceral organs. This is thought to be the first known marker with such a specific innervation pattern.

His team also isolated several neuropeptides – including FMRFamide, NPFF, and g2-MSH – that function as ligands for Mrgs. Some Mrg ligands have been implicated in regulating pain sensitivity.

Studies conducted in the Dong Lab have shown that nociceptors are highly diverse at molecular level, and the roles of these neurons in nociception are far from understood.

With nociceptor-specific genes in hand, Dr. Dong’s research team is in an advantageous position to combine molecular biology and genetics with animal behavior and electrophysiology to gain new insights into nociception.