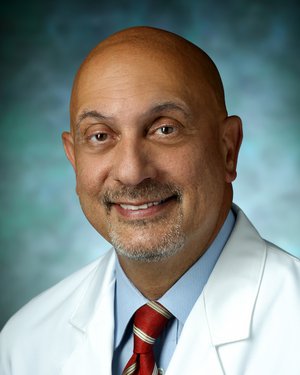 Dr. Roger Anthony Johns is a professor of anesthesiology and critical care medicine and medicine at the Johns Hopkins University School of Medicine. He specializes in cardio-thoracic anesthesia.

Dr. Johns and his group discovered the role of the nitric oxide pathway in mechanisms of anesthesia and have published important work implicating this pathway in the mechanism of plasticity associated with chronic inflammatory and neuropathic pain.

He earned his M.D. from Wayne State University. He completed an internship in internal medicine and anesthesiology as well as a residency in anesthesiology at the University of Virginia, where he subsequently conducted fellowships in molecular pharmacology and cardiac anesthesia. Additionally, he earned an M.H.S. in health policy management and a Ph.D. in public health at the Johns Hopkins University Bloomberg School of Public Health.

He is a member of numerous professional organizations including the American Medical Association, the American Heart Association, the American Society of Anesthesiologists and the International Anesthesia Research Society. He serves on several professional boards and committees, and is the editor of Pulmonary Circulation and American Journal of Physiology: Lung, Cellular, and Molecular Biology. He has published extensively and has won several awards for his research. He is board certified in anesthesiology.

Dr. Johns began his scientific career in the race to discover the identity of “endothelium-derived relaxing factor” or EDRF, which proved to be nitric oxide. This small, unassuming molecule (NO) has led him in a pursuit of the mechanisms underlying anesthesia, analgesia, pain and lung vascular biology. Discoveries include the regulation of NO production by high and low oxygen concentrations and NO’s role in lung biology, including pulmonary hypertension, ciliary motility, development and transition of the fetal pulmonary circulation. Dr. Johns and his group discovered the role of the NO pathway in mechanisms of anesthesia and have published important work implicating this pathway in the mechanism of plasticity associated with chronic inflammatory and neuropathic pain.

Dr. Johns also has an interest in health policy. He is a Robert Wood Johnson Health Policy Fellow of the Institute of Medicine, National Academy of Sciences (2005 - 2008) and served as a health and science policy advisor in the U.S. Senate 109th Congress. Current policy research interests and experience include approaches to coverage decisions for new technologies and pharmaceuticals, the impact of an aging population on health systems funded through pay-as-you-go social insurance, health information technology, and the science and politics of biogeneric drugs.

He has trained more than 30 students and fellows now in independent academic and industrial research positions around the world. He has been continuously funded by the National Institutes of Health for over 20 years.