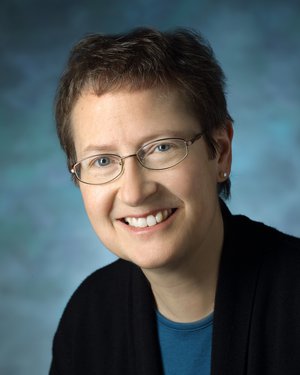 The Structure of the Nucleus

Dr. Katherine Lee Wilson is a professor of cell biology at the Johns Hopkins University School of Medicine. Her work explores the nuclear envelope, lamins and nucleoskeleton, as well as Emery-Dreifuss muscular dystrophy. In addition to her research duties, she is affiliated with the Hopkins Postbaccalaureate Research Education Program and the Hopkins Summer Internship Program.

Dr. Wilson has authored or co-authored numerous peer-reviewed publications and has presented her work at conferences and symposiums around the world. She serves on the editorial board of the Journal of Cell Science.

Within each human cell is a nucleus, “mothership” of the human genome and still the least-understood cellular structure. Chromosomes are enclosed by the nuclear envelope (NE) and communicate with the cytoplasm through Nuclear Pore Complexes (NPCs). The inner and outer membranes of the NE are mechanically connected by SUN-domain proteins and nesprins, which form LINC (links the nucleoskeleton and cytoskeleton) complexes. LINC complexes are anchored to nuclear intermediate filament (nuclear ‘lamina’) networks. Together the NE and nuclear lamina protect, organize and help regulate chromatin.

Research in the Wilson lab centers on the three key components of nuclear lamina structure: lamins, LEM-domain proteins, and BAF (Barrier to autointegration factor, encoded by BANF1). Mutations in one or more of these proteins cause a variety of diseases including Emery-Dreifuss muscular dystrophy (EDMD), cardiomyopathy, lipodystrophy/diabetes and ‘accelerated aging’ (progeria syndromes).

Loss of emerin typically causes X-linked recessive EDMD. Emerin protein is expressed throughout the body, but EDMD affects only three tissues, with contractures of major tendons, slowly progressive muscle wasting, and ventricular conduction defects that can cause sudden cardiac arrest. EDMD can also be caused by mutations in at least five other proteins including A-type lamins, nesprin-1, nesprin-2, LUMA (a membrane protein that associates with emerin), and FHL1 (a muscle-relevant transcription factor). Since most of these proteins interact, defects in a mechano-transduction signaling complex that includes these proteins might contribute to disease.

Current work aims to understand emerin’s role in mechanotransduction, how emerin and lamin A are regulated, and whether misregulation contributes to disease.