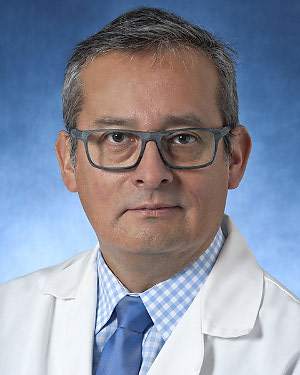 Dr. Juan Carhuapoma is an associate professor of neurology, neurosurgery, and anesthesiology and critical care medicine at the Johns Hopkins University School of Medicine. His areas of clinical expertise include critical care medicine, intracerebral and subarachnoid hemorrhage, and intracranial hypertension.

He earned his M.D. from the Universidad Peruana Cayetano Heredia. He completed his residency in neurology at Henry Ford Hospital and performed a fellowship in neurological critical care at Johns Hopkins.

Dr. Carhuapoma is a member of several professional associations, including the Neurocritical Care Society, the American Heart Association Stroke Council and the Society of Critical Care Medicine.

Dr. Carhuapoma’s overall research interests include three areas: (1) the role of pharmacologic neuroprotection of perihematoma tissue following intracerebral hemorrhage (ICH); (2) the different hemodynamic and metabolic aspects of neuronal blood flow and metabolism under physiologic conditions and after acute brain injury, as well as their significance in neurologic outcome; and (3) the use of advanced MRI techniques in the study and understanding of ongoing neuronal damage after brain injury to design and assess therapies used in neurologic critical care. More recently, Dr. Carhuapoma is establishing international collaborations to better understand the role of prognosis in the management of patients with devastating brain injury in other areas of the world.

Dr. Carhuapoma and his colleagues are investigating removal of an ICH with minimally invasive surgery and treatment with recombinant tissue plasminogen activator (rtPA). The goal of this study is to provide novel safety data that will change the way in which ICHs are treated, including previously unavailable data about the safety, efficacy, and pharmacokinetics of rtPA, as well as MIS data regarding the validity and safety of patient selection, quantitation of surgical effectiveness, patient stability, and disease/treatment-related complications. The study results also will provide the first estimates of the relationship between initial disease severity and long-term outcome for ICH. These data are critical to reducing brain injury from the only stroke subtype for which no adequate treatment is available.

In a study supported by the Food & Drug Administration, Dr. Carhuapoma and his colleagues are conducting a multicentered clinical trial of thrombolysis for intraventricular hemorrhage, the results of which will allow for the development of an effective treatment for intraventricular hemorrhage and demonstrate the safety and efficacy of thrombolysis with rtPA for that type of stroke.