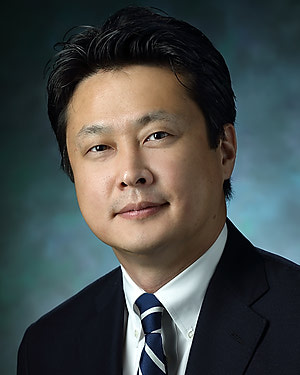 Dr. Lee is currently Associate Professor in the Department of Neurology and Neuroscience at Johns Hopkins School of Medicine, where he continues his research on neural diseases and muscular dystrophies. His lab has established a novel methodology for direct derivation and prospective isolation of neurons, glia cells and skeletal muscle, from human pluripotent stem cells (hPSCs). Using these patient-specific hPSC model, they are studying disease mechanism, finding therapeutic compounds and developing cell therapy strategies.

We developed a new methodology to directly derive and prospectively isolate thousands of millions of expandable and fusion-competent myoblasts from hESCs/hiPSCs. Using multiple genetic reporter hESC lines, we are recapitulating step-wise human myogenesis, comprising pluripotent stem cells, somite cells, adipomyocytes and putative satellite stem cells. Further, hiPSCs of Duchenne muscular dystrophy and facioscapulohumeral muscular dystrophy are providing us unique opportunities to learn more about the devastating muscular dystrophies. Recently we also found a way to direct hESCs/hiPSCs into 'satellite' cells that have capabilities to engraft and repopulate in in vivo niche.

Stem cell fate is largely determined by a complex cell signaling network. Our understanding and approaches to modulate such stem cell signaling networks is limited by the lack of precise control in single cells. In order to understand the operational principles of this network and physiological and pathological events, it is imperative to control signaling protein activities and subsequent cellular fates with great temporal and spatial precision. We have introduced light-sensing actuator modules into human pluripotent stem cells (hPSCs) to mimic fibroblast growth factor (FGF) signaling pathways via light illumination without using recombinant FGF protein. This method allowed us to maintain long-term stemness of the hPSCs. We are currently expanding this concept to the transforming growth factor beta (TGF beta) signaling pathway and the glial-derived neurotrophic factor (GDNF) signaling pathway, to control cellular fates and promote neuronal survival of hPSC-derived neurons. Furthermore, by utilizing the protein aggregation properties of light-sensing modules, we will accelerate the aggregation of pathgoenic proteins, which will facilitate our understanding of the pathogenic mechanisms of proteinopathies. This project is expected to enhance our understanding of stem cell specification and utilization of stem cells in disease modeling, and ultimately lead to substantial advancements in modulation of transplanted cells in vivo.

Previously, our group studied neural crest stem cells created from fibroblasts of patients with Familial Dysautonomia (FD), also known as Riley-Day syndrome, an inherited genetic condition that affects the peripheral nervous system. Although researchers know that FD is caused by a single point mutation in the IKBKAP gene, it is not clear how symptoms, like inability to feel pain and changes in temperature, manifest. We found that FD-specific neural crest cells expressed low levels of genes needed to make autonomous neurons—the ones needed for the “fight-or-flight” response. The FD-specific neural crest cells also moved around less than normal neural crest cells. Moving forward, as an effort to discover novel drugs to treat FD, we performed high throughput screening with a compound library using FD patient-derived neural crest stem cells to look for compounds that increased gene expression and protein levels of autonomous neuron developmental components. These studies set a paradigm of hiPSC studies, including developing differentiation protocol, disease modeling with patient hiPSCs and high throughput drug screening. Now we are advancing from neural crest to autonomic neurons and multicellular system. Our PHOX2b::GFP+ sympathetic neurons and their functional connection to target tissues (cardiac syncytia), which will lead us to investigate aberrant neuromodulation in patient-specific manner.

How our body can sense million of different stimuli with limited numbers of sensory neurons? How our ‘sensors’ can perceive specific stimulus? The fate decision and physiological functions of individual sensory neurons should be choreographed by multiple molecular processes, which are closely related to the pathogenesis of many human pain disorders. Using iPSC lines of congenital sensory disorders, Congenital Insensitivity of Pain and Anhidrosis (CIPA) and Congenital Insensitivity of Pain (CIP), we are interrogating these questions with human TRPV1::GFP+ nociceptive and MRGPRX1::GFP+ pruriceptive neurons.

Charcot-Marie-Tooth 1A (CMT1A) is one of the most common genetic diseases in peripheral nervous system. We have learned lots of information from animal models, but their genetics are yet exactly same as those of CMT1A patients. Recently, in the Lee lab, the CMT1A--hiPSC-derived Schwann cells have provided us a new insight on the disease mechanism that is shared with Schwann cells derived from CMT1A-PDG-hESCs and induced neural crest of CMT1A fibroblasts. Furthermore, we now can generate myelination-competent human Schwann cells for future cell replacement therapy for many PNS diseases.

Despite of huge success of human iPSCs, there are several hurdles to overcome, such as arduously tedious time for its derivation/specification and cellular maturation issues. One potential solution is direct conversion technique. In 2014 we published a paper reporting direct conversion of human fibroblasts into induced neural crest (iNC) with single transcription factor (SOX10). As the SOX10-based iNC turns out multi-potent and behaves as their in vivo counterpart, it is a very interesting question if iNC can be ‘pattern-able’ during direct conversion process. On the other hand, we set out a chemical compound screening to replace SOX10, for generating chemically-induced neural crest (c-iNC). Our ‘genetic-factor free’ direct conversion will provide us unique opportunities to find mechanistic insight and potential malleability of c-iNC cell fates.