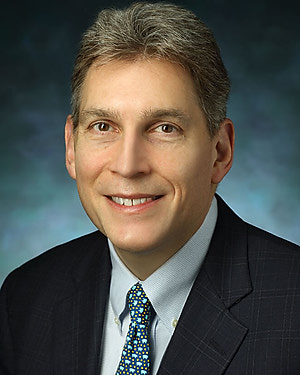 Distinguished pediatric surgeon Samuel M. Alaish, M.D., joined the Johns Hopkins Children's Center in 2015 to co-lead The Hopkins Resource for Intestinal Vitality and Enhancement (THRIVE), a multidisciplinary program dedicated to the study and care of children with short bowel syndrome, a condition marked by insufficient gut tissue or poor gut function due to acquired or congenital diseases.

Alaish, an associate professor of surgery and surgical director of THRIVE, is a leading authority on pediatric intestinal disorders. Prior to Johns Hopkins, he worked at the University of Maryland, where in 2009 he launched a pediatric intestinal rehabilitation program.

"Dr. Alaish has an impressive track record not only as a pediatric surgeon but also as a prolific researcher whose clinical encounters and surgical experiences have driven him to study the mechanisms behind the diseases he sees in clinic and in the operating room," says David Hackam, M.D., Ph.D., Johns Hopkins' pediatric surgeon-in-chief.

"This combination of clinical acumen and scientific curiosity make Dr. Alaish a perfect fit for a place like the Johns Hopkins Children's Center, the cradle of pediatric academic medicine in this country."

Alaish's interest in short bowel syndrome was sparked by his clinical encounters in the neonatal intensive care unit during his fellowship. Originally, Alaish had set out to study and develop treatments for liver damage caused by a condition known as cholestasis - the abnormal and often-corrosive backup of fat-dissolving bile in the liver that scars the organ over time. Cholestasis and related complications, which claim the lives of thousands of newborns each year, are most commonly seen in babies born with a rare condition known as biliary atresia, marked by malformed bile ducts that prevent the normal drainage of bile from the liver into the intestines. However, during his rounds Alaish noticed that bile backup was also rather common among babies with short bowel syndrome and among premature babies who require intravenous nutrition known as TPN. Some babies on TPN would develop severe cholestasis and some would do just fine, Alaish observed, and physicians had no way of predicting which course a baby would take. Suspecting that genes were at play, Alaish took his questions to the lab. There, Alaish and colleagues found that mice carrying certain genes were more prone to developing cholestasis.

Then something else caught his attention: Animals with cholestasis had leakier intestinal walls that made it easier for dangerous gut bacteria to escape into the bloodstream and cause serious invasive infections, a common and dreaded complication seen in infants. In addition, Alaish noticed that animals with such leaky walls had abnormal bacterial content in their guts. The gut harbors trillions of bacteria - some of them beneficial, some of them potentially harmful - that live in a delicate balance. However, a disruption in this equilibrium can fuel overgrowth of "bad" germs. So if leaky intestinal walls and altered bacterial population in the gut occurred hand in hand, Alaish's next question became: "Which comes first?"

Alaish says he plans to pursue that answer at Johns Hopkins, both in the lab and in clinic. The insights, he says, could lead to more effective and less toxic treatments for intestinal infections than traditional antibiotic therapy. In addition to promoting bacterial resistance and making pathogens impervious to drugs, antibiotics can encourage the growth of hard-to-treat fungal infections.

"Being at Johns Hopkins will allow me to build on my previous research and clinical expertise, take my scientific pursuits to the next level, and, hopefully, benefit more patients and have greater impact," Alaish says. "Improving patient outcomes through research in the lab and in clinic is at the very heart of THRIVE."

A native of Maryland, Alaish earned his undergraduate degree in biomedical engineering from Duke University and medical degree from the University of Maryland. He completed a surgical internship and surgical residency at the Medical College of Virginia, followed by a fellowship in pediatric surgery at New York-Presbyterian Hospital. He went on to become assistant professor of surgery at Columbia University in New York and at New York-Presbyterian Hospital. Alaish was division chief of pediatric surgery at St. Vincent's Hospital at New York until 2002.

In 2002, Alaish became director of the pediatric chest wall reconstruction program at the University of Maryland, where he also went on to found and lead the pediatric intestinal rehab program. He led the division of pediatric surgery at St. Agnes Hospital in Baltimore from 2006 until 2015.

In addition to intestinal surgery, Alaish performs a variety of surgeries for newborn anomalies as well as esophageal, gastrointestinal and biliary reconstruction and minimally invasive surgery on infants and children of all ages. He also specializes in the correction chest wall deformities.

Alaish has been voted one of "America's Top Surgeons" by the Consumers' Research Council of America five times, including most recently in 2014.

He is married to Laura M. Fayad, M.D., an associate professor of radiology and radiological science and chief of the musculoskeletal section at the Johns Hopkins University School of Medicine. They have two children, a daughter and a son.