Cellular and Molecular Factors Regulating the Survival and Differentiation of Retinal Photoreceptors and Neurons. 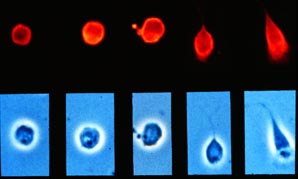 Isolated photoreceptors have an intrinsic program that allows them to develop a highly polarized phenotype even when grown in vitro in the absence of contact-mediated cell interactions. The figure illustrates changes in the distribution of subcortical cytoskeletal elements during this process.

Normal vision requires the coordinated activities of several specialized retinal cell types, including cone and rod photoreceptors, horizontal, bipolar, amacrine and ganglion neurons, and glial cells, which are organized in a topographically precise laminar pattern in the mature retina. In the early embryo, however, the future retina appears as a very simple neuroepithelium, in which all cells are morphologically homogeneous and mitotically active. The development of each retinal cell, therefore, involves a series of divisions, including a critical "terminal" mitosis, after which the cell migrates to one of the retinal layers, differentiates into a cell type consistent with its intraretinal position, and forms synaptic contacts with appropriate pre- and post-synaptic partners. Many of the cells, in addition, undergo programmed death during retinal development. Understanding the cellular and molecular mechanisms regulating these phenomena is important not only because of their intrinsic relevance to developmental neurobiology, but also because alterations of these and related mechanisms appear to be involved in the genesis of blinding degenerative diseases such as retinitis pigmentosa and macular degenerations.

This laboratory uses a multidisciplinary approach to study the interaction of genetic and microenvironmental factors controlling the survival and differentiation of retinal cells from chick embryos, and from mouse strains carrying mutations equivalent to those that cause photoreceptor death in human retinitis pigmentosa. The availability of separate, purified monolayer cultures of retinal photoreceptors and neurons has provided useful bioassays to investigate the biological effects of putative regulatory agents (growth factors, extracellular matrix molecules, and retinoic acid). The cultured cells are also amenable to genetic manipulations, such as gene transfection and treatments with antisense oligonucleotides, allowing the investigation of genetic mechanisms involved in cell survival and differentiation. The analytical methodology includes molecular biology, immunocytochemistry, biochemistry, scanning and transmission electron microscopy, autoradiography, and image analysis.