Sickle cell disease is caused by a small or point mutation in the hemoglobin molecule that is found in red blood cells (RBCs).  Hemoglobin and the RBCs are important for carrying oxygen throughout the body in blood vessels.  Because of the mutation, the hemoglobin makes polymers in the RBCs, which causes them to become rigid and abnormally shaped.  Often RBCs appear sickle-shaped, giving the disease its name. These sickle RBCs (sRBCs) get stuck in blood vessels in retina and in many other organ systems, causing the tissue to become ischemic. 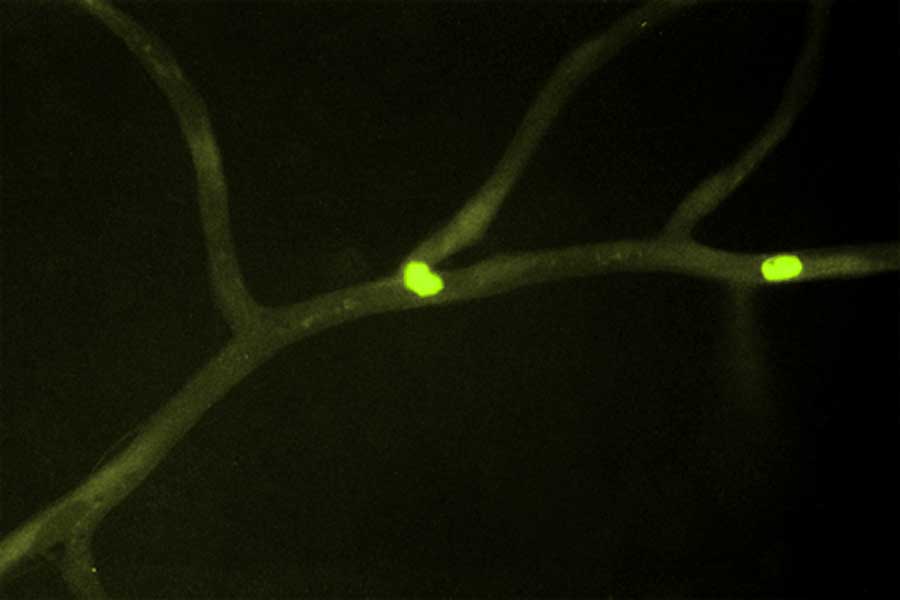 Dr. Lutty's lab has developed a rat animal model for the occlusions caused by sRBCs in which human donor's sRBCs are labeled with a fluorescent dye and injected into the blood of a rat. The number of cells that get stuck in retina can be counted at the end of the experiment (right), allowing therapies to prevent them from getting stuck to be evaluated.

The Lutty lab, with a generous donation from the Reginald Lewis Foundation, has acquired an instrument called a scanning laser ophthalmoscope (SLO) that allows movies to be taken of individual sRBCs moving through the rat retina.

When the retinal blood vessels get occluded and the retina becomes ischemic, angiogenic factors are made in retina. In sickle cell disease, this occurs mostly in the peripheral retina, which does not obscure vision at first. Eventually, the entire peripheral retina of the sickle cell patient becomes occluded and many neovascular formations occur. Using a technique developed by Scott McLeod to look at the retinal vasculature from cadaver eyes in two dimensions, the Lutty lab has studied these occlusion sites and neovascular formations (NV) in great detail. The work has helped clinicians better understand where and how the NV forms and determine their structure, which is very complex and unique (example of NV in sickle cell patient to the right). This information is useful in treating these patients.