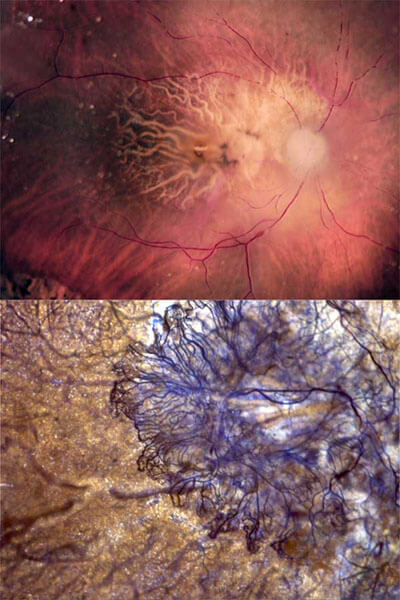 Age-related macular degeneration (AMD) is a disease that affects human retina and choroids and eventually causes loss of central vision in the elderly.  Using our technique to study the human choroid, the Lutty lab has evaluated and quantified the loss of small choroidal blood vessels or capillaries (called choriocapillaris) and the cells that lie just above the choriocapillaris, the retinal pigment epithelium (RPE), to determine which cells die first and what conditions are associated with their degeneration.

When either of these cell types dies, the photoreceptors also die because they lack proper nutrition and their cellular waste cannot be removed.  Using this approach, our lab has found that RPE cells appear to die first in one form of AMD called Geographic Atrophy (dry AMD), and then the blood vessels of choroid die later.  In wet or exudative AMD, choroidal neovascularization (CNV) forms in the macular area, the center of vision.  In wet AMD, it appears that the choriocapillaris dies first, causing the RPE to become unhealthy, and then choroidal neovascularization formsin an attempt to compensate for the loss of choriocapillaris.

The picture to the right shows the appearance of the retina and choroid in a wet AMD subject. With our technique (bottom picture), the choroidal blood vessels are stained blue and the RPE cells are brown; a fan-like CNV formation can be clearly seen, and it is apparent that the RPE are still present over the growing tips of the CNV (edge of the fan-like formation). We have recently found that three inhibitors of neovascularization that are normally found in RPE cells and choriocapillaris are greatly reduced in AMD, perhaps creating an environment where the choroidal neovascularization can form and invaded retina.