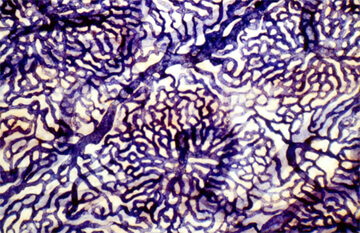 The Ocular Vasculogenesis and Angiogenesis Laboratory at the Wilmer Eye Institute is the laboratory of Gerard "Jerry" Lutty, Ph.D., the G. Edward and G. Britton Durrell Professor of Ophthalmology.  Dr. Lutty's lab, with its highly skilled personnel, studies the development of blood vessels in the eye and how they change in diseases like retinopathy of prematurity (ROP; formerly called retolental fibroplasia or RLF), sickle cell and diabetic retinopathies, and age-related macular degeneration (AMD).  Dr. Lutty believes that a better understanding of the normal development and function of blood vessels will result in a greater understanding of what happens to them in disease processes like diabetes and AMD.

Ischemic retinopathies, one group of diseases which includes diabetic and sickle cell retinopathies, occur because blood vessels in the retina become blocked or occluded by blood cells sticking to the endothelial cells which line the blood vessel wall.  This change in blood flow causes the neural tissue in the retina to have insufficient nutrients and oxygen, i.e. become ischemic.  Ischemic retina releases substances that stimulate the growth of abnormal new blood vessels (neovascularization), which can leak and break and eventually can cause blindness.

Our lab examines the factors that stimulate new blood vessels, angiogenic factors, and naturally occurring inhibitors of angiogenesis, antiangiogenic factors.  The ultimate goal of the lab is to develop therapies to stop the blood vessels from being blocked in ischemic retinopathies and inhibit the growth of neovascularization.  This is being accomplished by merging nanotechnology with biological therapies.  These efforts are designed to build a new generation of therapeutics.

The therapeutics that are being developed utilize nanofabrication techniques to generate therapeutic nanoparticles that, when delivered to the eye, allow the tissues of the eye to essentially treat themselves only when needed.  The goal of these studies is to have the tissues generate their own therapeutics when needed and stop production when the condition is resolved.  These therapies will help reduce the need for repeated treatment and provide focused therapy, rather than treating the body with chemicals.