Jane, a live liver donor, flew from Utah to Baltimore during the COVID-19 pandemic to provide hope for a stranger named Deborah who was suffering from polycystic liver disease. Surgeons at Johns Hopkins performed the successful procedure. 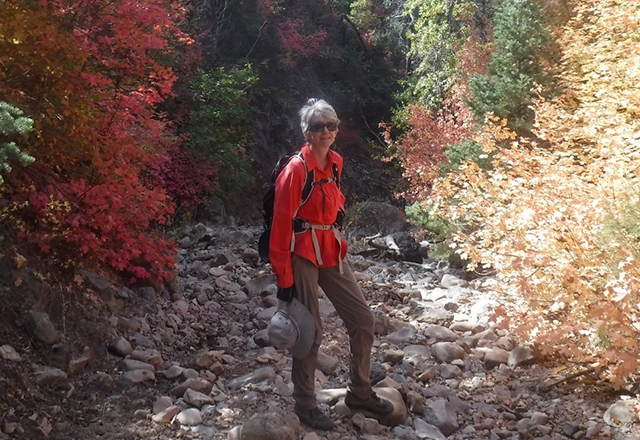 "What would make a person do something like that?" Benjamin Philosophe, M.D., Ph.D., wonders aloud, thinking about Jane Kelly, the 55-year-old veterinarian from Utah who arrived in Baltimore ready to give part of her liver to someone she’d never met.

With all his experience in transplant surgery, Philosophe has helped hundreds of patients recover their life and health. He has also worked with hundreds of live donors who have offered to help save someone else, most often a child or family member. But Jane Kelly stands out in his mind.

Some healthy people don't think much about their good fortune, but Jane Kelly thinks about it — a lot. In 2010, Jane, then 45, volunteered to donate one of her kidneys to a stranger.

For Jane, it was a straightforward act of gratitude. "The whole thing started when I realized things were going really well for me as a person," she says. "I saw information online about living kidney donation, and thought it would be a great way to give back and save a life. Just incidentally, my neighbor went ahead after hearing my story and donated a kidney."

Jane did well with that donation. Two years afterward, she ran the Boston Marathon.

In 2015, Jane began to ponder other ways to give back, and started researching live liver donation online. She soon learned that, compared with donating a kidney, a live liver donation is a lot to go through. A local hospital told her that she wouldn’t be eligible because she had turned 50.

Jane gave up, but only for a while. In 2020, further research led her to the Comprehensive Transplant Center at Johns Hopkins, where she heard the answer she'd hoped for: Yes, she could donate.

But there was a problem: The coronavirus had begun to spread. “I flew to Baltimore in March to get my blood testing and imaging done at Johns Hopkins,” Jane says. “I left my appointment and was on the hospital concourse, getting ready to take the subway back to the airport, and they had just closed the stop due to the COVID-19 pandemic.

"Everything was on hold until the summer, but [patient services coordinator] Kathy Lee, [nurse practitioner] Ashley Wells and the transplant team continued the preparations. I thought it was amazing that Johns Hopkins could make this donation happen in the middle of the pandemic," Jane says. 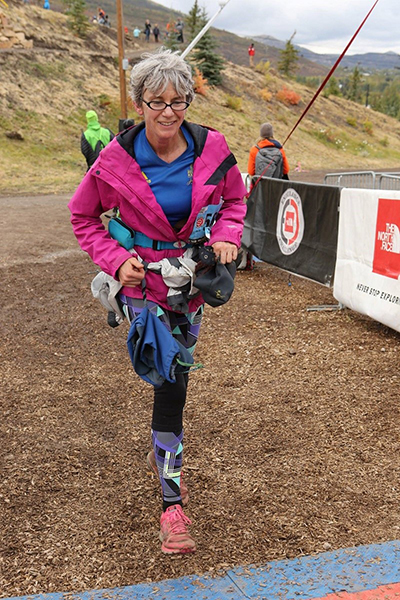 Jane, participating in a 50K ultramarathon in 2016.

Jane completed her pre-procedure testing at home in Utah. Philosophe explains that the tests check for any genetic risk for liver disease or blood clots.

Once Jane arrived in Baltimore, Philosophe’s team performed CT scans and an MRI of her liver, bile ducts and blood vessels, some in 3D, to chart her liver anatomy carefully and ensure a well-planned surgery.

The team calculates how much liver tissue is needed based on the recipient’s weight. He notes that 85% to 90% of the time, surgeons choose the donor’s right lobe. If the recipient is a child or a small adult, a donation from the left lobe can work, which tends to be safer for the donor, since less liver tissue is taken, Philosophe notes. But Jane agreed to donate her larger right lobe, leaving her with a smaller portion of liver to sustain her own body.

When the transplant team matched her with a recipient, Jane flew back to Baltimore on July 24, on the chance that her bloodwork would match the recipient’s and the procedure could proceed. She stayed in a hotel for three days, doing a little physically distanced sightseeing in Baltimore. She got word on the 27th that all the test results were in, and surgery was happening the next day.

"That night, I thought back to the kidney surgery, and having that under my belt helped. I was not one bit nervous about the surgery. I just knew nothing bad would happen, and that I was in good hands."

Donors like Jane are good people who want to help the world.

The disease causes uncontrolled growth of fluid-filled cysts that usually affect the kidneys. But in about 8% of cases, Deborah’s included, PKD attacks the liver. Filled with multiplying cysts, Deborah’s liver grew, increasing painful pressure on her lungs and other internal organs. It was hard for her to breathe or digest her food.

The massive liver cysts caused her belly to enlarge. “I looked like I was nine months pregnant,” Deborah says.

Though other hospitals offered to enroll Deborah in clinical trials for treatment, the only known solution was a liver transplant. Family members wanted to help, but were not suitable donor candidates. “How will I find a liver if it’s not from someone who loves me?” Deborah wondered.

She reached out to Johns Hopkins in February and went through the testing regimen, making it onto the transplant list in May. On July 16, 2020, amid the COVID-19 pandemic, Johns Hopkins called Deborah and told her to come to Baltimore: She had a donor.

Philosophe explains that preparing a live liver donor typically begins early in the morning, about 7:30. The donor’s procedure lasts about five hours; the recipient’s, about seven. The day usually ends around 5 p.m.

“The surgery itself requires large teams,” Philosophe says. He headed the surgical group performing Jane’s donation procedure while his colleague, chief surgeon Andrew Cameron, M.D., Ph.D., and his team worked in the adjacent operating room on Deborah’s transplant. Other surgeons, fellows, residents and students assisted on both sides.

Plastic surgeons, equipped with microscopes, assisted with the delicate microsurgery required to painstakingly sew the small blood vessels on Jane’s liver section to their counterparts in Deborah’s body. 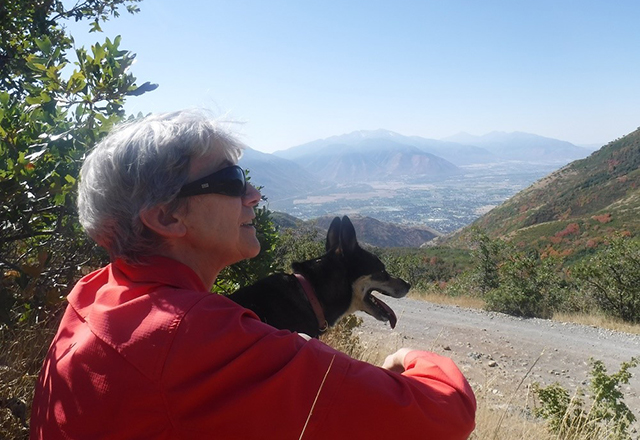 Jane enjoying a hike with her dog, post-surgery.

“Recovering is more painful for the donor than recipient,” Philosophe explains. Unlike the recipient, who has been living with liver disease, a donor is typically a very healthy person who has never been sick or had surgery. Donors go through a lot,” he says.

Philosophe and his team provide a robust regimen of pain control to ease the surgery for donors, who stay in the hospital for about five days. After they leave the hospital, out-of-area donors like Jane remain in town and see their surgeons as outpatients for two more weeks before they are cleared to return home. Even after that, Philosophe says, he follows up with his donors to ensure they are healing from their surgeries.

Jane almost missed meeting Deborah, since both were eager to leave the hospital after spending weeks away from family.

“I knew my daughter was coming from the airport to pick me up, and I was afraid I’d miss seeing the person who got my liver donation,” Jane says. “Once I’d started walking the halls, I wondered if I might run into Deborah; I knew her name by then. But on that last day, they let us meet.”

Jane and Deborah finally shared a hug on the 11th floor of the hospital’s Zayed tower. Jane says, “It was very emotional, seeing Deborah looking so well, and realizing that part of my liver was working inside her body.”

“I just blubbered,” Deborah says. “How do you thank someone for that?”

Deborah says her recovery is slow, but she is feeling better every day. She is hiking local mountain trails and looking forward to returning to work without pain and discomfort. “Now that I can breathe normally, I can once again enjoy being more physically active,” she says.

Jane’s energy level is returning, too. “The first week I didn’t feel great, and the flight home was hard. I took a week off and returned to activities gradually, getting my strength back. It was a little frustrating, but I knew I had to give myself time.”

Still, Jane says the whole adventure was well worth it. “It’s not easy,” she admits. “But the rewards, the opportunity to save a person’s life is worth every ounce of pain. I’ve gotten as much out of it as Deb.”

Where does Jane get her inspiration? “I’m not religious,” she says. “I would describe myself as a driven, goal-oriented person. But honestly, for me it was just a desire to make an impact, to do my little bit so that when I’m on my deathbed, at least I’ve done that.”

Philosophe says that he’s moved by Jane’s donation, considering the added risk of getting on a plane alone and traveling to Baltimore as a new viral illness ravaged the country. He describes her courage as an inspiring light in the midst of dark times.

“When we see so many people who are unwilling to make even small sacrifices to keep others safe during the COVID-19 pandemic, Jane’s willingness to give up so much is especially remarkable,” he says.

“It’s not trivial. There’s pain and suffering. There’s time away from work and family. There is risk. Live liver donation really is a tremendous sacrifice and takes donors like Jane, good people who want to help the world.”

The Gift of Life

Many people with serious illness are waiting for health and hope through a live kidney or liver donation. Learn more about living organ donation at Johns Hopkins.
back to top button