A Different Kind of Commute: Biking to Work Provides More Than Just Exercise for Doctors - 08/21/2013

A Different Kind of Commute: Biking to Work Provides More Than Just Exercise for Doctors 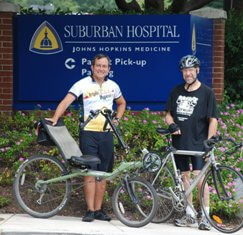 Bethesda, Md., (August 21, 2013) – When it comes to exercise, Suburban Hospital doctors practice what they preach. For example, Keith Horvath, M.D., started biking to work five years ago. The Georgetown resident and Suburban Hospital’s chief of cardiothoracic surgery rides his recumbent bike eight miles each way to and from the hospital three to four times per week from March to December. “I had finished the P90X workout program and wanted a way to regularly incorporate exercise into my daily routine,” said Dr. Horvath about his preferred two-wheeled mode of transportation. Besides the exercise, biking also allows him to think. “It’s less hectic than driving and I use the time to mentally outline research and clinical projects that I am working on,” he said.

The benefits of biking are numerous. According to statistics from Bikes Belong, bike commuters report lower stress and greater feelings of freedom, relaxation, and excitement than car commuters. Adults who bike to work also have better weight, blood pressure, and insulin levels. And on a round-trip commute of 10 miles, bicyclists save around $10 a day.

Dr. Horvath switched to a recumbent bike from a regular upright bike several years ago. “It’s much easier on your back, neck and arms,” he said. And his route along the Capital Crescent Trail makes the ride safer and easier. “The trail is a fantastic resource,” he said, and encourages others to join him.

Dr. Horvath’s Suburban colleague and interventional radiologist Brad Dick, M.D., also pedals his way to work seven miles each way from Potomac on his 18-speed road bike. He originally made the switch from car to bike back in 1978, but has been biking to Suburban Hospital since 2008 when gas prices first hit the $3 a gallon mark. He makes the trek several days a week as weather permits and as long as he doesn’t have meetings after work. Sometimes he’ll take the long way home on purpose just for the added exercise, which he cites as the #1 benefit. “Stress reduction and money saved are a close second and third place,” he said, and added that parking is never an issue either.

About Suburban Hospital
Suburban Hospital, a member of Johns Hopkins Medicine, is a not-for-profit, community-based hospital in Bethesda, Maryland, that has served Montgomery County and the surrounding area for almost 70 years. Suburban Hospital is distinguished by a cutting-edge stroke program; level II trauma center; centers of excellence in cardiac care, orthopedics and joint replacement surgery, neurosciences and oncology; state-of-the-art diagnostic and treatment tools; and affiliations with world-class institutions, including the neighboring National Institutes of Health.