Sudden Cardiac Arrest Is No Match for Community CPR 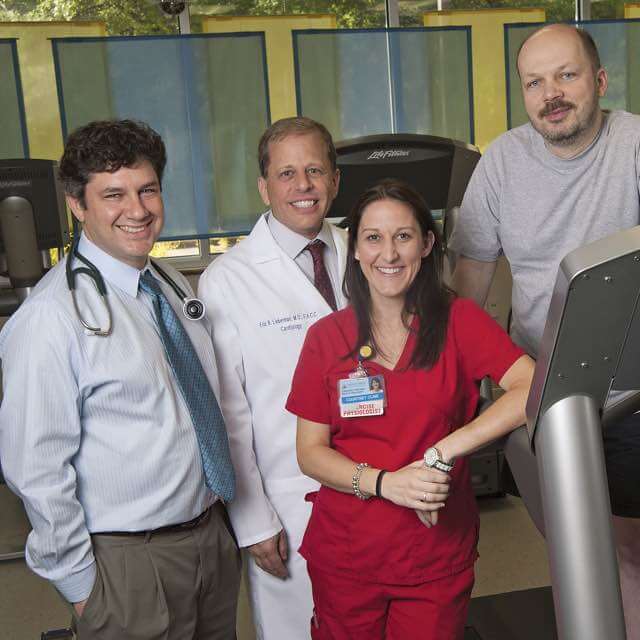 A friendly badminton game at the Friendship Heights Community Center gym almost took the life of Potomac resident Falko Koehler last spring. The 48-year-old information technology consultant was about to return a serve when he suddenly collapsed and stopped breathing.

One of his rescuers was Alex Colwell of Takoma Park, D.C. Colwell had learned CPR as a teenager and had just completed an infant CPR class in preparation for the birth of his son, Jack. While a staff member called 911, Colwell began chest compressions and mouth-to-mouth breathing. He and the gym staff then attached Koehler to an automatic external defibrillator (AED), which Colwell had learned to use in his CPR class. They shocked Koehler twice and he eventually became more responsive as the EMS team arrived, administered emergency care and rushed him to Suburban Hospital. Dr. Edward Healy of Johns Hopkins Community Physicians (JHCP) Heart Care was the cardiologist on call for the Emergency Department that day. “Mr. Koehler had essentially died at the gym, and yet within a relatively short period of time after that he was alert and talking to me,” recalls Dr. Healy. “To me that is a testament to how effective bystander resuscitation can be.

“Most people who die from a cardiac event outside of the hospital don’t die from a blockage in the artery—they die from an arrhythmia,” Dr. Healy continues. “That is why defibrillation is so successful. When someone is in cardiac arrest, the most significant issue with their survival is the amount of time it takes to get them out of that fatal heart rhythm.”

Dr. Eric Lieberman, an interventional cardiologist with JHCP Heart Care, was called in on that Saturday to perform a coronary angiogram, which identified critical blockages in all three of Koehler’s main coronary arteries. According to Dr. Lieberman, the blood chemistries were also abnormal, reflecting injury to Koehler’s liver and kidneys from the lack of blood flow during the cardiac arrest. After a 36-hour period to allow the vital organs to recover, cardiac surgeon Michael Siegenthaler, M.D., performed coronary artery bypass surgery.

“Mr. Koehler had significant multi-vessel disease, including a lesion in his left descending artery that is highly associated with sudden cardiac death. In light of these severe blockages, surgery was the best option,” he says. Koehler was discharged home five days after the surgery with no residual neurological damage. He continues to participate in cardiac rehabilitation at Suburban Hospital. “Whereas most people would have some neurological injury following a cardiac arrest, the prompt administration of CPR and defibrillation helped Mr. Koehler recover without any injury to his brain,” notes Dr. Lieberman. “This is a good call to action for more people to be trained in CPR.”

“This was the first and only time I ever had to give CPR,” says Colwell. “I was on autopilot. I was so glad I had taken those classes. CPR is simple to learn and to do.”

“I am extremely grateful to so many people,” says Koehler. “Without the intervention of Alex Colwell, the gym staff and the EMS providers, I would never have made it to the hospital alive. And across the board, everyone at Suburban Hospital, from the housekeeping staff to the nurses and doctors, was wonderful. They took a personal interest in me.

“They treated me as if I were a celebrity,” adds Koehler. “Staff kept coming into my room to check on me and introduce themselves. Drs. Lieberman and Healy often stopped by and I enjoyed speaking my native German language with Dr. Siegenthaler, who is originally from Switzerland.”

“Falko called me about a month after the incident,” says Colwell. “I went over to his house and we talked about the event and, because I am a professional piano tuner, I tuned his piano!”

Less than one-third of sudden cardiac arrest victims are administered immediate CPR from bystanders. Through a variety of programs, the American Heart Association is equipping people and communities to act in emergencies and ultimately save lives. To register for a Community CPR class, go to http://events.suburbanhospital.org.