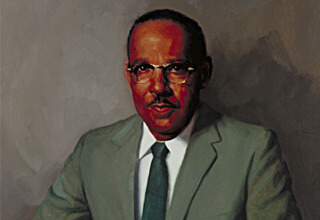 The Vivien Thomas Fund was established to increase diversity at The Johns Hopkins University School of Medicine, thus honoring the memory of a heart surgery pioneer by removing for others the economic and racial barriers that often stood in his way.

Denied a chance to become a doctor by the Great Depression, and initially denied the recognition he deserved for his work by old racial prejudices, Vivien Thomas proved that genius, persistence and ability can transcend artificially imposed restraints. His story now has been immortalized in the HBO film "Something the Lord Made," in the National Magazine Award-winning article with the same name, as well as in the PBS documentary "Partners of the Heart."

At Johns Hopkins, the word "breakthrough" rarely is used.  But Vivien Thomas was a pivotal player in the development of a true breakthrough at The Johns Hopkins Hospital just 60 years ago. Working with surgeon Alfred Blalock and pediatric cardiologist Helen Taussig, Thomas was part of a team that devised a means to correct a congenital heart defect known as Tetralogy of Fallot, or Blue Baby syndrome.

Before that time, the heart was off-limits to surgeons. Now, heart surgery is so common that in 2001 alone, 6 million patients had heart procedures. Patients leave the hospital just days after their operation. Imaging techniques developed because of heart surgery make it possible to reach the heart and correct many defects without even opening the chest. It’s hard to believe the number of changes that can be traced to a courageous team.

While that passion to discover and cure hasn’t changed at Hopkins, Vivien Thomas would be pleased to know that some things have changed.

Not only was operating on the heart considered taboo in the 1940s, but the social establishment demanded clear separation between the races. Thomas’s intelligence and dexterity won him the position of Blalock’s lab technician, but it took more than 25 years before Thomas was credited publicly for his role in devising the Blue Baby surgery. In 1976, The Johns Hopkins University awarded him an honorary doctorate. Today, his portrait hangs in the lobby of the Blalock Building at The Johns Hopkins Hospital, across from the image of Alfred Blalock.

That Hopkins is no longer a southern institution in a southern city is shown by statistics. In 2004, more than 11 percent of our medical students are black, and more than 60 of our full-time faculty, including such stars as surgeons Levi Watkins, Ben Carson, Edward Cornwell, and Vice Dean for Education David Nichols.

Just as we’re continuing to push forward in treating heart disorders -- even using stem cells to replace damaged heart muscles -- we’re not stopping where we are with diversity. We’re determined to improve opportunities for all at Johns Hopkins Medicine. That’s the best tribute we can make to the remarkable story of Vivien Thomas. With revenue from the Vivien Thomas Fund, Hopkins is committed to reaching out aggressively to groups now considered under-represented minorities to ensure the broadest possible talent pool in academic medicine and biomedical science. Our mission requires excellence, and there can be no excellence without diversity.

Contribute to the Vivien Thomas Fund

To contribute to the Vivien Thomas Fund, please contact: