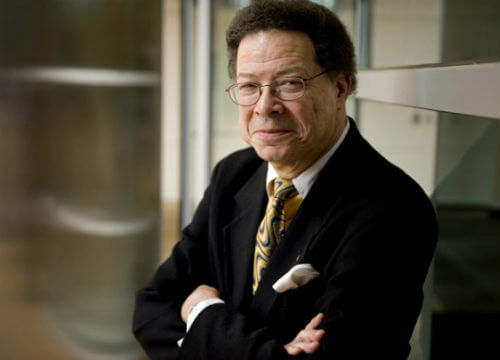 Levi Watkins Jr., M.D., a pioneer in both cardiac surgery and civil rights who implanted the first automatic heart defibrillator in a patient and was instrumental in recruiting minority students to the Johns Hopkins University School of Medicine, died April 11 due to complications from a stroke. He was 70.

“Levi was such an important role model in the minority community. His work went so far beyond the hospital,” says Duke Cameron, cardiac surgeon-in-charge in The Johns Hopkins Hospital and professor of surgery at the Johns Hopkins University School of Medicine. “There are just so many people—nonmedical people—who saw Levi Watkins as somebody they were so incredibly proud of. And he was a spiritual leader for them too. He probably spoke at more churches than medical meetings.”

“Levi remained as powerful a presence and as important an influence on Johns Hopkins as he was when he arrived here in 1970 as a general surgery intern,” says Paul B. Rothman, dean of the medical faculty and CEO of Johns Hopkins Medicine (served from 2012-2022).

Johns Hopkins’ first black chief resident in cardiac surgery, Watkins played a pivotal part in changing the institution’s role in medical education from his earliest days. In 1975, he helped launch a concerted nationwide drive to recruit talented minority students who were interested in studying medicine. Within a few years, Johns Hopkins was attracting black students from all over the nation who were convinced by Watkins that Johns Hopkins wanted them. The success of the Johns Hopkins minority recruitment campaign soon made it a model imitated by other medical schools.

Celebrating the Life and Legacy of Dr. Levi Watkins Jr.

Levi Watkins Jr., a pioneer in both cardiac surgery and civil rights, was best known for implanting the first automatic heart defibrillator in a patient, recruiting minority students to the school of medicine and founding the annual Johns Hopkins Martin Luther King Jr. Commemoration. This video was shared during a memorial tribute on Sept. 24, 2015.

In 1980, Watkins gained renown for implanting the first automatic heart defibrillator in a patient suffering from repeated, life-threatening episodes of ventricular fibrillation, or irregular heartbeats. Such a procedure now is commonplace, saving untold lives annually.

In 1991, Dr. Watkins was promoted to full professor of cardiac surgery and vice dean for postdoctoral programs and faculty development. He would have an immense impact on postdoctoral education in the country by establishing the nation’s first postdoctoral association at Johns Hopkins, another pioneering effort that has been emulated elsewhere.

In 2008, a group from the Class of 1983 joined forces to begin a fundraising campaign for their upcoming 25th Reunion to pay tribute to Dr. Watkins. In June 2009, the group gathered at a reception to announce the Levi Watkins, Jr., M.D., Endowed Scholarship Fund. The scholarship was fully funded in 2010, thanks to the support of many alumni and of Dr. Watkins himself. This scholarship recognizes Dr. Watkins' groundbreaking accomplishments, honors his vision of bringing underrepresented minority medical students to Johns Hopkins and provides essential financial assistance.

Watkins, who retired in December 2013, founded the Johns Hopkins Martin Luther King Jr. Commemoration in 1982 and hosted the event every year. At the 33rd annual event on Jan. 9, Watkins was honored with the official unveiling of his oil portrait. He died just a week after the portrait was formally installed in the Division of Cardiac Surgery in the Sheikh Zayed Tower.

Gifts in memory of Dr. Watkins can be made to the Levi Watkins, Jr., M.D., Endowed Scholarship Fund at the Johns Hopkins University School of Medicine. Please make checks payable to The Johns Hopkins University and include a note that the gift is in Dr. Watkins' memory. Send gifts to the School of Medicine Development Office at 750 E. Pratt St. 17th Floor, Baltimore, MD 21202. Gifts can also be made online at secure.jhu.edu/form/somt. Please call 410-361-6533 if you have any questions.