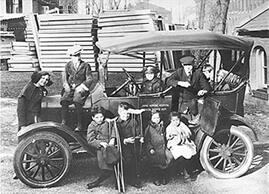 1920's Johns Hopkins Social Services Car - used to
transport patients back and forth to the hospital.

While we were not the first hospital-based department of its type, it was because of the impressive efforts of Dr. William Osler, the first chief of medicine at Johns Hopkins Hospital, that the importance of medical social work as a profession was first acknowledged. He recognized that in order to treat a patient entirely it was important to not only address their physical conditions but their emotional and social needs as well.

He accomplished this by having the medical residents become student board members of the nearby Charity Organization Society, starting in 1903. In October 1907, eighteen years after the hospital first opened its doors and began treating patients, it established its own Department of Social Services.

For the first few years, the department consisted of one person, Miss Helen B. Pendleton and later followed by Miss Helen S. Wilmer. These dedicated women worked tirelessly to ensure that all patients, regardless of their background, received necessary services and treatment. This included acquisition of eyeglasses, clothing, medications, leg braces, and dental work. Many of the expenses required to meet these goals were paid out of their own earnings.

Additionally, the social worker was instrumental in making connections with local clergy and generated a list of volunteers who could be called upon to meet the spiritual needs of patients while they were hospitalized. With the help of the Enoch Pratt Free Library and the Women’s Auxiliary Board donations, the department also created the hospital’s library which was available to everyone on campus. During the 1920’s the role of social work expanded throughout the hospital and additional funding was subsequently needed. In order to meet these financial demands, the social work department was responsible for running fundraisers and rummage sales. This eventually led to the creation of the Carry On Shop, which is still a booming source of income for the Women’s Auxiliary Board.

After 100 years, the Social Work Department essentially fulfills many of the same roles and responsibilities as it did when it was first created. Over time, the department has placed an additional focus on providing emotional support to patients and their families as well as linking patients with resources not only in the hospital but in their own communities.

In 1996, the Social Work Department decentralized into five separate departments, consisting of Medicine and Surgery (including Emergency Medicine), Pediatrics, Oncology, HIV/AIDS, and Psychiatry. In order to enhance communication and ensure consistency among all of the departments, the Social Work Council was established involving the directors of each department.