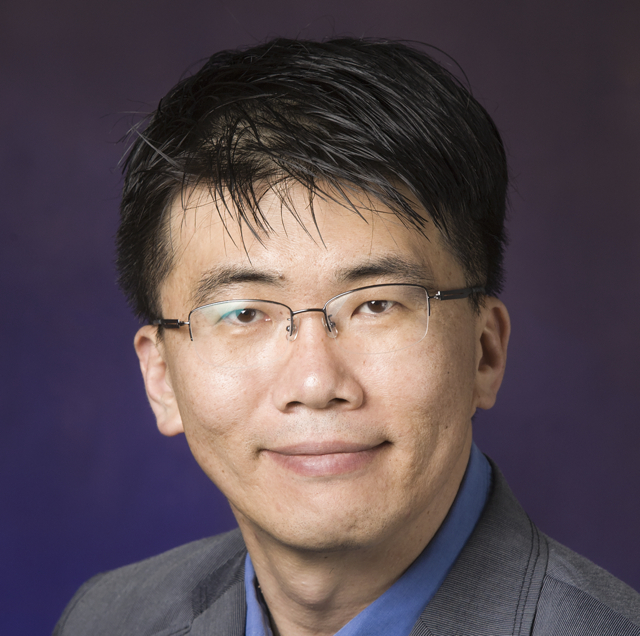 Taekjip “T.J.” Ha is a professor of biophysics and biophysical chemistry and of biomedical engineering. He brings the perspective of a physicist to the study of individual biological molecules, especially DNA and the enzymes that work on it.

You study biological molecules, but your training is in physics. How did you make that transition?

HA: In grad school at Berkeley, I was interested in solid-state physics and decided to build an instrument that would advance our study of crystals and other solids. Once it was done, my advisors and I realized that the instrument would be more useful for detecting emission of light, or fluorescence, from single molecules. There was a technique, called FRET (fluorescence resonance energy transfer), that was already being used to learn about interactions from a large number of molecules in test tubes. The molecules would “glow” one color if they were not interacting and would “glow” another color if they were. With the new instrument, we could apply that same technique to single molecules. The technology was so new that I became the world’s expert overnight! Every measurement I took was being taken for the first time.

What do you work on now?

HA: I’m still studying individual biological molecules to learn about the physical properties of DNA and the enzymes that work on it. When molecules are studied in test tubes — as they often are — what is actually observed is an average of the behavior of billions or trillions of molecules. In real life, identical molecules have different “personalities.” They don’t all do the same thing under the same conditions. They are more like college kids than robots. We can learn a lot more about how molecules function when we study them as individuals.

What have you been working on lately?

HA: One thing we’ve been studying is an enzyme called Rep helicase. As a helicase, its job is to unwind double-stranded DNA into single strands so that that the DNA can be duplicated. We knew that Rep had two configurations, open and closed, but we didn’t know which one was responsible for unwinding DNA. To find out, we chemically “glued” the helicase shut to see what it did. It turns out that we created a superhelicase. A normal helicase needs additional helicases to help it unwind DNA. Together, they unwind a few dozen pairs of DNA letters before stopping. Our superhelicase can unwind thousands of letter pairs on its own without getting “tired.”

HA: There are two that could revolutionize access to important technologies by reducing the costs and equipment needed. The first application is for DNA sequencing, which can only be done on single-stranded DNA. We think we can improve a product already on the market. Another group engineered a tiny protein tube just wide enough for a single strand of DNA. The electrical current flowing through the tube depends on each letter of DNA. By measuring the current as DNA comes through the tube, we can decipher the sequence of the letters. Right now, the technology uses a regular helicase to unwind the DNA one pair of letters at a time. We are collaborating with the company to test our superhelicase, which can unwind long stretches of DNA at a measured pace, unlike regular helicases. We can even control its pace by adjusting the amount of energy — in the form of ATP — available to the enzyme.
The second application is for making copies of DNA, or DNA amplification, which is used to study genes, identify what kind of bacterium or virus is making someone sick, etc. The traditional technique, PCR, uses high temperatures to separate the two strands of DNA to be duplicated. It’s somewhat slow because a second duplication reaction can only begin after the first one is finished, and PCR machines cost $5,000. If we use superhelicases instead of high heat to unwind the DNA, amplification can happen in a test tube at a constant temperature without the use of electricity or fancy machines. And the reaction happens so quickly that surgeons removing tumors would be able to test the surrounding tissues during the surgery to make sure they got all of the tumor out!


James Berger is a professor of biophysics and biophysical chemistry and of oncology. His lab studies biological nanomachines — proteins that carry out mechanical tasks.