Kristina Nielsen on How the Brain Turns Pixels into Objects

Kristina Nielsen on How the Brain Turns Pixels into Objects

Kristina Nielsen is an assistant professor of neuroscience with the Zanvyl Krieger/Mind Brain Institute. She studies how nerve cells are organized in the brain’s visual areas to enable object recognition.

How did you get into science?

NIELSEN: I come from a scientific family. My dad and uncle are physicists, and one of my grandfathers was an engineer. At university in Germany, where I grew up, I started studying physics because I liked it in school. A physics professor who was involved in neuroscience research gave a talk, and I was completely hooked. All of my research since has been in neuroscience, but my physics background does come in handy pretty often. For example, I built parts of the two-photon microscope we use for many experiments in my lab.

What do you use the microscope for?

NIELSEN: My research focuses on the visual cortex — the part of the brain that allows us to see. We are particularly interested in how the visual cortex “recognizes” objects. It happens so effortlessly that we rarely think about it, but the process is actually so complicated that, to date, no computer system can recognize objects as well as we do. With the two-photon microscope, we can determine how the circuits in the visual cortex that handle object recognition are organized. It’s a very new way to study the brain. Previously, we could only study individual nerve cells (or neurons) one at a time. With the microscope, we can investigate many neighboring neurons at once, which is an important step toward figuring out neural circuit function.

What have you learned so far?

NIELSEN: We’re currently investigating neurons in a processing area of the visual cortex called V4, which is an intermediate stage of the object recognition pathway. Neurons in V4 respond to contour elements — think of breaking up the outline of an object into lots of little parts. Using the two-photon microscope, we can ask whether neighboring V4 neurons respond to similar contour elements. This is an important question because, in order to recognize objects, contour elements belonging to the same object will need to be associated with each other in the brain. If neighboring neurons are responding to related contour elements, this association can occur very efficiently: Connections between neighboring neurons can be kept very short, which speeds up signal transmission.

Indeed, our early findings point to such an efficient organization. For example, in nature and in man-made objects, one motif you often find is a sharp convex tip at the end of two straight lines, like a pine needle or a pencil. In V4, we see cells next to each other that respond to either a convex curve or a straight line perpendicular to that curve. They appear to be working together to represent that one motif.

Do these findings have any implications for human health?

NIELSEN: Well, first of all, our experiments really are basic research, aimed at improving our understanding of the visual cortex. But we expect that figuring out how the brain makes sense of visual stimuli will help with improving computer vision, which would have all kinds of applications.

In terms of human health, the more we understand the brain’s visual processing, the more we can help people with vision problems. For example, there is an effort to develop implants to restore vision in blind people. For these implants to work, a thorough knowledge of how the visual cortex functions normally is absolutely critical.

What do you like to do in your free time? 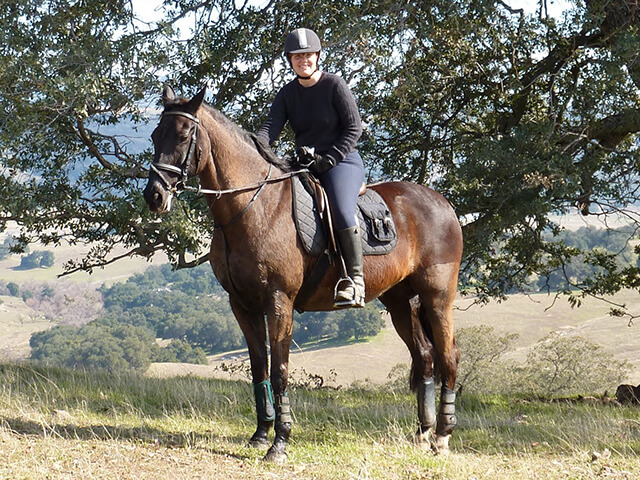 NIELSEN: I enjoy a type of horseback riding called dressage. It’s a bit like gymnastics for the horse, and obviously for the rider as well. I don’t compete; I just ride once or twice a week for fun.

“[Object recognition] happens so effortlessly that we rarely think about it, but the process is actually so complicated that, to date, no computer system can recognize objects as well as we do.” --Kristina Nielsen