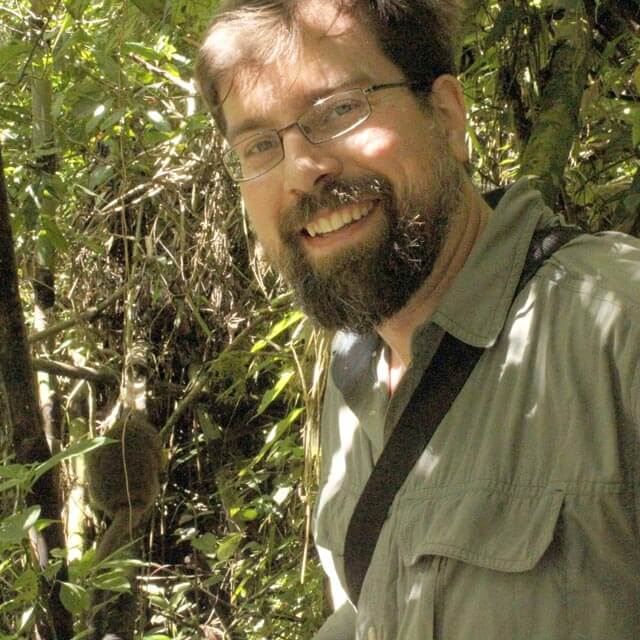 Jonathan Perry in Madagascar with a bamboo lemur (Prolemur simus) in the background.

Jonathan Perry is an assistant professor of functional anatomy and evolution. He studies modern primates to better understand ancient ones.

Tell me, in a nutshell, what you study.

PERRY: Sometimes, I literally study nutshells. I observe living primates and study their anatomy to try to understand how the structure of their skulls, jaws and teeth allows them to eat what they eat the way they eat it—the mechanics of their chewing. I study modern primates to better understand fossilized primates. My goal is to understand how the primate chewing system evolved over time. I focus on the most primitive primates: lemurs and lorises.

What can your studies tell us about modern humans?

PERRY: One of the things that’s really interesting about humans is that we are pretty far removed from the situation that most non-human primates are in. They have to go out every day and find food—enough to feed themselves and their offspring—and get at its nutrients. We humans don’t have to do that. We go to the grocery store and pick up what we want, and most of that food is very heavily processed. So it’s very easy for us, not only to chew but also to break down in our digestive systems. And we can get rather heavy off of it!

Most non-human primates have a skull anatomy that is very finely tuned to the properties of the food they eat. Ours doesn’t have to be. And, in fact, there’s good evidence that over the millions of years that humans have been processing their food, either by breaking it down physically with tools or cooking it with fire, our chewing anatomy has gotten wimpier. Our jaws are actually smaller and weaker than the jaws of our distant ancestors. And our teeth are smaller and probably less effective. Even our chewing muscles are tiny compared to those of other primates.

Why do we have baby teeth?

PERRY: Baby teeth allow us to eat solid food before our jaws are fully grown. If they weren’t replaced by adult teeth, we would have really tiny teeth with big gaps between them as adults. Interestingly, reptiles’ bodies—including their jaws—continue to grow during their whole lifespan, which is why they shed their teeth periodically throughout their lives.

Skull of a monkey fossil (Homunculus patagonicus) from the Miocene epoch (17.5 million years old). This juvenile has some baby teeth and some adult teeth.

Your job is one of those that every kid wants at some point. How did you turn your dream into a reality?

PERRY: I grew up in Alberta, Canada, which has one of the best dinosaur fossil records and the largest paleontology museum in the world. During my undergraduate studies, I worked at the museum and became interested in little things: little mammals and their teeth. Then, I took a primate course, and we watched Jane Goodall videos. I remember sitting on the bus after school thinking about how similar we are to chimps.

When I told my undergraduate advisor that I wanted to study dinosaur fossils, he told me I’d grow out of it, but I still haven’t! I suppose I grew up a little bit when I started to focus on primate fossils.

I went to Duke for my Ph.D. and had an ideal experience. I got to do field work in South America, observed living lemurs in Madagascar and collected fossils in Egypt. I love to travel, and I really enjoy embedding myself in the culture where I’m working as much as possible.